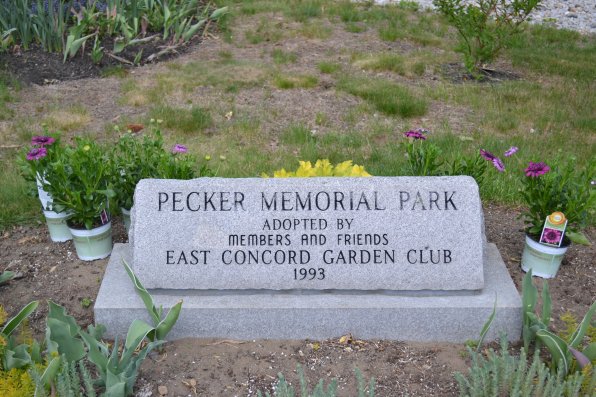 A granite memorial so everyone knows who takes good care of Pecker Memorial Park on Mountain Road. 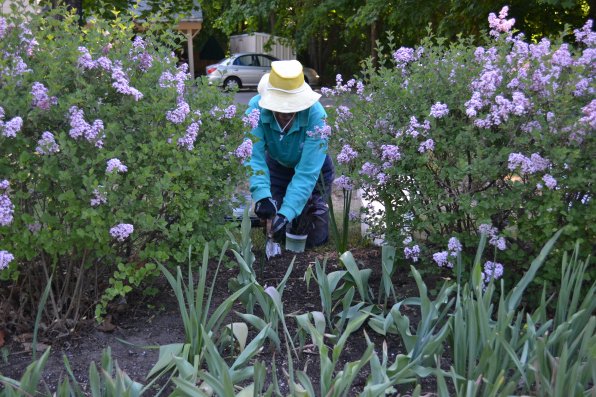 Linda Rost sure did have some nice surroundings during her day at the park. 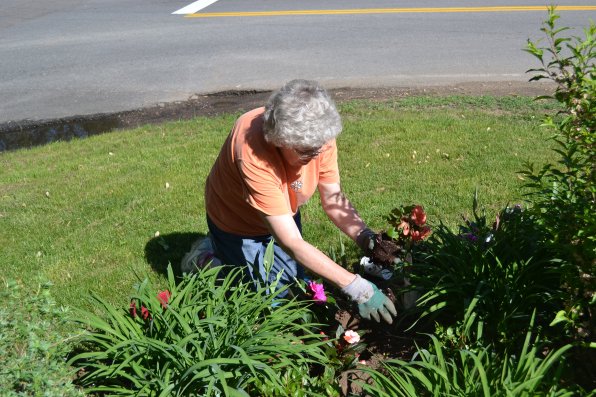 When you drive by Pecker Memorial Park on Mountain Road, doesn’t it just look beautiful?

There are garden beds filled with lilacs, daffodils and tulips, along with luscious bushes and a couple trees; it’s a nice scenic area to drive by on your way to work. Well, you can thank the East Concord Garden Club for the visual pleasure. Every spring for quite a while, and we mean quite a while, the ladies of the club have been weeding and planting, planning and pruning, to give the small area a bright and vibrant look.

And when they’re out doing their thing in the park, they get plenty of waves, honks and compliments.

“They may not know who we are, but they see a bunch of white haired ladies taking care of the park,” said president Doris Glennon.

It’s so beautiful that you probably wouldn’t be all that upset if you were driving that way to reach the other side of town only to find out the Sewalls Falls Bridge is closed. Because at least you’d have the luxury of driving by it again as you retrace your steps.

The park, which is the club’s Adopt-A-Spot in the city and has one of those cool signs with its name to prove it, is just one of the community service projects the group does on this side of Concord on a yearly basis, along with a revitalization to School House Hill and the outside planters at Quality Cash Market.

“We had been working in the park for years and then the Adopt-A-Spot program started,” said Lucile Patten, who has been a member for about 55 years and lives right across the street from the park. “I probably get the most benefit of it from any of our members. It’s been convenient to have me here.”

You’ve probably driven by the park on many occasions and not had a clue who took care of it (us included) – or even heard of the East Concord Garden Club. Well, the club is celebrating its 80th year, which makes it even more shocking if you’ve never come across them at some point in that time frame.

“We want to try and get people interested in the projects we do in the community,” Glennon said.

Every spring they hold a plant sale, and in the fall they do a mums sale, all to raise money for their community service efforts and a recently established $500 scholarship for eligible Merrimack County high school seniors who are interested in pursuing an education in horticulture or a gardening-related field.

“It’s the first time we’ve done it and we want to continue it,” Glennon said.

They even do a tree lighting at the park after Thanksgiving. But it’s a small club with just 13 active members and a handful of contributing members. The plan, though, is to get more people interested in what the club is all about.

“All of the members are getting up there in age and we need to try and get new members involved in order for the club to continue,” Glennon said. “We really want to focus on keeping the club alive. It’s 80 years old, let’s keep it going.”

And what better way to do that then to have a party? That’s right, on June 28, from 2 to 4 p.m., at the Bridges House (21 Mountain Road), the club is hosting a celebration to mark 80 years of existence and – with any luck – attract a few new members.

They’re putting up a tent on the grounds, serving finger foods and drinks (no kegs though, we checked), and all are welcome to come.

“We want people to stop by and say hi,” Glennon said. “It’s kind of like a meet and greet. We just want to get our name out there.”

They’ll have info available for those interested in joining, and you’ll even get to chat with some of the members – if not all of them. Depends on how long you stick around.

“I love gardening and as much as it’s been about gardening, it’s the companionship and friendships that I remember,” Patten said.

To join, it’s a yearly membership fee of only $10, which really equates to one less trip to the ol’ watering hole after work. And there’s the expectation that you’ll help with some of the community service stuff, but if you join a garden club it’s safe to assume you like gardening. If you want to join, but don’t feel like getting your hands dirty, it’s $20 for a contributing membership.

“We want to get people involved in our projects so we have more members,” Glennon said. “We have lots of fun together.”

The club began way back in May 1935 at the home of the Rev. Timothy Paddon, pastor of the East Congregational Church. There were just eight charter members and began its community initiatives by beautifying the grounds of the church, holding a flower show, also at the church, and planting lilacs and daffodils on School House Hill. They also joined the N.H. Federation of Garden Clubs.

Over the years club members took on more beautification projects, like some green space off Exit 16, at the East Concord Community Center and the Merrimack County Nursing Home, along with sponsoring a Christmas door decoration contest.

“There’s been so many accomplishments over the years,” Patten said.

At the height of the club’s existence, membership rose to as many as 60 garden enthusiasts. But it’s gone through ebbs and flows.

“There’s been times where we didn’t think it would keep going,” Patten said.

The original club members did a lot with School House Hill, so last year they started a cleanup initiative on the space and brought in a specialist to prune the existing lilac bushes and got a grant from The Governor’s Lilac and Wildflower Commission to plant more.

“We’re trying to bring back School House Hill,” Glennon said. “We want to clean up and beautify.”

So if you’re interested in gardening and making a difference in the community, go to the celebration. There’s going to be food, and you might even be the one to help keep the club going, which would be a pretty cool thing to brag about.