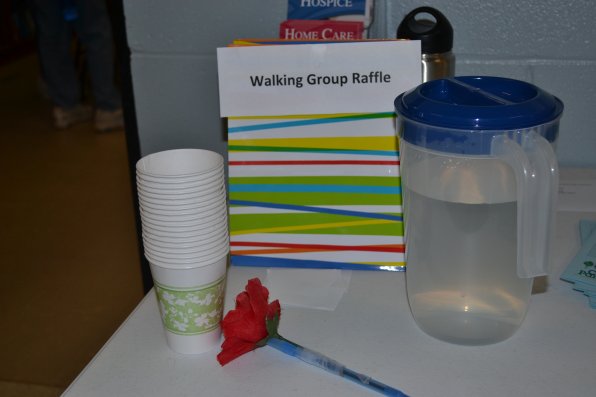 Some of the senior walking group amenities. 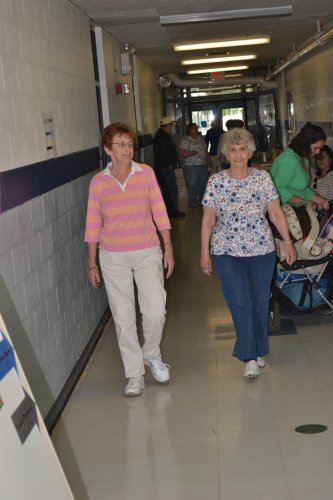 Ruth Forest and Janet Pethic are dedicated walking buddies and it gives them a chance to catch up on some of their televisions programs.

We all need exercise in some way, shape or form.

Isn’t that how we stay away from ending up a certain shape that’s reminiscent of a beach ball? But when you get a little further along in life, staying active is even more important – not only for your health, but the social side of things.

So when Becky Bukowski joined the Concord Parks and Recreation Department as the senior programming coordinator, she held a focus group. She wanted to know what seniors in the area were interested in. Of course everyone knows bingo is a huge favorite, but it was pretty clear they wanted more opportunities for exercise, too.

Although harsh winters and very warm and humid summers, shall we say, don’t mix all that well with exercise, especially for the older age group. So Bukowski thought, why not start up an inside walking group?

And that’s exactly what she did. Every Wednesday since January, beginning at 11 a.m., the halls of the Heights Community Center have been buzzing with conversations about General Hospital and Dancing With the Stars, while the squeak of sneakers can be heard echoing in the distance.

“The whole point is to encourage people to walk,” Bukowski said. “To get people moving.”

It’s a very informal thing, geared toward those over the age of 50. All you have to do is sign in and get to walking.

“I need the exercise,” said Sherrie Roberts, a mall walker as well who comes to the group because her husband is working. “And it’s something different to look at.”

And you don’t even really have to be over 50, because they don’t check ID’s or birth certificates and if they did, Bukowski wouldn’t turn you away.

“I had no idea what it was going to be like,” Bukowski said. “I really didn’t know how many people would come, but a lot of the people who come don’t have a way for physical activity.”

When you enter the former Dame School, take a right followed by another right when you come to a T. Head toward the exit and you’ll see a table. There will be a clipboard with a sign up sheet and cups for the adjacent pitcher of water – so if you’re thirsty, by all means help yourself – along with a nifty colored gift bag, but we’ll get to that later.

“It’s something to do,” said Janet Pethic.

“We had no place else to walk,” said her walking partner, Ruth Forest.

Once you’ve signed in, turn around and get to steppin.’ Most regular participants have found a partner to navigate the community center hallways with, hence the discussions about soap operas and other popular programming. But there’s also no reason why you can’t throw on a little music and walk by yourself.

Now, back to that colored bag. That’s where you can put your name in for a raffle prize every time you go 10,560 feet, which equates to 2 miles. Five laps around the community center is 1-mile, and while it’s not actually a big circle that would fall in the category of a traditional loop, going down each hallway is what we mean.

And once the warm weather hit, Bukowski used her car to mark 1-mile and 2-mile courses outside, so if you don’t want to be inside on a sunny day but still want to be part of the group, you have options.

“Ten laps around the community center might be a little monotonous,” Bukowski said.

The program will expand from the original Wednesday format to include Mondays and Fridays starting June 1.

“Not everybody is able to make it on Wednesdays, but have expressed interest,” Bukowski said.

The time frame for the walking group is about an hour, but whether you want make it a light day or keep roaming the halls all afternoon, you can pretty much do whatever you want. But just be aware that there might be another senior program, like a free lunch going on that you might want to go to instead.