We sure do like milestones, and McGowan Fine art is having one

Home » Articles » We sure do like milestones, and McGowan Fine art is having one 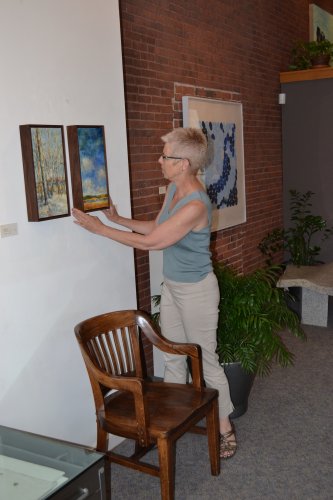 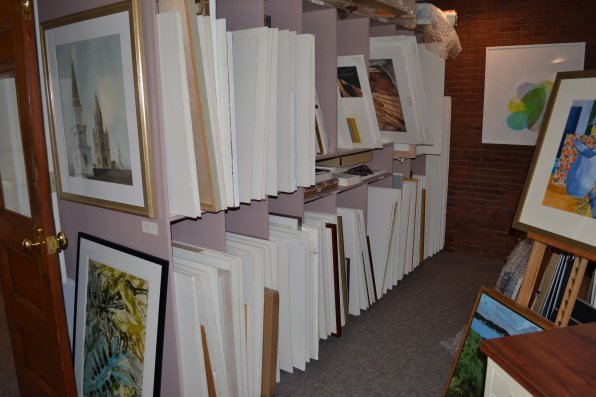 A portion of the inventory just waiting for a wall to hang on. Hint, hint. 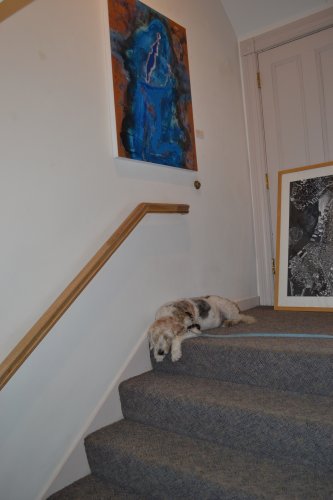 In case you’ve never been to McGowan Fine Art, that adorable pooch is Henry. He’s kind of a big deal, so when you don’t show him lots of attention that’s the kind of sad face you’ll see. Don’t worry, Henry; someone will come along and give you some much deserved love.

Walk into McGowan Fine Art and it’s hard not to feel comfortable.

The big windows in the front let in plenty of light for a warm and inviting feel, the staff is super friendly and the carpet makes it so you don’t have to tiptoe around in order to look at the collection of art that hangs on just about every wall of the gallery to avoid making a huge racket.

And there’s a method to how owner Sarah Chaffee strategically places things on the wall. It has to have a certain flow to it. To the untrained eye, you probably wouldn’t put a whole lot of thought into it unless you saw something out of place. Kind of like the way you never really notice a clean house, but always recognize a dirty one.

It’s just how Chaffee does things. Over her 18 years with McGowan, she’s put her own personal, yet subtle touch on things. Within three years of starting as gallery director Chaffee was asked by founder Mary McGowan to become a partner in the business.

“I unthinkingly said yes. It’s like getting married or pregnant, if you think about it too much who in their right mind would want to do it?” Chaffee said. “But I wanted it badly.”

A few years ago, when McGowan was set to retire, Chaffee took over the remaining part of the business. And now McGowan – the gallery, not the person – is celebrating 35 years in business. And what a journey it’s been.

“I’ve gone through the old folders and looked at some of the early shows,” Chaffee said. “The work has gotten so much better.”

And we can’t forget about Henry, Chaffee’s dog, who is the unofficial McGowan mascot and official door greeter.

“Everyone thinks I’m neurotic about my dog,” Chaffee said.

She wants people to ask questions so she can educate them about the art she chooses to show. She even said there’s no such thing as a dumb question – which is nice to know, because we’ve got a few that probably would fit into that category.

“People know they can come here and be engaged,” Chaffee said. “But the first step is getting them to look at it.”

Mary McGowan, whom Chaffee described as a crafty person, opened the doors in 1980 under the suggestion of her husband, Duncan. Even though Mary sold her stake in the business, she’s still involved with the gallery. Chaffee even called her the other day after nailing a corporate art presentation.

“She’s very involved and wants to see the gallery make it,” Chaffee said.

Only one of the original artists, Elizabeth Mayor, is still actively showing at the gallery, but there’s still plenty from the ’80s and ’90s, like Melissa Miller, Catherine Tuttle, Bert Yarborough and Gary Haven Smith, gracing the gallery walls. And since Chaffee decided to commemorate 35 years with a show, you can see a lot of the new stuff from the artists that make up McGowan’s growing list of 70 or so creators. But it wasn’t easy to put together.

“There’s a science to arranging a show like this,” Chaffee said. “There’s no consistency to this one. Not making it look like a hot mess on the wall was hard.”

Now you might be thinking how does she etch out time to show all of those artists’ work? Well, only 20 to 30 actually have shows, while the rest are put on other wall space around the gallery. There are also thousands of pieces in the inventory that aren’t in plain sight that Chaffee can choose from when looking to match that perfect piece with the perfect person.

It can take a while to make a sale, but Chaffee isn’t going anywhere and obviously after 35 years, neither is the gallery.

Chaffee has branched out over the years to include different styles of art. She wants to appeal to everyone, which sometimes means the funkier the better.

“Have I put my thumb print on it? Absolutely. When I came in I really wanted to step up my game,” Chaffee said.

And while Chaffee is by no means old or even what some may consider older, she likes to keep a younger staff around – which reminds her of the early relationship she had with McGowan.

“I hire younger people to keep me fresh,” Chaffee said. “I have to trust them the same way Mary trusted me.”