If tennis is your sport, then you should really go to this website

Home » Articles » If tennis is your sport, then you should really go to this website 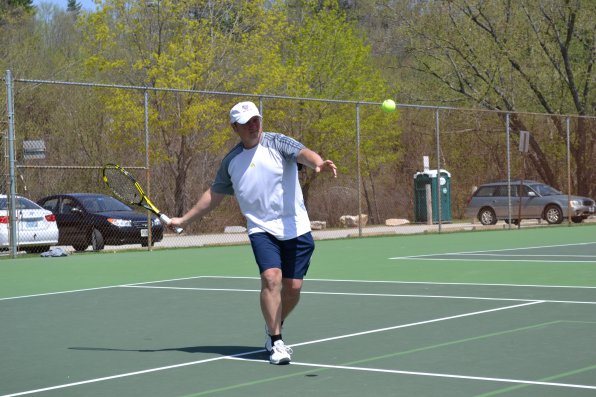 Alex Mezibov, the newest member of the Capital City Tennis Network and a Concord resident, shows great concentration with this forehand shot. Note: It was a pretty good shot. 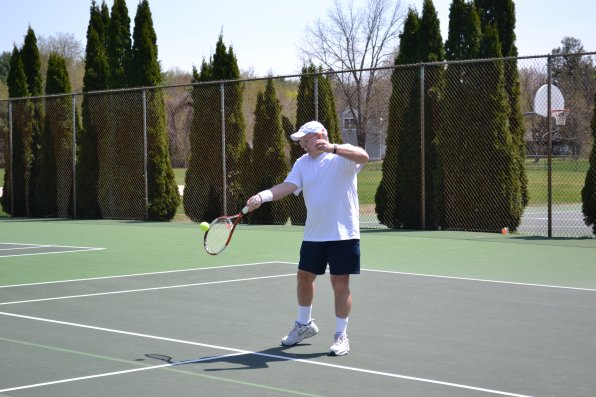 Lee Sturtevant, founder of the Capital City Tennis Network, takes a couple practice swings before an arranged match at Merrill Park. If you join the network, you could be on the other side of the net.

There are just some sports that make more sense with a partner, or better yet, require one. And tennis is definitely one of them.

Sure you could find one of those weird half courts with a wall and hit balls against it, but that really isn’t tennis. It doesn’t even have a net.

But at the same time, it can be a challenge to find someone who wants to meet up for a little back and forth volleying or a three game set at one of the many local courts, especially if you don’t belong to a tennis club or know people who enjoy the sport. First you have to be compatible in the skill department, because you don’t want to play against someone who can’t even get the ball over the net – like us. And agreeing on a good time for both players can be difficult with hectic lives and crazy work schedules these days.

And Lee Sturtevant recognized this. As a local tennis instructor, he’s taught many players who would benefit from some extra work, but just didn’t have the connections to play during their free time. So Sturtevant set out to change that.

“Tennis has been a big part of my life for 35 years and will continue to be,” Sturtevant said. “I would bump into adults who’d like to get back into tennis.”

In 2009, he connected with the owner of the Global Tennis Network. It’s a website where players can join to find courts, tournaments or partners around the world, and Sturtevant wanted to be a part of it. Although he was thinking less about becoming a member and more about creating his own online tennis community right here in the Concord area.

“It’s good for people who are new to the area and are looking to get back into the game,” said Alex Mezibov, who just joined a few weeks ago.

But it was more of just an idea in the beginning until Sturtevant made it official just over a year ago. So if you’ve never heard of it, let us be the first to introduce you to the Capital City Tennis Network. It’s a place to find tennis players of various skill levels for singles and doubles matches right here in the Concord area – to be played at one of the many local courts, like Merrill Park and Memorial Field, to name a few.

“I think there’s so many guys and women who are on the fringe of playing tennis,” Sturtevant said. “Once we started coming out of the economic crisis, I figured I’d start to rekindle the idea.”

It’s been a bit of a slowgoing process for Sturtevant and the network with only 18 current members, but the hope is to change all that – one new player at a time.

“The goal is to have 50 to 100 in the next couple years,” Sturtevant said. “I’d love to bring lots of players into the sport.”

And since all 18 are male, a few women joining would not only mean more matches, but the opportunity to play some mixed doubles.

“All it’s going to take is a few women to join,” Sturtevant said.

For a nominal fee of zero dollars, all you have to do is create a username (or just use your email) and come up with a clever password, like ILoveTheInsiders, and voila, you’re part of the network. From there, choose your skill level using a ranking system that goes from 1.5 to 5.0 and fill out your profile, which includes information like the racquet you use, what kind of player you are and a little personal info so people feel like they already know you a bit. And then just wait for a challenge or put a couple out there yourself.

“You don’t have to have a set time. You just work out a time on your own,” Mezibov said. “People don’t even have to know one another.”

You can connect with other players of a similar skill level for a recreational match or join a ladder and keep track of your wins and losses for what will certainly lead to bragging rights. Ladder matches are like mini-tournaments that help you improve your skills, and network members can request new singles and doubles ladders at anytime.

“What helped me over the years was to play guys who were better then me,” Sturtevant said. “There’s no restrictions. If two people want to just play each other, they can have their own rivalry.”

It can really be as serious or casual as you want to make it.

“It starts out as social tennis, but when the competitive bug bites, you can create some friendly rivalries,” Sturtevant said.

So if you’ve played tennis before, currently dominate your friends or want to try it out, check out the network. Your participation is all about what you want to get out of it.

“When you love a sport like this, it’s fun to share it with other people,” Sturtevant said. “And we’ve got some wonderful places to play around here.”