Parks and rec wants you to try something new, so you should do it

Home » Articles » Parks and rec wants you to try something new, so you should do it 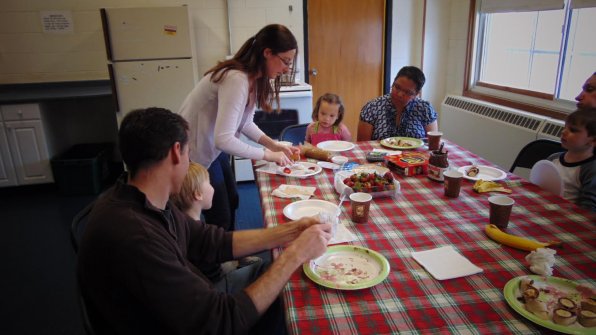 You make cool things like banana sushi in the L’il Chef’s Club and it’s got Nutella in it.

When you think of programs offered by a parks and recreation department, the more traditional ones like soccer, basketball and summer camps usually come to mind. The ones that get you outside and active.

But we guess you can say Concord Parks and Recreation isn’t your typical department. Yes, it offers those things we mentioned above, because those bring in a lot of participants, but it also has a variety of programs that for one, you may have never thought of, and two, probably wouldn’t expect to find in the pages of a parks and rec program guide.

Senior pickleball was a relative unknown a few years ago. What do you mean there’s a game that combines tennis, badminton and ping pong that can be played both inside and outside? Yep, that’s exactly what the game entails, with a few more specific rules of course, and now the department has more than 100 people on its pickleball email list.

“When we first started, people were probably like, what’s pickleball?” Bryant said. “But it’s fun to reach a different group of seniors that are just retiring and still want to be active.”

Apparently parks and rec is all about obscure hybrid sports because it offers something called fling golf, which is essentially the game of golf, but with the use of a lacrosse-type club to throw the ball rather than hit it. But you have to try it out and see what it’s really all about.

Now most of us probably associate dance classes at a dance academy with high mirrors and barres on the walls, but not when it comes to Frozen – the movie of course. There’s an entire week dedicated to ice castles, princesses and Olaf themed dance classes, along with arts and crafts for the Frozen enthusiasts, aged 3 to 5. Sorry, adults out there.

Typically, children’s cooking skills come down to mixing a bunch of random stuff together that you pretend to eat and eventually toss in the trash when they’re not looking. ‘Well at least they tried,’ is usually the thought that follows. But thanks to the L’il Chef’s Club, your children can learn some of the fine arts of cooking.

“We focus on getting the kids to eat healthy,” said program coordinator Kari Inglis.

It’s usually frowned upon when young kids use things like ovens, so we’re happy to report they don’t do that in this class. They make dishes like banana sushi (which includes absolutely no raw fish) and if there is any actual cooking involved, the parents or Inglis, the instructor, handles it.

“They just help me prepare,” Inglis said. “They get their fingers nice and dirty.”

And we can’t forget about the upcoming aqua zumba class.

“It’s already the hot craze of zumba and you’re adding the water part of it,” Inglis said.

Last but not least is the Safe Sitter program. When you finally want that big night out on the town without the kids, you want someone who is responsible to make sure they’re safe. Well, a graduate of this two-week, four-session course is definitely the kind of person you want getting your kids to bed and eating their vegetables.

There’s always something new being offered by parks and rec; you just have to pick up the latest brochure to find out what it is.

“We will honestly put anything in the brochure,” Bryant said.