Ever wonder what parks and rec really does? Well, here’s the answer

Home » Articles » Ever wonder what parks and rec really does? Well, here’s the answer 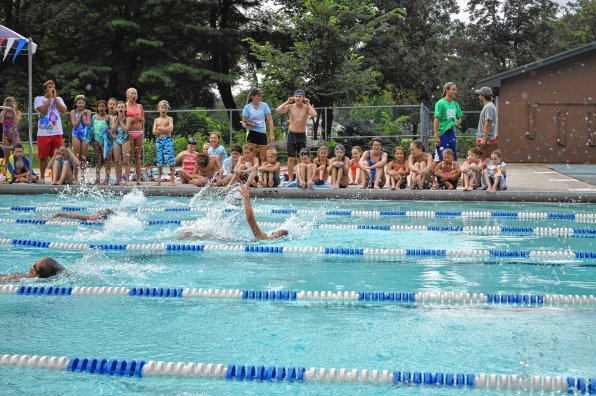 The city-wide swim meet put on by the parks and rec department drew a solid crowd of kiddos in August of 2013. 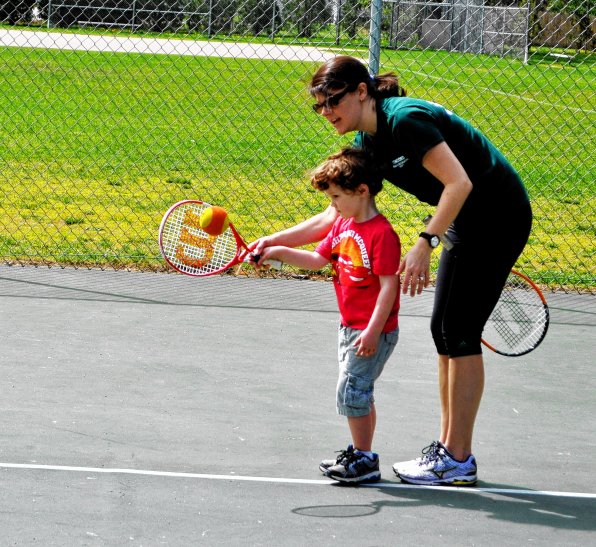 Recreation Supervisor Laura Bryant teaches Max Buckland the finer points of playing tennis with a giant orange ball during the summer of 2013.

Not every parks and recreation department is like the one in the recently ended show, Parks and Recreation.

It sure would be nice, especially for our story-writing purposes, but it just doesn’t make a whole lot of sense for a city to have a group of employees who don’t really put an emphasis on their jobs – nor really do them all that well.

So if you walk into the Concord Parks and Recreation Department offices in the Heights Community Center, you won’t find an anti-government director like Ron Swanson or a political know-it-all like Leslie Knope. We sure wish there was the lovable goofball that is Andy Dwyer, but unfortunately that’s a no as well.

What you will find is a group of people working to – in a nutshell – make it the best parks and rec department around. They want to provide the right amount of programs that will appeal to just about every age group. Sure, it sounds a little boring when compared to the show, but in real life that’s just what they do.

“There’s something for everyone, from 18 months all the way up,” said Recreation Supervisor Laura Bryant. “We have to keep up with the times if we’re going to keep people engaged and interested.”

Take a look at the latest brochure and you’ll see what we mean. It’s pages upon pages of cool stuff, and if you don’t see anything of interest, give them a call. They’re always looking for new ideas.

“We take a lot of suggestions from participants,” Bryant said. “Ideas come from all over the place.”

What you see in the spring program and summer camp guide might be all new to you, but for the staff it’s what you would call old news. Once those pages were filled and sent to the printer, in a way it starts the whole process over for the fall preparations. They’ve got to be one step ahead.

“We have a lot coming out,” Bryant said. “We want to offer as many different programs as we can so people can try something new.”

Right now is when things are really starting to ramp up in terms of registration for spring and summer activities, so if you haven’t done so you might want to get going on it. We don’t want to tell you what to do, but we’d hate to see you miss out.

The big programs like soccer and basketball are the mainstays, and the ones that see the most participation. We’re talking like 500 kids for the two sports, so you can only imagine what the overall numbers look like for the department.

There’s also a couple people in the front office and another couple dozen or so full-timers that help maintain the parks and cemetery. But depending on the time of year, the seasonal staff changes. During the summer, the department hires about 40 lifeguards to cover Concord’s seven pools, 11 for the three summer camps (more on that later) and about 25 to help with all the extra work to keep the parks and golf course looking good.

“There’s just a lot of moving pieces,” Bryant said. “During the summer we have a very big staff.”

Operations run seven days a week during the summer because of the pools, and six days the rest of the year.

“Summer is busy, but in a different way,” Bryant said. “There’s just a lot more happening every day.”

The biggest thing during the summer are the day camps. They go for eight weeks, from June 22 to Aug. 14, and the options are endless.

“You can sign up for the whole summer or just one week,” Bryant said.

The camps are broken down by age group. There’s Kids Kamp for grades 1-2, Rec Camp for grades 3-5 and Adventure Camp, geared toward kids in grades 6-8. In Adventure Camp, participants go on out-of-town trips four out of the five days each week. Each week has a different theme, and there’s lots of fun to be had.

In addition to your traditional summer camps, there are also camps for cooking, farming, archery, theater, Legos and much more.

They will have a men’s basketball league starting in June, once the Green Street gym renovations are done. The little kids’ flag football league, which just started Sunday and filled up quick, will be offered again in the fall, and coming soon is toddler yoga.

“Apparently flag football is something people have been wanting,” Bryant said. “It looks like it’s going to be a success.”

A senior walking group meets Wednesday mornings to walk the halls of the Heights Community Center, and the ever popular bingo takes place Mondays. There’s really way too much stuff to list here, so we suggest checking out the brochure or the website. It will be a lot easier for both of us.

“Sometimes it’s like, what’s hot? What do people want to try?” Bryant said. “We try to match the trends of society, what people are into.”

But there are also a lot of things you probably don’t know the recreation department handles, besides the aforementioned golf course and cemetery work, which will soon include putting out all those little flags for Memorial Day. They take care of cutting the grass and trimming the trees to make the parks not only look pretty, but also be functional for your impromptu Wiffle ball games. They line and repair the baseball and football fields, and if there’s a ripped tennis net, parks and rec will fix that, too. They do the scheduling for the parks and the five community centers and help with the Audi. They even spray down the ponds in the winter for a nice smooth ice surface, although nobody wants to think about that right now.

With so many teams and leagues, there are T-shirts to order, equipment to maintain and volunteers to find for coaching positions. And don’t get us started on all the scheduling that has to get done, for both games and referees.

So basically, they do a lot of stuff for you to enjoy. Now go out and sign up for something – preferably the cooking camp so you can make us some delicious food.