The Capital Quilters Guild wants you to know about quilting 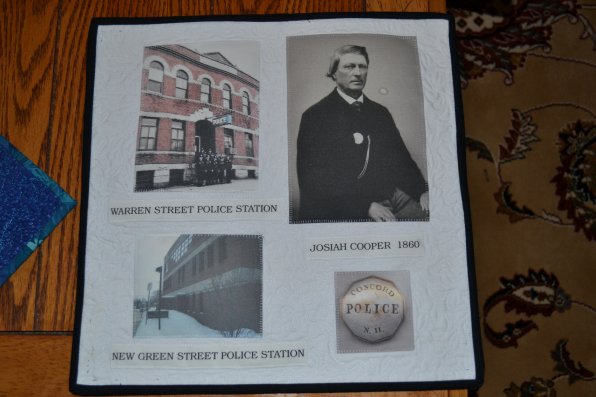 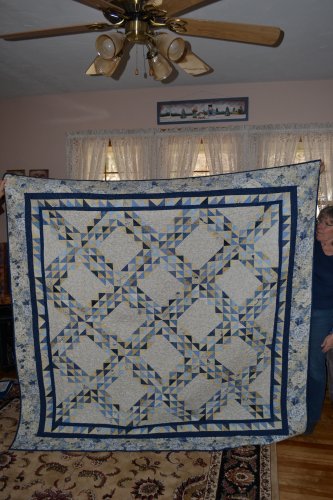 This is the quilt awarded to the first prize winner at this weekend’s biannual quilt show. And you should see what it looks like in color.

If you’re looking to pick up a new hobby, head over to Havenwood Retirement Community on the second Friday evening of the month.

Well, don’t go there this week, but more often than not, if it’s the second Friday, you’ll find the Capital Quilters Guild doing its thing. And the only reason they won’t be there this month is because members will be a little busy setting up for their biannual show (see that grey box on the next page for more).

But just about any other of the 11 months of the year, some or all of the 90-member guild will be there talking about all things quilting. The Friday night session usually begins with a 30-minute business meeting that includes talk about upcoming programs and any decisions the 12-member board of directors. Then the real fun begins when a guest speaker, some who have traveled from far away lands like California and New Mexico, or members of the guild do a little show and tell with the group about something new and exciting in the world of quilting.

We know it may be hard to believe that new and exciting things are happening when it comes to quilting, but they are, and the Capital Quilters Guild wants you to know about it. On the second Saturday of the month, the guild hosts a workshop for the first 15 to 20 people to sign up, and that’s where you actually get to do some quilting.

Now when we first heard about the guild, we expected a group of quilting enthusiasts sitting around a room with their fabric, thread and sewing machines just working on another comfy piece for their kids or grandkids. You know, a club for those who enjoy making quilts. And yes, guild members do enjoy quilting very much, but there’s more to it than just sewing. There’s the educational and informational part we already talked about, but what really warms the heart of the members is the community service aspect.

They make Christmas stockings every year for those in need. They start each July with a sit-and-sew and then work on them the rest of the year before donating the filled stocking right before the holiday. For the last 10 years, members have sewed place mats for Meals on Wheels, which are then given to the organization’s clients so they have a colorful and handmade creation to eat on.

“We’re big on place mats,” Johnson said. “We’ve made thousands of them.”

Recently they began making pillow cases for Concord Hospital’s pediatric unit and plan on donating a large batch twice a year. But they are, after all, a quilters guild, so it’s only right that some of the quilts they make also get distributed to needy members of the community. So when members finish a quilt they’d like to donate, it gets put in a pile at someone’s home. When that pile gets quite large, the quilts are donated to organizations like the Friends Program, Merrimack County Nursing Home, the Salvation Army and McKenna House.

“We do them on our own time and donate the to the guild,” Johnson said. “It makes us feel good being able to give back to the community.”

There’s also these spin off groups created by members. They meet weekly or monthly, usually rotating between members’ homes, and that’s where a lot of the actually quilting happens – outside of the hours they spend doing it on their own.

“We solve world problems,” said founding mother Beverley MacGown said of the spin off groups. “It’s sort of like a support group. We’re like sisters.”

After all, MacGown does consider herself a full-time quilter and has more than 500 quilts to prove it.

“If I see a new technique I want to try it,” MacGown said. “Some people collect salt shakers; I collect quilts.”

The guild will celebrate it’s 20th year this September and is showing no signs of slowing down. Although they could use a few men in the mix, since it’s currently made up of all women.

The guild was originally created because there were many women traveling to places like Manchester and Laconia to be part of a guild. So a bunch of them got together, put an ad in the Monitor inviting interested parties to join them for a meeting and about 150 people showed up the first night.

“I never even got to see the meeting,” MacGown said. “I was just signing people in all night.”

Over the years, the numbers have fluctuated, but things are going well. They’ve found a nice home at Havenwood after meeting at places like Pleasant View and the hospital. They even have a three-day retreat coming up in May.

“It’s just a way to get away and do more quilting,” Johnson said.

And if all of this sounds like something you want to be a part of then we suggest joining. You can do so at the next meeting –  which will be held at Havenwood on May 8 – fill out the form on the website, capitalquiltersguild.com, or sign up at the biannual quilt show this weekend. It’s quite a deal when you consider all you get – the monthly meeting invite, the guest speakers and monthly newsletters – for just $20 per year. You can even attend two meeting for free to see if you like it.

“We just want anyone who enjoys quilts,” MacGown said. “They don’t even have to be a quilter.”

So our question to you, is what are you waiting for?