Believe it or not, Tim can actually use a sewing machine – kind of

Home » Articles » Believe it or not, Tim can actually use a sewing machine – kind of 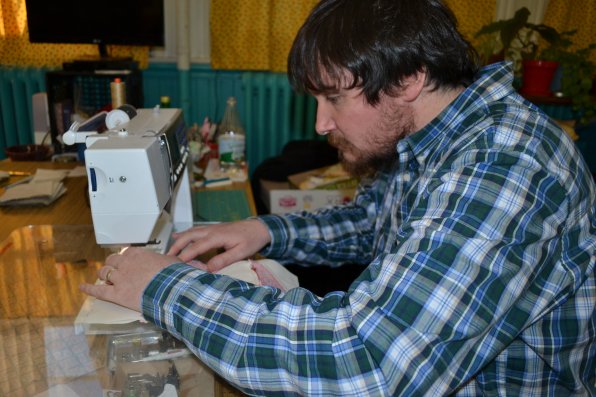 It didn’t take long for Tim to master the use of a sewing machine or at least pretend to know what he was doing. 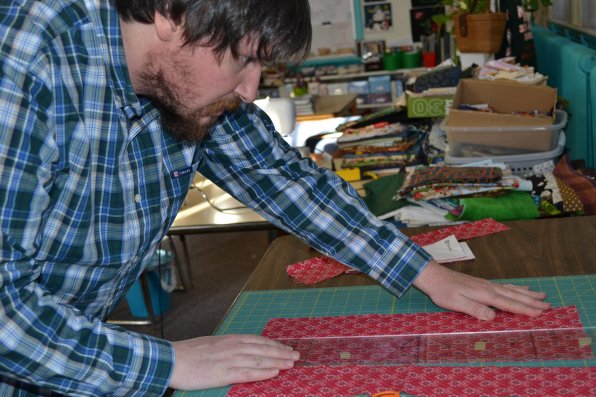 Rule of thumb when it comes to cutting is one, don’t cut your thumb off, and two, measure twice and cut once. Just look at that focus. 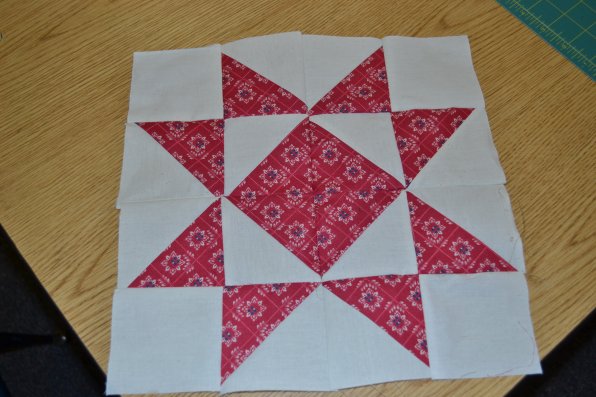 The finished product. And all of you out there probably thought Tim couldn’t sew. Well here’s proof of it. 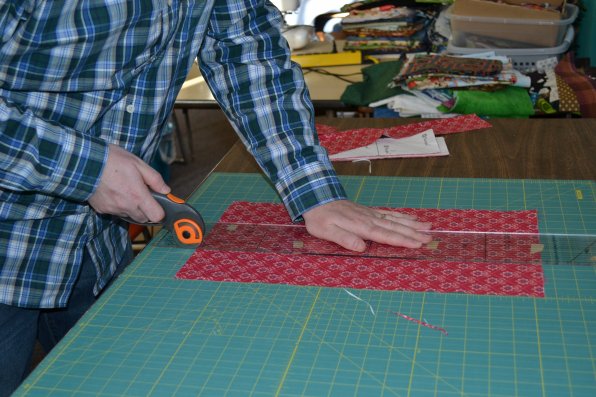 While the rotary cutter is sharp, Tim didn’t accidentally cut off his head – it’s just not in the photo. Fun fact alert: You can’t bring a rotary cutter on an airplane. 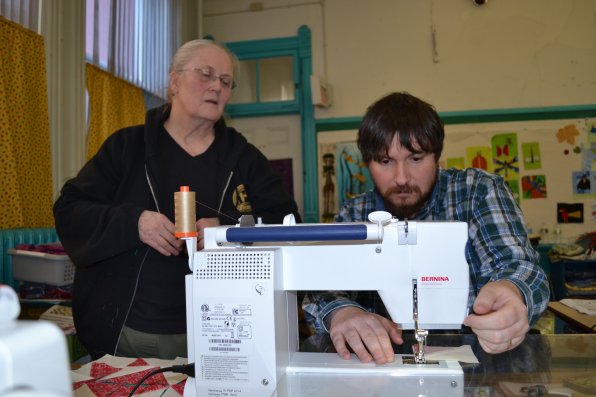 Under the watchful eye of sewing extraordinaire Deb Green, Tim carefully cuts the thread after another successful set of stitches.

When I was in middle school, I sewed this cute little stuffed animal dog for my mom.

From what I remember, it actually looked like a dog. But that’s about it when discussing my sewing experience, and that was all done by hand. Yet when the idea for a quilting issue came about, I soon realized my sewing abilities would be tested. That’s because Deb Green, who opened Sew Sisters Studio in the Concord Community Arts Center, wanted to teach me how to quilt.

As I conducted my interviews for other stories, I learned that my by-hand sewing skills wouldn’t be needed, because a lot of the stuff is done by using a trusty sewing machine. This was going to be a challenge, but we love challenges, even if we fail and look completely overmatched. It always makes for a good story.

Luckily, Green had likely seen some of my missteps prior since she’s an avid reader of the Insider, and she decided to do a little work ahead of time to make things faster. And, it turns out, easier. She still had me do some of the cutting with the rotary cutter, which I learned is not allowed on an airplane, and measuring, but that was more for the knowledge and experience.

My direction on this night was to make a square. Each square is made up of 16 smaller squares arranged in a pattern of your choice. Since Green had so many examples on the walls, I had plenty to work with.

“I like the experimenting part,” Green said. “You’re going to have things that work well and others that will be failures.”

Once I settled on my pattern, I arranged the smaller squares to match and it was time to put it all together, hopefully without hurting myself. I was using an electric sewing machine for the first time, after all.

And it’s a good thing that Green was watching my every move, because I would have had no idea where to start. But now I’m such a pro that I can tell y’all how to do it. What you want to do first is connect two squares together with the seam going up to make eight pairs. For example, the top left square is attached to the one to its right. The other two squares on the top row are also connected.

The pairs are then sewn together with the pair above to make four quarters. The process goes on to connect the two quarters on the left and then the right before the final seam up the middle for the finished square.

I can’t forget to mention the pressing (by using a hot iron) after each sew. You want the creases to be nice and flat to make sure the fabric lines up for the next seam.

There were a few stitches that needed to be taken out and redone, but that can happen to any quilter.
“You learn something from every mistake,” Green said.

And what did Green think of my finished product you ask?

What I learned after finishing my lesson is that it would take 42 of those squares to make a queen size quilt. So let’s just say that Sophie can use what I made for one of her dolls one day, because the chances of me finding the time to finish a quilt would be what you call slim to none.

And FYI, Sew Sisters Studio is a place where you can go to just sew with others. It’s $10 per day or $50 a month. Check out its Facebook page, facebook.com/pages/Sew-Sisters-Studio for more.