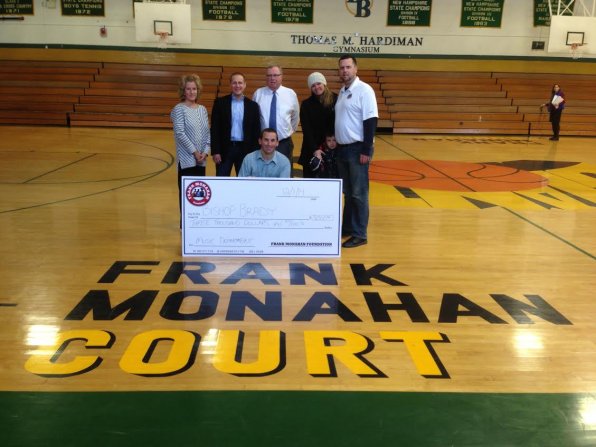 That’s because he’s never usually asked to do much of anything. But last Monday’s school-wide meeting took a turn Lane never expected. Marshall Crane, a 1998 graduate of Brady, was there speaking about the Frank Monahan Foundation when all of a sudden he asked Lane to join him on the floor named for the late Bishop Brady basketball coach.

So Lane walked in front of the school and instead of being asked to give an impromptu speech about the state of the music program or reciting the alphabet backwards, he was handed one of those giant checks, like one of those cool game show oversized checks, for $3,000 to help fund new keyboards for his foundations of music class.

And Lane wasn’t the only one to get a friendly donation from the Frank Monahan Foundation last week. Because after his trip to Bishop Brady, Crane and a few other Monahan Foundation board members made the one-mile trip to Concord High, where they gave Jim Foley, director of bands at the school, a check for the same amount. It also happened to be one of those big checks that just seem to make giving money away that much more fun. By the way, does anyone know where you can pick one of those up? And how many stamps it would take to mail it out? Just curious, because we have a parking ticket to take care of.

“This is very rare when someone calls with this kind of donation,” Foley said.

Through the golf tournament alone, the foundation has raised about $56,000. And Monday was a chance to give some of that money back to the community that Monahan called home.

“We were looking to give back to both Brady and Concord in a way that was a little different,” Crane said. “And we want to continue to build on this relationship with the schools.”

A lot of the previous donations have been to help athletic endeavors with the Boys & Girls club and the Concord Parks and Recreation Department, but when Crane got an alumni email from Bishop Brady seeking used instruments, he got an idea.

“There was obviously a need,” Crane said. “Music and art departments are usually the least funded.”

He contacted Bishop Brady, where Monahan’s daughter, Kelly, just so happens to work, and told principal Andrea Elliot of his idea. Everyone thought it was a good one – but nobody decided to let Lane in on the good news. Guess that’s what you do when it’s a surprise. And was Lane ever surprised.

“I just wish I had a camera,” Crane said. “Seeing his face was pretty priceless.”

The donation will fund 10 new keyboards, along with the stands, benches and headphones to go with them. Lane’s foundations of music class began this year with seven students, but they only had four keyboards and an old piano. The expectation is for the class size to grow, and the addition of new keyboards should help make it a lot easier for Lane.

“It’s filling a need that’s been there for a while,” Lane said.

For Foley, the unexpected donation will buy four new snare drums for the marching band, complete with cases, carriers and harnesses. Foley guessed the drums being replaced were at least 20 years old and in desperate need of an upgrade.

“It would have taken us a long time to raise that money,” Foley said. “This is going to be big for our program.”

For Crane, this is just another way to spread the good name of Frank Monahan and the foundation set up in his honor.

“When people think of our foundation, obviously coach was a coach, so people immediately think of sports, but doing something like this will open other doors and create another avenue to give,” Crane said. “We wanted to do something that would be within our budget, but at the same time be good enough to make a difference.”