Kris Boule gets into character as Lillian Scum in Stone Soup 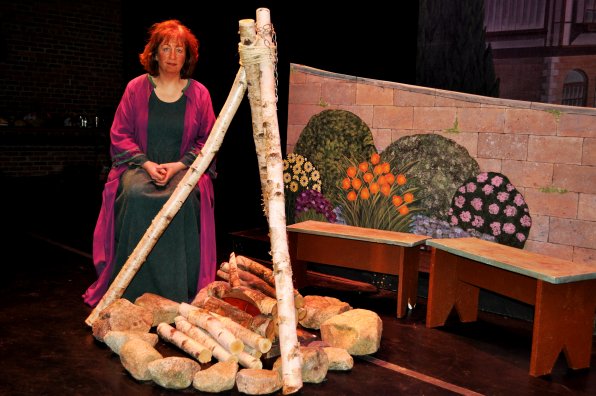 How long have you been acting/performing?

Really just the last three years with the Junior Service League. Before that, I did a little bit in high school and college. But with the League, you get an opportunity to do things like this. Because we put on a show every spring, it gives everyone an opportunity to try their hand at community theater. You get to step out of your comfort zone and get a little crazy.

What made you want to get involved in this particular performance?

There’s a lot of camaraderie with the cast. And to see the kids’ reaction, to hear their reaction, that’s really rewarding and what makes you want to keep doing it year after year. This is my third year with the league, and I really wish I had done it my first year.

Was Stone Soup chosen because it was such a good metaphor for what the Junior Service League does?

We try to have a message for the kids in every show, and this one happened to really go along with our mission. We’re asking people to bring along a can of soup to be donated when they come to the show. There’s also knights that are girls playing boy characters, to show anyone can do anything. This year it really does go with our mission and the message that we’d want to spread to kids.

Who are you playing in Stone Soup?

Lillian Scum. She’s a scheming, underhanded, somewhat evil person who gets her son to go along with the evil plot she’s concocted. One of her sons, anyway – her other son is a good guy.

If you were going to make a real life stone soup, what ingredients would you bring?
Does it have to be a physical item? Because I’d bring compassion. I feel like there’s not enough of that. It seems like with the hecticness of life. we’re not always as compassionate as we could be; myself, too. I sometimes get so hung up on daily routines. Somehow we have to just step back and think about others.

And if I was going to bring a food ingredient, it would be chocolate. Because everyone loves chocolate.

What is your favorite non-stone soup?
Pumpkin bisque.

What stone makes the best soup?
The kind of stone you skim across a river and it makes ripples, like a nice, flat stone. Or maybe granite?

What is a dream role for you?

I would love to play Donna, the mother in Mama Mia. I just like the music, and she’s kind of a funny role.

Who would play you in the movie about your life? What what would it be called?

Maybe Reese Witherspoon, because I’ve always liked her. And I think it would have to be called The Three-Ring Circus.

What do you do when you are not acting?
I am the communications director for the Department of Health and Human Services.

Pottery. I’ve been doing it for about 13 or 14 years. I usually go to a place in New London where I can throw all my own stuff and glaze them.

I have to watch almost everything on the DVR, but I love watching Flashpoint and Without a Trace.