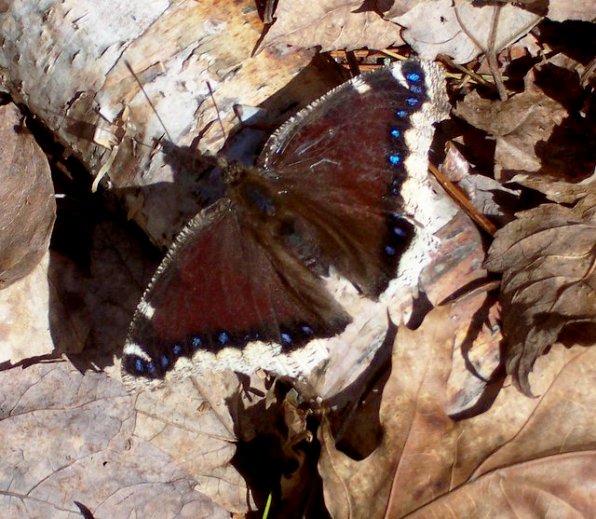 A mourning cloak butterfly fresh out of hibernation. 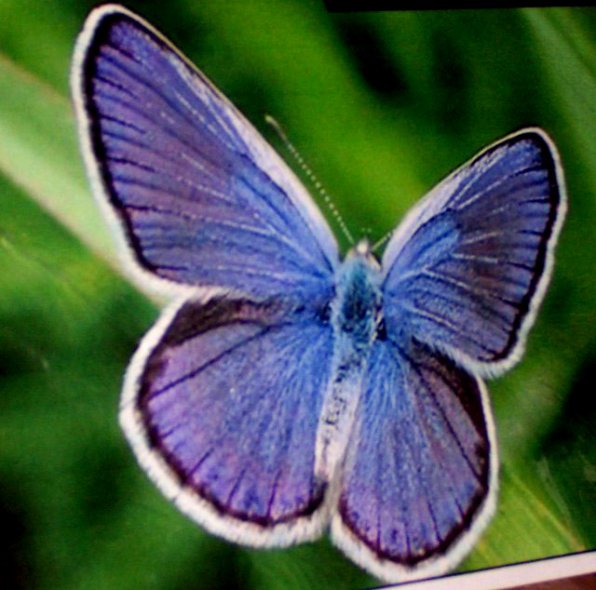 The mourning cloak butterfly and the Karner blue butterfly have very different life stories and represent the wide variety of species in the family of butterflies.

The mourning cloak butterfly is one of the very first butterflies to appear in the spring, even when patches of snow are still on the ground. Its secret? It spends the winter as an adult hibernating under the loose bark of old trees or other sheltered spots. As soon as the spring sun warms up his hiding place, the mourning cloak butterfly is out and about, dining on the sap of trees that begins to flow at the same time.

Often seen in wooded areas, the mourning cloak butterfly is so named because its purple-brown color resembles the traditional clothes a person in mourning sometimes wears. With a span of three inches, the wings have a pale cream border and some small distinguishing blue dots. The female will lay eggs from which velvety black caterpillars will hatch and feed on a variety of trees such as willow, elm and oak.

After the caterpillar forms a pupa in midsummer, the butterfly emerges to begin its journey of dancing through the trees and prepares to bed down for the winter. Found throughout the United States, the adult will live for 10 months which is long for a butterfly. Since the mourning cloak butterflies have a healthy population, they should have no reason to mourn.

The Karner blue butterfly, however, has almost disappeared from New Hampshire even though it is our state's butterfly. As an adult it will live for about one or two weeks. This small blue butterfly with a one-inch wingspan is named after the town in New York where it was first identified more than a century ago.

Each year the Karner blue butterfly has two broods, one in the spring and the other in the summer. The adults in the last brood of the summer will find a wild blue lupine plant on which to lay their eggs, which will remain dormant under the winter's snow. Green caterpillars will hatch from the eggs the following spring and begin feeding on the lupine plants for three to four weeks. The caterpillars will then form a pupa, in which state it will remain for up to eleven days. From this pupa, the adult butterfly will emerge to be part of the spring brood and the cycle continues.

Since the caterpillars of the Karner blue butterflies will feed only on wild blue lupine plants, and because much of the habitat where the lupine plants grow has been destroyed, the Karner blue butterflies have been placed on the federal endangered species list. Lindsay Webb and Marilyn Wyzga from the New Hampshire Fish and Game Department have been spearheading efforts to create the right environment in which wild blue lupines can grow.

One way to do this is by controlled burning of the pine barren area near the Concord Airport, which is the one place in all New England where the Karner butterflies have been found. Also, some Concord students have been growing wild blue lupines in their classrooms and will be transplanting them later this spring in the open spaces created by the fires.

Look for part two of this story in next week's Insider.