Quarries: the core of Concord’s storied past

Home » Articles » Quarries: the core of Concord’s storied past 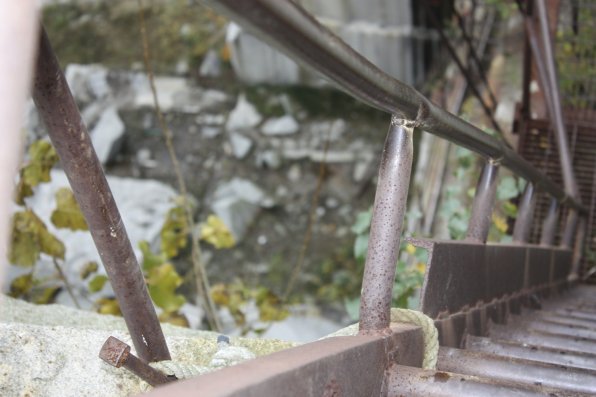 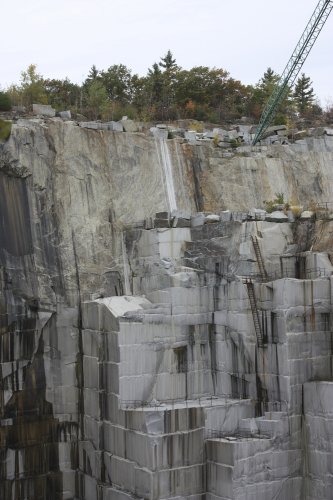 A view of the Swenson Granite quarry on Rattlesnake Hill. 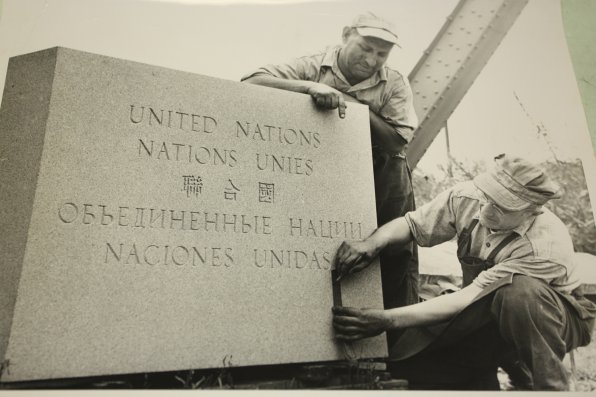 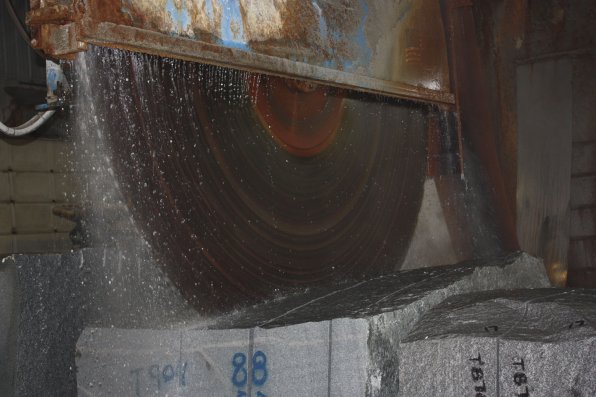 A giant granite saw uses water to prevent the blade from binding as it cuts through rock. 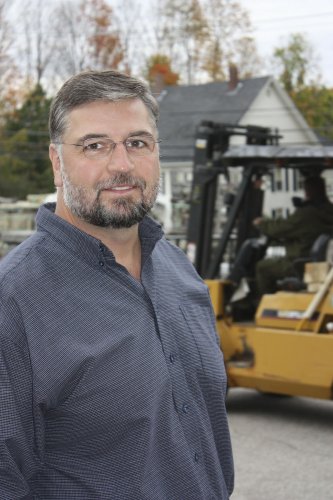 Although history is not often written in stone, the words that mark it are. In fact, the stone monuments that reflect major events, like the new Pentagon steps that Swenson Granite Co. made to replace those lost in 9/11, may even outlast the Pentagon itself.

“You can't help but be emotional about that,” says Scott Herrick, 49, of finding and preparing the pink granite that was used to restore the building after the terrorist attacks. “It gives you a chance to be part of the rebuilding process.”

Herrick, executive vice president at Swenson Granite, says he's grateful to be part of a family business that contributes so meaningfully. If the granite is old, he says, it might be from more than a dozen businesses quarrying in the 19th century. But if it's modern and local, it's Swenson.

“It's very connected, very stable to be part of this kind of established business. You feel like part of the family.”

Up on the quarrying hill, 450 feet above, quarry foreman Ken Littlefield, who has worked at Swenson for 20 years, echoes the sentiment. The best thing about the job is the workers and the company's owners. That's that.

Back down in the office, Herrick jokes about the work itself: “It's a hands-on business; we're hands-on people.”

Hands are indeed in play every day from just after dawn until late afternoon when weather permits. Pulling out tons of raw material from the ground, to be transformed, into usable building materials later is a process worthy of marking history.

It's labor intensive work itself and etches itself deep into the men's work ethic. Hands are worn with physical work; and while computers and new machines upgrade the process from more primitive tools like dynamite and labor-intensive drills, men are needed to hook up the chains and hoist the granite up nearly 200 feet from the quarry floor to the embankment that Lance Kilmister has been calling his professional home for nearly 30 years.

Perhaps the historic aspect of this work is what makes the workers so easily at home in their bodies; with ease and confidence, with true strength, they are a working tribute to the physical work that humans have always undertaken despite the technological age.

“The most rewarding thing is the durability. It is going to outlast everything,” says Kevin Swenson, who began working in the quarries when he was a young man. After earning a masters degree at the University of Hawaii, where he studied geology, he found himself drawn back to the family business where his great grandfather made a national name in the granite industry. New Hampshire is known as the granite state because it is as common as apple pie in autumn around these parts.

“Everything changes and wears out, but stone just lasts,” Swenson said.

Changing with the Era: Even Granite Evolves

Despite the durability of the company-which mirrors the stability of the family-owned and operated business-the times change. Gone are the days when the Swenson granite workers all wore old-fashioned hats; now, they wear hard hats, and monument building is less in vogue. Now it's curb stone that fills our cities and towns, the rock and pillar of sidewalks across New England.

“Maybe I'll go down to St. Croix,” Swenson jokes. Apparently, Swenson granite lines streets there as well. Instead of streets of gold, Swenson might find himself dreaming of streets of granite slabs and cobblestone if he's not careful. One lives, eats, and breathes granite when one's born into a family whose livelihood depends on this rock of ages. His first memories are the quarry are from when he was a small boy. “I would come up here while little and see huge [pieces of stone].”

“One of the keys to notice, of course, is that all the buildings in this area around Statehouse Square are built of local granite such as the State House. “The library building is a beautiful example of granite and now in its 100th year.” The Federal Building, now the Statehouse Annex, also sports the local treasure. “Unfortunately, the town hall is made of brick,” Wallner says with levity. He noted, as well, that Concord shows its influence quietly in Boston where the Museum of Fine Art and other buildings showcase the mineral. Local Concord granite from Swenson was also used to build the Library of Congress in Washington, D.C. The Tomb of the Unknown Soldier also has the mark of Swenson's gift of the earth.

“I just think (granite's) a local resource that has helped to make Concord what it is; the granite quarries employed a lot of people and brought people of different ethnic groups into town,” Wallner said. “It has had an important impact on what makes Concord what it is.”

Herrick walks on an overcast late October day among all the creations that Swenson crafts and sells at its retail store at 369 North State Street. Those who wish to buy materials for homes or landscapes are always welcome-whether they be a large company, the government, or just one inpidual coming in to look for a lamppost or a birdbath hewn from the traditional light gray rock that one sees all over this state capital.

“It happens every day,” Herrick said about one lone person coming in for one lone lamppost.

Simon and Garfunkel must have been singing about granite-or at least the way that the structures we build from such indestructible natural materials like granite truly outlast even the lives of men. “Hello lamp-post, What'cha knowin'? Ain't cha got no rhymes for me?”

“Leave no stone unturned,” the cliche goes. Swenson takes that to heart and reminds us that those cliches about stones-or removing them from the ground-come from somewhere. Everyone from New Hampshire can tell you a story about granite-or tell you how it improves their lives from adorning their stone walls to building their hearth stones to filling their driveways.

The famous landmark, the Old Man in the Mountain, was made, after all, of Conway Granite, which was salmon colored and made of the usual combinations of feldspar, mica, and quartz. Daniel Webster, the great defender of the Constitution, who was born not far from Swenson's modern-day quarrying site, said of the permanence of the inspiration for the state's moniker, The Granite State, “Men hang out their signs indicative of their respective trades; shoe makers hang out a gigantic shoe; jewelers a monster watch, and the dentist hangs out a gold tooth, but up in the mountains of New Hampshire, God has hung out a sign to show that there he makes men.”

If you visit Swenson Granite, you can't take a tour of the quarry because it's too dangerous. With men pulling 15-ton slabs routinely out of a 200-foot deep hole in the ground, it just gets iffy. But you can still visit one of the eight retail stores that Swenson has in New England by driving up North State Street. Lamp-posts, benches, custom orders, fireplace materials, landscaping stones, cobblestones: They have it all. You can even have your own personal granite park bench engraved.

Other Swenson stores, containing similar items, are dotted around New England. Swenson not only showcases the light gray granite that gives Concord granite its identity, but it also has selections from its quarries in Vermont and Quebec including the Rock of Ages in Barre, which Swenson also owns. If that's not enough, you can find black granite from South Africa or Caledonia, which comes from Canada, and what seems like a world in between.

Concord Granite – from the 150-acre Swenson-owned quarry that is cut down 200 feet into the earth – contains mica, quartz, and feldspar, and that gives it its traditional look. But look closely at the custom-made items, conceptualized, crafted, polished, and carved at the Swenson store – such as the stone-table checker table or the rustic bird bath carved into the stone, and you'll see the flecks of the stars of the mineral world: quartz and mica, black and white, shimmering for what may be forever – or at least a couple hundred million years. On websites about minerals, folks agree that granite will last indefinitely.

At least something does.