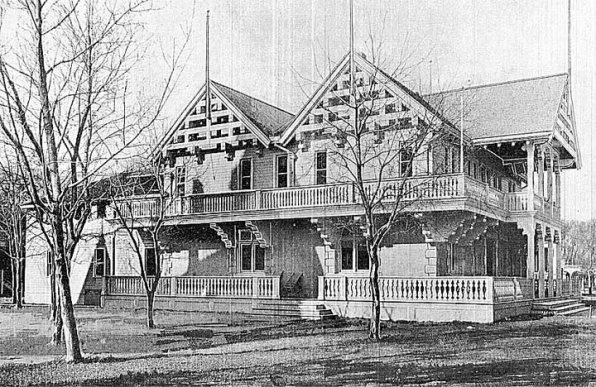 We get story ideas in all kinds of ways – by phone, e-mail, snail mail and personal visits. But an anonymous message with a password? That's new.

The call came in a few weeks ago. Mr. Anonymous said he heard from reliable sources that the building at the corner of Pleasant and Main, which currently houses Pitchfork Records, among other things, was originally built for the Chicago World's Fair in 1893. A local insurance man by the name of Jackman bought it in Chicago and had it transported and rebuilt in Concord. Anonymous left a password in case he called again so we would know it was him. Totally awesome, by the way.

Intrigued by this mystery, we contacted our new friend at the New Hampshire State Library, Donna Gilbreth. She's the reference and information services supervisor. After a bit of digging, she came back with the following:

Before we address this further, let's get some background information. The World's Columbian Exposition, also known as the Chicago World's Fair, was held in 1883 to celebrate the 400th anniversary of Christopher Columbus's arrival in the New World. More than 200 buildings were erected for the fair, including buildings commemorating states.

This may come as a surprise to some of you, but evidently New Hampshire was known as the “Switzerland of America” back in the day, and the local fair commission settled on a Swiss cottage design. The official fair directory describes the design as having walls made of New Hampshire granite and stained Georgia pine, two stories surrounded by a wide piazza and a glass skylight roof. Construction cost about $10,000.

The first floor housed a reception hall and parlors for men and women. The second floor had meeting rooms and portraits of great New Hampshire figures like Franklin Pierce and Daniel Webster. There were also several artifacts belonging to Webster, including a glass decanter and tumblers from his Franklin farmhouse. So as not to give anyone the wrong impression, a card tied to the decanter read, “Webster advised the merchants of Boston to abstain from strong drink.”

Then-governor John B. Smith, his staff and “75 prominent citizens” traveled to Chicago to dedicate the building in June 1883, according to the Concord Evening Monitor. Was insurance man Hugh Jackson part of the governor's entourage? Sadly, Hugh did not leave us with a diary of his life, so we're stuck speculating on this point.

Disaster struck in July 1884 when fire destroyed most of the main buildings of the fair. The Concord Evening Monitor reported that the fire was believed to be of a criminal nature.

It's pretty clear that Lyman Jackman, our insurance man, did not purchase the Swiss alps tribute and move it to Main Street, but it is still possible another building struck his fancy. However, we found no documentation of a world's fair building moving to New Hampshire. Other than the buildings still standing in Chicago, existing fair structures include the Norway Pavilion, which was moved to a museum in Blue Mounds, Wis.; the Maine state building, moved to Poland Spring, Maine; and the Dutch house, moved to Brookline, Mass. The rest were destroyed in the fire or dismantled by the Columbian Exposition Salvage Company.

Jackman may simply have been inspired by the architecture at the fair, if indeed he had a hand in the construction of the Acquilla building.

As always, readers, we invite you to share your knowledge on the matter. E-mail news@theconcordinsider.com to add to the debate.

Special thanks to Donna for providing the Concord Evening Monitor clippings and fair directories!

If you'd like to learn more about the World's Fair and see some cool pictures, check out the following links: