Where turkeys got their name

Home » Articles » Where turkeys got their name 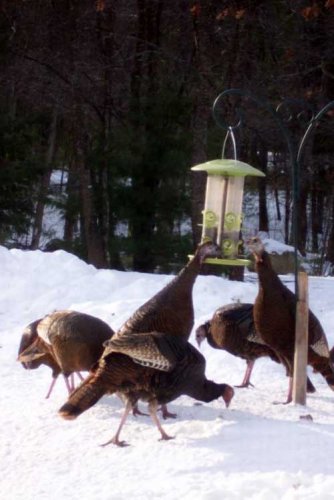 Why is the turkey, a bird native to America, named after another country? Also, what is the current status of wild turkeys in New Hampshire?

How the turkey got its name is shrouded in mystery, but the most probable scenario is an intriguing story. When Spaniards came to the New World, they discovered the turkey in Mexico and took several back to Europe. The country of Turkey was a central trading route and when some of the strange peacock-looking birds were shipped to England by way of Turkey, the English called them turkeys. The first English settlers in North America saw turkeys in their new land and immediately identified them as the same birds. The name stuck.

Prior to the arrival of the Europeans, North America may have had as many as 10 million wild turkeys, a favorite food of the Native Americans, who also used the feathers in ceremonial clothing. But by the early 1930s, turkeys were hunted almost to extinction and totally disappeared from New Hampshire.

In 1969-70 the New Hampshire Fish and Game Department began transplanting wild turkeys back into the state, but the effort failed. In 1975 the second attempt to reintroduce wild turkeys succeeded. The restoration of wild turkeys in New Hampshire is a wildlife conservation success story, and the state has established turkey hunting seasons each spring and fall.

Ted Walski, turkey project biologist, told me we now have wild turkeys in every county of our state. Mark Ellingwood, one of the state's certified wildlife biologists, said “4,063 wild turkeys were taken in the spring hunting season of 2009, and the thumbnail rule is that this number represents about 10 percent of the wild turkeys living in New Hampshire.” He added, “predators, especially bobcats, have benefited from the explosion of our state's turkey population, which is approaching 40,000.”

Paul Basham, our local nature columnist, is taking your nature-related questions. Curious about the crazy squirrels in your backyard? Noticed some funny-looking plant life? Send your questions to news@theconcordinsider.com with “Nature 101” in the subject line. Photos welcome!