Laugh your pants off with the Concord Community Players

Home » Articles » Laugh your pants off with the Concord Community Players 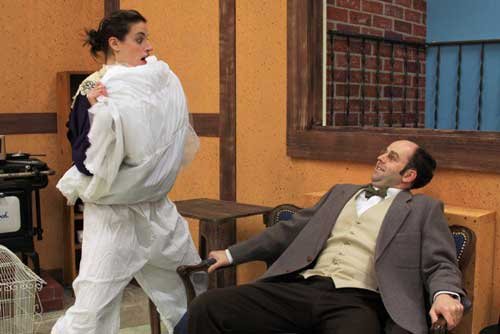 With Valentine’s Day approaching, we’re sure your mind has continually wandered to . . . undergarments.

No need to be embarrassed – you’re not alone. The Concord Community Players have been thinking about skivvies too, thanks to the upcoming production “The Underpants.”

The players will reveal this comedy at the Concord City Auditorium, 2 Prince St., Feb. 12 and 13 at 8 p.m. and Feb. 14 at 2 p.m. For you history buffs, there will be a short history on women’s undergarments displayed in the lobby. The Players will also be raffling off gas cards and gift certificates from the show’s sponsor – Zoe & Co. Professional Bra Fitters – during their “fuel for romance” raffle.

We talked with director Pat Delzell who also directed the Players’ “The Odd Couple” and “Community Doors.”

Where are you from?
I live in Weare, but I am from Ohio, Georgia, Alaska, South Carolina, Maryland, Labrador and Nebraska. . . . my father was in the Air Force.

Tell us about the play.
“The Underpants” was written by Carl Sternheim and adapted by the comedian Steve Martin. It takes place in 1910 Bavaria. It starts when Louise, a young housewife, and her domineering husband return from watching the king’s parade. He is angry at her because her bloomers fell to the ground as the king was passing by, and he is afraid he will lose his job as a government clerk.

She assures him that nobody saw the “wardrobe malfunction,” but men start coming to rent their spare room. The lodgers wreak romantic havoc with Louise behind her husband’s back!
It is both funny and thought-provoking. The New York Times called it “laugh-out-loud funny!”

Why “The Underpants”?
I saw this play and just fell in love with the characters and the humor. I had to direct it!

How did you first get involved with the Players?
I got involved in 1980 when I worked backstage on “Cabaret.” I played a stripper in “Gypsy” the next year and have been a Player ever since. It is a great way to make friends and be active in creating wonderful entertainment.

As a director you have to work with those demanding pas – actors. How do you keep the peace?
I try to weed them out at auditions. I also try to start and end rehearsals on time and provide plenty of refreshments.

And last, but not least, who’s your valentine this year? We won’t tell. Just kidding – we'll tell everyone.
The superb cast, staff and sponsors of “The Underpants!”

Tickets are $17, $14 for seniors 65 and older and teens younger than 18. Leave the younguns at home because this farce is rated PG-13.