Book review: History at The Sandcastle 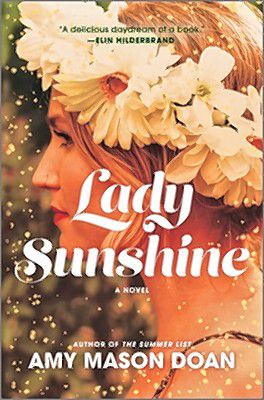 There is just something about reading in the summer; lounging in the sunshine or shade (or hibernating by the AC during a heatwave), and being transported to another time through a good book. I’ve been enjoying a lot of summery, dreamy “beach reads” lately, and one of my top picks is Lady Sunshine by Amy Mason Doan.

The setting swings between 1979 and 1999 along the Northern California coast. In 1999, Jackie Pierce learns that she has inherited her late uncle’s estate, The Sandcastle. She wants to sell it as quickly as possible but learns that her late aunt’s final wish was for a band to record a tribute album to her husband, fictional folk singer Graham Kingston. These events cause Jackie a great deal of stress. A flood of memories overwhelms Jackie, and through these memories, we travel back in time to the summer she lived at The Sandcastle in 1979, when she was 17.

Jackie’s uncle Graham is a well-known folk singer from the 1970s, and the mercurial patriarch of the bohemian Sandcastle, a rambling house with several cabins off the forested and rocky coast of California. The sprawling residence is also home to his wife Angela and their daughter Willa, who is the same age as Jackie. Graham also welcomes musicians, artists, and wanderers of all types; his home is a revolving door of whimsical, creative people who captivate Jackie’s attention the minute she begins her summer-long visit. Teenage Jackie is a troubled girl with a contentious relationship with her father and stepmother, so this summer adventure is a welcome distraction from her life at home.

Jackie soon meets her cousin Willa, and the two immediately become inseparable. They begin writing song lyrics, listen to music, and Willa teaches Jackie how to surf. They explore the wild terrain around the Sandcastle, and it is through this exploration that the two girls learn family secrets, which lead to disaster.

During the parts of the book that take place in 1999, Jackie hints at these painful memories and why she had distanced herself from her family and the estate. These snippets of the past kept me enthralled with the plot of the book; I wanted to find out what happened to Graham and Willa. It is suggested throughout the book that some type of tragedy befell each of them at separate times, but it isn’t until the very end that the details of these events are revealed. As Jackie interacts with the members of the band making the Graham Kingston tribute album, she feels intense nostalgia and recognizes startling similarities to that summer twenty years ago. Jackie becomes determined to solve the mystery of what happened to Willa, but will she be able to handle the truth?