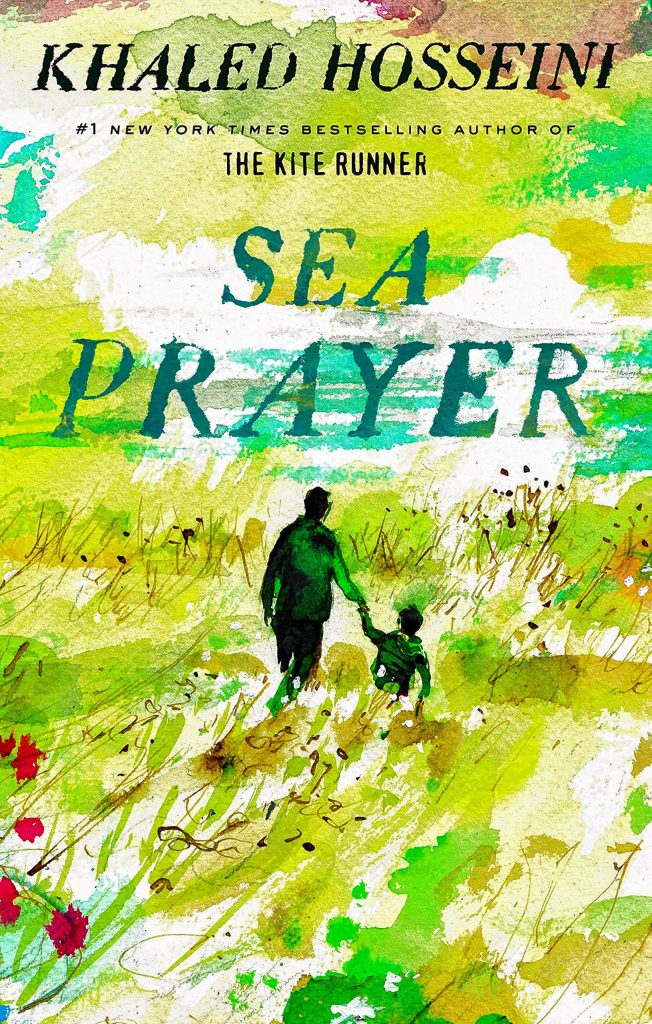 Sea Prayer is a timely, heart-wrenching tale of love, hope, peril, and bittersweet nostalgia experienced by a refugee family. For fans of Khaled Hosseini, the story will feel familiar in content, but novel in format. For those unfamiliar with Mr. Hosseini’s work, this book is a concise, low-pressure introduction to one of the great writers of the 21st century.

This slender volume takes only a few minutes to read, but it packs an emotional punch. The text consists of a poem-like letter from a father to his son, Marwan, written as the two flee their war-torn home of Homs, Syria, by boat. It’s implied that Marwan’s mother has died, leaving the father alone to shelter his child and offer up prayers for their safe transport and uncertain future. As the father gazes into the face of his sleeping boy, he reminisces about happier times in Homs, before the Syrian Civil War compelled them to emigrate for their own safety. Adding to the father’s anguish is his understanding that his son is too young to ever remember the happy times in Homs: for Marwan, memories of his homeland will always be shadowed by the violence that forced him to seek refuge in an unfamiliar, and possibly unwelcoming, land. Dan Williams’ gorgeous, evocative watercolor illustrations bring this story to life–particularly the idealized, vibrant landscapes of Homs before the war.

Hosseini based this book on the true story of Alan Kurdi, a three-year-old Syrian refugee who drowned on a boat trying to reach Greece in 2015. Photographs of Kurdi’s body, captured by a Turkish journalist, focused international attention on the humanitarian tragedy behind the “European migrant crisis” of the 2010s. Hosseini, of course, is no stranger to political unrest: born in Kabul to a diplomat father, Hosseini relocated to the United States as a teenager, when his family sought asylum from the Soviet-Afghan War of the 1980s. Hosseini is now a Goodwill Ambassador for UNHCR, the United Nations’ agency for refugees. He also founded the 501(c)3 nonprofit Khaled Hosseini Foundation, which provides humanitarian aid in Afghanistan, particularly for women, children, and families. Hosseini donated his proceeds from this book to the Hosseini Foundation and the UNHCR.

While shelved as a Young Adult title at CPL, there is plenty of depth here to sustain older readers. I recommend this book for anyone with an interest in the experiences and well-being of migrants or refugees. The combination of Hosseini’s poetical text and Williams’ exquisite illustrations brings humanity to a situation that can sometimes feel remote or abstract for those who haven’t lived it. Sadly, as the nightly news will attest, this topic is more relevant now than ever.