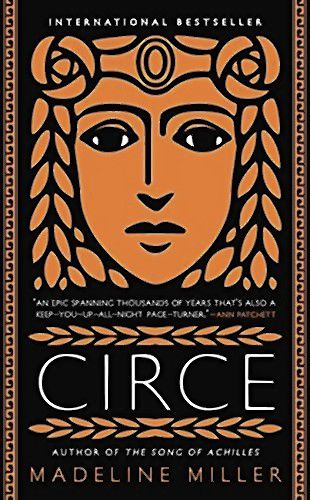 Madeline Miller’s stunning second novel opens with the line “When I was born, the name for what I was did not exist.” So begins the never-ending quest of Circe, the much-beleaguered, secondary antagonist from the famous tale of Odysseus we all remember from literature.  Traditionally, Circe is only featured in a few pages in the Greek myth of Odysseus, where she is portrayed as a calculating, vindictive force, luring wayward sailors to their doom.  One of the most fascinating aspects of this novel is Miller’s approach of shining a spotlight on Circe’s humanity and identity as a woman, rather than a cruel and conniving villain described only from a male viewpoint.  Her story unfolds as an almost Jungian hero’s tale, fraught with challenges both physical and spiritual. Through the pain of complete familial rejection, stark exile, and the agony of loss, Circe learns to define who and what she is, and her place in the world, on her own terms.

Circe was born into a loveless and dysfunctional home. Her father, the sun god Helios, her mother, the nymph Perse, show her nothing but contempt during her childhood and early adulthood, and her siblings are downright evil in their treatment of her and of others.  After Circe demonstrates a destructive and threatening knack for magic, showing her ability to transform mortals into literal monsters and to challenge the powers of the gods, her parents banish her to perpetual exile on the remote island of Aiaia.  It is here, at the start of her banishment, that Circe remarks, “I stepped into those woods and my life began.” She learns to hone her powers and not just survive, but in many ways, thrive on the island.  During her story, we meet familiar characters from Greek mythology, including Scylla and Charybdis, the goddess of wisdom, Athena, the Minotaur, and of course Odysseus. Throughout her journey from her father’s home, to Aiaia and beyond, Circe discovers that her truth lies far beyond the cruel perceptions of her family; she has the capacity to love selflessly and make her own destiny.

Circe may be immortal, and she may possess supernatural abilities, but ultimately, she possesses all the layered, complicated, and beautiful qualities that make us human.  Whatever your journey in life has been thus far, Circe will undoubtedly speak to your soul in one way or another.