The Golem and the Jinni

Home » Articles » The Golem and the Jinni 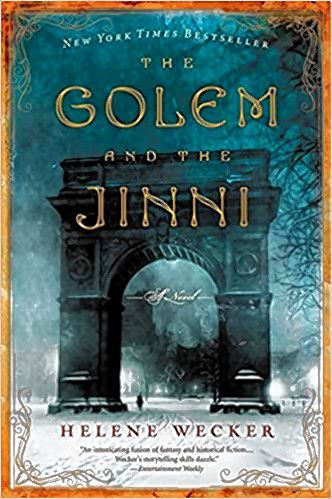 The Golem and the Jinni, Helene Wecker’s masterful debut novel, blends elements of folklore, fantasy, and historical fiction to create a unique tale that you won’t want to put down. Wecker draws from Jewish and Arab mythology to create her story’s main characters, building an immersive world for them based on both historical research and cultural and family lore. (Wecker is Jewish, and her husband is a second-generation Syrian American.) I don’t read much fantasy, but this book thoroughly gripped me and quickly earned a place on my favorites list.

The story opens in 1899 Poland, where Otto Rotfeld, a bitter failed businessman who’s unlucky in love, is having trouble finding a wife. He enlists the services of an unscrupulous Kabbalist, who creates a woman out of clay (a golem), down to Rotfeld’s exact specifications. Unfortunately for Rotfeld, he dies on a boat while sailing to America, leaving his new wife — who is eventually named Chava — to make her way alone in New York City. Chava looks like a regular woman, but she has superhuman strength, can read minds, and has the capacity to create untold destruction if provoked. She is taken under the wing of a kindly rabbi, and tries to live inconspicuously within his Jewish immigrant community.

Meanwhile, a tinsmith in NYC’s Little Syria neighborhood unwittingly releases a jinni (AKA a genie, à la Aladdin and his lamp) from a copper flask. The jinni — who is eventually named Ahmad — has been imprisoned in the flask for a thousand years, thanks to a wizard that he encountered in the Syrian desert. Like Chava, Ahmad appears outwardly human, but possesses otherworldly powers.

Of course, Chava and Ahmad meet, and develop a kinship based on their shared experience as magical beings trapped in a human world. Along the way, Wecker explores themes of identity, free will, assimilation, belonging, and the American Dream. To say more would spoil the excitement, but suffice it to say that their story is both heartfelt and thrilling, and unlike anything I’ve read before.

The first half of this book is a slow burn, but as we get to know and love the characters, the story eventually builds to a riveting climax. I am eagerly awaiting the sequel, which is set to be released in June 2021. Wecker succeeds at creating a perfect balance of realism and fantasy, and her settings — from turn-of-the-century New York to the Bedouin camps of the ancient Middle East — are rich and fully realized.

This book is a great choice if you love history and mythology, are looking for a story to take your mind away from the here and now, or simply want to explore something a little different.