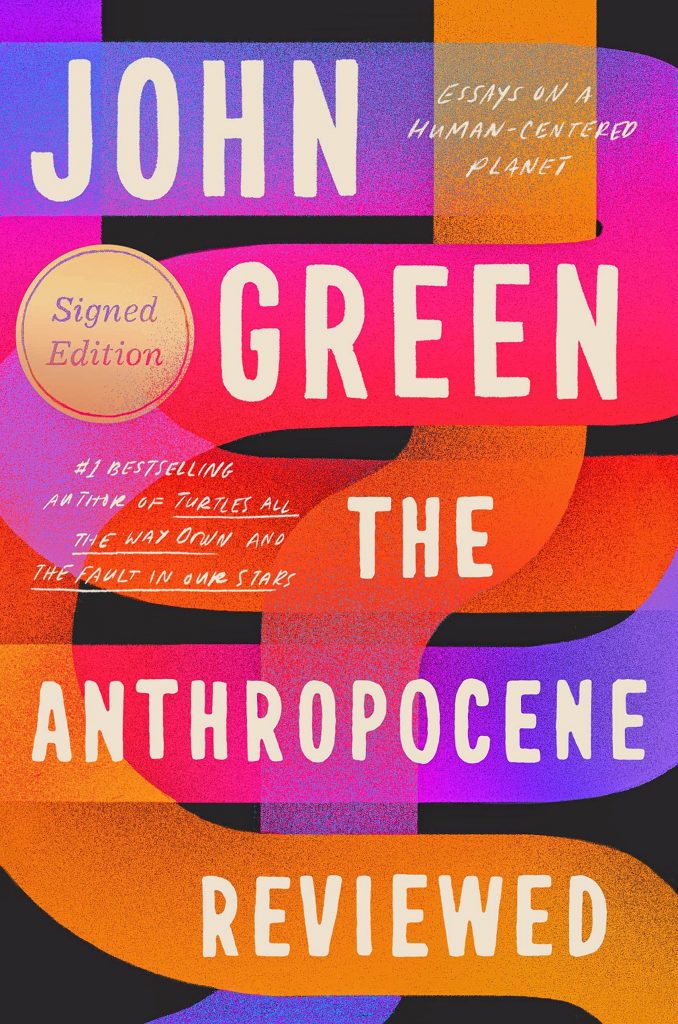 Right from the outset, I’d like to make two points regarding this beautiful collection of essays by John Green. First: consider giving this book a try, even if you’re not usually a fan of nonfiction. I know that some people are averse to nonfiction because it feels more like learning than entertainment – but I think you may be pleasantly surprised by this volume, which flows very quickly from one chapter to the next and is not at all academic in nature.

My second, and related point: do not be intimidated by this book’s title. The term “Anthropocene” simply describes the period in Earth’s history, which we are living through now, that is notable for the influence of human activity on the natural environment. It’s a way of pointing out that humans shape the world around us, rather than passively living with what geology and ecology offer up.

There are several great books out there about carbon emissions, intensive agriculture, and the geological impact of extractive industries … but this is not one of them. Instead, it is a series of snapshots of the author’s life: what it feels like to be a parent, to lose a beloved friend, to root for your team, to manage obsessive-compulsive disorder, or to cope with the coronavirus pandemic.

Each chapter in this book is, quite literally, a rated review of some topic that the author has chosen. He writes for a few pages about his experience with an aspect of modern life – it may be air-conditioning or teddy bears or the entire city of Indianapolis – and then concludes the chapter with a star rating, from one to five stars. Green is acting like a movie critic assigning starred grades to a new film, but instead of entertainment value, the topics earn stars for the way they impact the author’s life, or his community, or the human species as a whole.

(Examples: Diet Dr. Pepper, Green’s favorite, gets 4 stars. The board game Monopoly – for reasons that become clear in the essay – earns a mere 1.5 stars. And “Plague is a one-star phenomenon, of course, but our response to it need not be.”) It’s a clever format that doesn’t feel nearly as gimmicky as I’m making it sound.

The essays are easy to read, but hold a startling amount of wit, insight, and emotional depth. Green is a master of expressing emotional vulnerability without shame – which, in turn, helps us as readers come to terms with our own vulnerability, or anxiety, or joy. The chapter on sunsets was the first, but not the last to bring tears to my eyes.

This is easily one of my favorite books of the year, and I hope that other readers find as much value in Green’s essays as I did myself.