315 parking meters to be added to downtown Concord — locals react 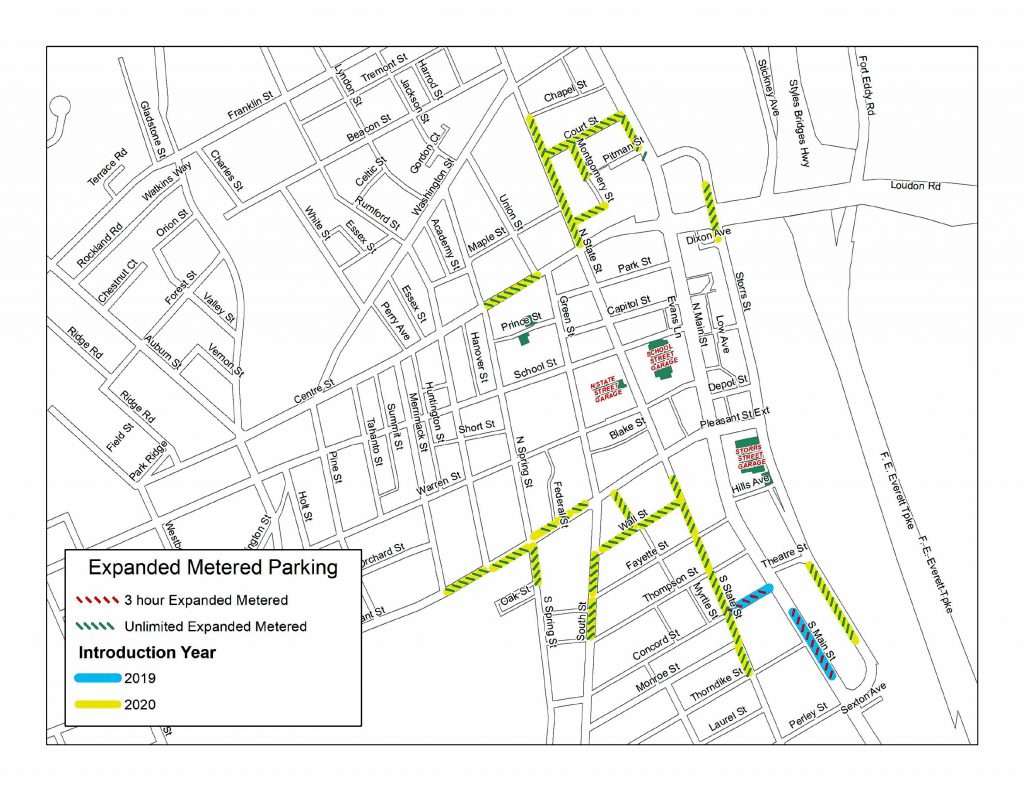 This map shows the locations of expanded meter parking in downtown Concord. The yellow sections indicate where the roughly 315 new meters will be installed and operational by Dec. 2, 2019. Courtesy of Matt Walsh / City of Concord 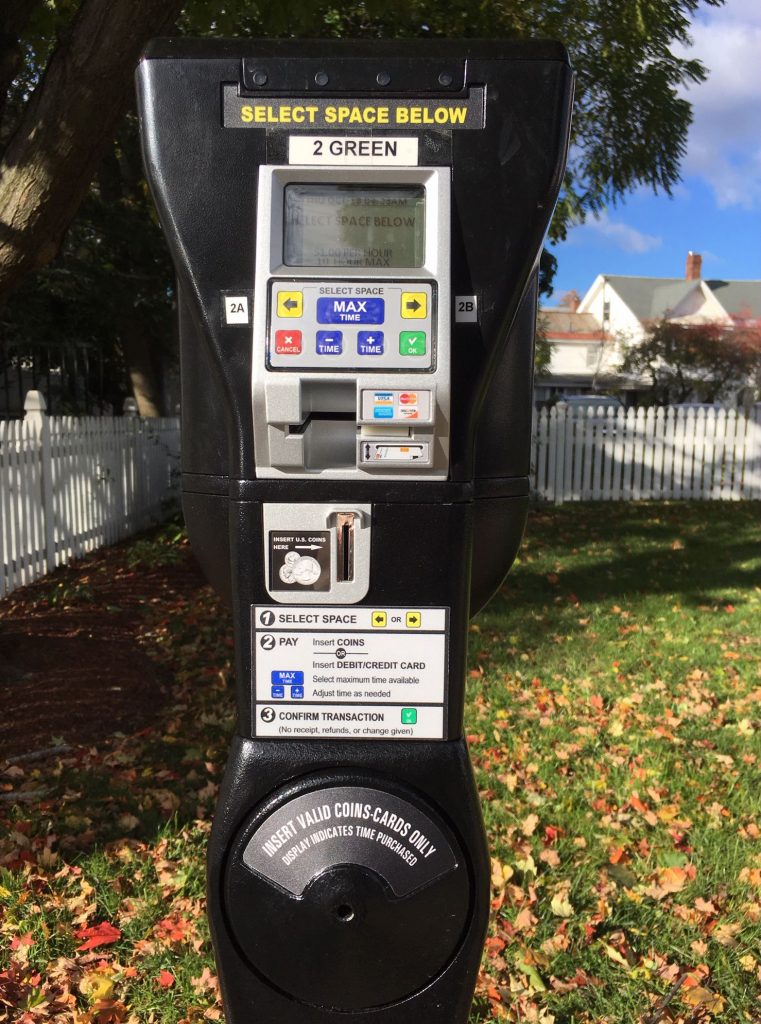 One of the city's new smart meters on Green Street is shown in October 2018. Caitlin Andrews

By Dec. 2, downtown Concord will have about 315 new parking meters at spaces that were previously free to park, and most people are not excited about that.

The city began working on a strategic parking plan in 2013 to try to find ways to get the parking fund back in the black – the fund had operated at a loss since 2007. The first wave of changes has already been implemented – on-street parking rates increased from 75 cents an hour to a dollar and parking tickets for an expired meter went from $10 to $15. The hours of metered parking were also expanded to include the hours of 9 a.m. to 7 p.m. Monday through Saturday. The city also installed about 45 new meters last October on South Main and Concord streets – those meters are for 3-hour parking.

Work is underway right now to install about 315 meters – for 10-hour parking – to sections of roads that are slightly beyond the downtown core. Portions of State, Storrs, Pleasant, South, Centre, Wall and South Spring streets are among the destinations for new meters. Many locations have already had meter posts installed, and Matt Walsh, director of development, downtown services and special projects, said the meter heads will start being installed next week. If all goes according to plan, all 315 new meters will be up and running by Dec. 2. Many people are not looking forward to that day.

“I disagree,” said Jennifer Harrison, who was washing her clothes at State Street Laundromat at 44 S. State St. on Wednesday. South State Street, from Wall Street to Thorndike Street, is one of the sections slated for new meters. Most of the parking spaces on this stretch of South State Street are currently 1- or 2-hour free parking, but those will soon become 10-hour metered parking. Harrison typically parks on the adjacent Concord Street when she does her laundry, so she said the addition of meters on South State (no meters will be added to the section of Concord Street west of South State Street, where Harrison was parked) won’t bother her too much, however she’d still rather not see meters added.

“I do park all over this street, so I’m sure it will affect me,” she said.

“It sucks,” said both Emily Ernst and Nicole Raine, who work at Bridge & Byron Printing at 45 S. State St., right across the street from the laundromat. “I already park on Monroe Street,” Ernst said, referring to the residential side street off South State that offers free parking and will not be adding meters at this time. “Now I’m going to have to go further into these neighborhoods.”

Ernst is not alone in parking on a residential street while working somewhere downtown all day. The barbers at Lucky’s Barbershop & Shave Parlor, at 50 S. State St., do the same thing.

“I park on Monroe,” said Josh Carley, a barber at Lucky’s. Because he never parks on South State Street when he goes to work, he doesn’t worry too much about the meters coming. “Most of us park on the free side streets.”

However, not everyone at Lucky’s is unfazed by the idea.

“It’s definitely going to affect us negatively,” said barber Chris McCoy. “A lot of times we can have 2-hour waits,” he said, explaining how he thinks customers won’t want to have to pay to sit and wait to get a haircut. “We’re not going to have people running in and out,” he said.

On the other side of downtown, Storrs Street is set to get quite a few new meters, too. The section of Storrs Street between Theatre and South Main streets that currently offers 10-hour free parking will become 10-hour metered parking, and the small stretch of the street that runs under Loudon Road will go from 3-hour free parking to 10-hour metered parking. That small section under Loudon Road will change things for Concord Antiques, which has a gallery at 137 Storrs St., right where meters will be installed.

While metered parking should be good for retail businesses in theory, creating more turnover of parking spaces and cutting down on people taking up one spot all day, some see other angles to it.

“The difference between 2-hour, 4-hour and 10-hour is big,” said Tom Balon, owner of Concord Antiques, which has locations at 97 and 137 Storrs St. “On 2-hour ones you can’t go out and re-feed it, you’ve got to move the car. If they put 10-hour in, my take is the city is purely interested in revenue. An unfortunate choice.”

“The bigger concern I have is right now there’s an awful lot of folks who work in and around the Cap Center and downtown and they come up to South State for long-term parking,” Keach said. “It doesn’t really solve the parking problem, what it does is push that demand into the neighborhoods – Thorndike, Monroe.”

Both Balon and Keach provide free parking to their employees, so the addition of meters won’t impact any of their workers, but they both worry about people who work at businesses that do not offer parking, who must find somewhere around the city to park while they’re at work all day. Downtown employees often park in front of Concord Antiques all day, taking a space away from potential customers, said Mary Ellen Mann, an antiques dealer who works out of the 137 Storrs St. shop.

The city does have three parking garages, which all offer lower rates than on-street metered parking. The garages are meant for long-term parkers, such as downtown employees, so the lower prices are meant to incentivize long-term parkers to go to the garages rather than take up a spot on the street all day, Walsh said. The School Street garage is undergoing significant renovations right now, a project with a $5.5 million price tag. Part of the reason for the new meters is to help pay for that garage work – rates at the garage will not increase, because the city still wants the garages to be attractively priced for long-term parkers.

To Keach, that doesn’t seem to be the best plan.

“They’ve looked to the general parking fund to support” the garage renovations, he said. “Some would argue that the garages need to be self-sustaining. It’s not entirely fair for parking meter revenue to be diverted to the garage projects.”

For more information about the parking changes, including maps, copies of the parking committee’s recommendations and various other documents pertaining to the expansion of metered parking, go to concordnh.gov/844/Downtown-Parking.