Book of the Week: ‘Where the Crawdads Sing’

Home » Articles » Book of the Week: ‘Where the Crawdads Sing’ 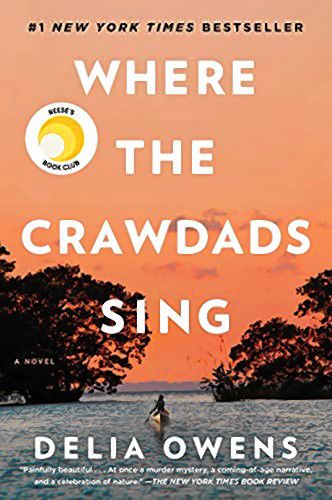 Where the Crawdads Sing

The title of this book is intriguing – Where the Crawdads Sing. And it’s mentioned in the book: “What d’ya mean, where the crawdads sing? Ma used to say that.” Kya remembered Ma always encouraging her to explore the marsh: “Go as far as you can way out yonder where the crawdads sing.” Tate said, “Just means far in the bush where critters are wild, still behaving like critters.”

Kya lives on the coast in North Carolina, and is called the “Marsh Girl” by the local townspeople, an insulting nickname. She watched her mother leave her family when she was 6 years old. Her mother couldn’t stand her father’s beatings and finally put on her fake alligator-skin shoes and walked away. One by one her siblings left. They left Kya alone with her father, a violent, drunken man. Finally, he leaves as well and Kya realizes that nature is her only mother:

“Sometimes she heard night-sounds she didn’t know or jumped from lightning too close, but whenever she stumbled, it was the land who caught her. Until at last, at some unclaimed moment, the heart-pain seeped away like water into sand. Still there, but deep. Kya laid her hand upon the breathing, wet earth, and the marsh became her mother.”

A young boy named Tate helps Kya home one day when she is lost in her boat and can’t find her way back to her shack. He starts leaving unusual bird feathers on a stump for her, and Kya responds with her own gifts. Eventually, they become friends and Tate teaches Kya how to read. Kya is an instinctive naturalist and builds beautiful collections of shells and feathers from the swamp.

But Tate goes to college and doesn’t return to see Kya, as he promised. Chase, the local football hero, befriends Kya, but then betrays her. Kya’s only constant friends are a black couple, Jumpin’ and Mabel. Jumpin’ owns a bait and gas store and helps Kya with gas and supplies. Jumpin’ buys the mussels that Kya digs up so that she has some money.

The book alternates in time between Kya’s childhood in the early 1950s and in 1969 when a murder investigation is taking place. A body has been found under the fire tower in the marsh. It’s a man that Kya knew. Did Kya have anything to do with his death? Was it murder, or was it an accident?

I wondered why there were so many people on hold for this book at the library and decided I had to read it. It is such an unusual book, a blend of a coming-of-age story with a murder mystery. And Kya is a fascinating character. The beautiful descriptions of nature and Kya’s love of the marsh shine through it all. It’s a remarkable book.