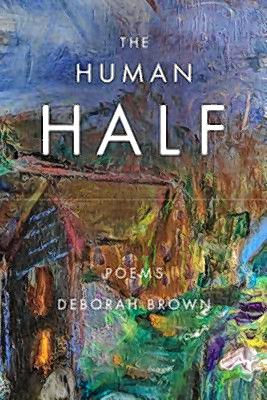 Poet Deborah Brown will visit Gibson’s Bookstore on Wednesday at 6 p.m. to share the intimate poems from her new volume of verse, The Human Half.

Threaded with echoes of familial trauma – a sister’s battle with cancer, a brother’s struggles with depression – the lyric poems in The Human Half reveal an open-hearted speaker who finds solace in the beauties of celestial navigation, the flowers along the railroad tracks, and the brushwork of Vermeer and Van Gogh. Filled with quirks of perception, Deborah Brown holds space for wonder amidst of life’s seasons of longing.

About the author: Deborah Brown’s first book, Walking the Dog’s Shadow (BOA, 2009), won the A. Poulin, Jr. Poetry Prize from BOA Editions and a New Hampshire Literary Award. With Maxine Kumin and Annie Finch, she edited Lofty Dogmas: Poets on Poetics (Univ. of Arkansas Press, 2005). With Richard Jackson and Susan Thomas, she translated the poems in Last Voyage: Selected Poems of Giovanni Pascoli (Red Hen Press, 2010). She lives on a dairy farm in Warner with her husband and their cats.