Kettlehead Brewing Co. is a must-stop destination for any trip to Tilton

Home » Articles » Kettlehead Brewing Co. is a must-stop destination for any trip to Tilton 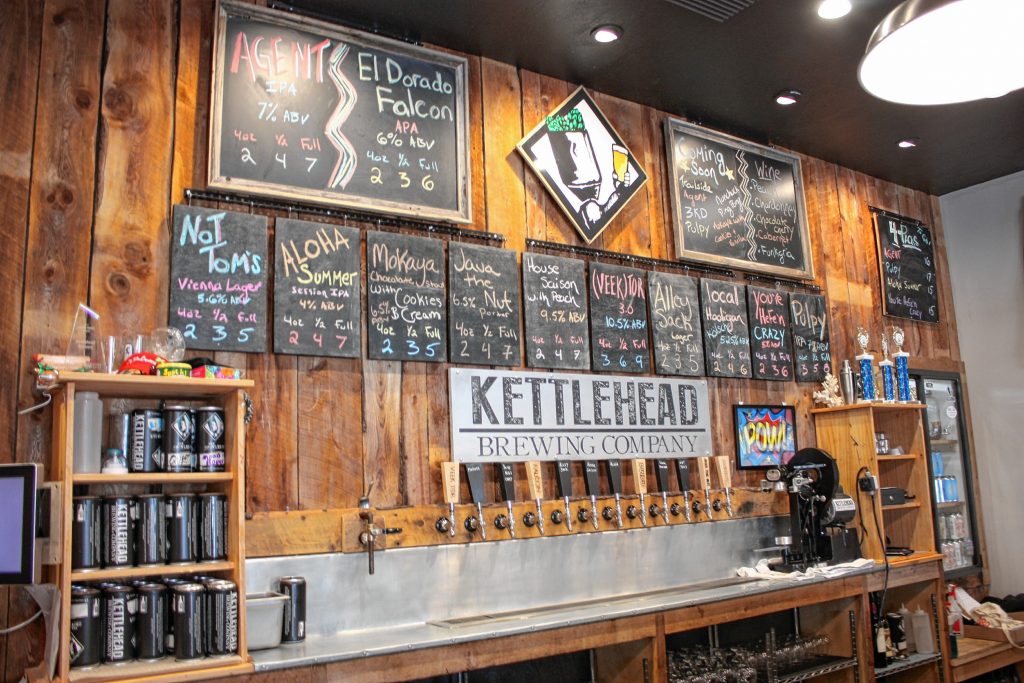 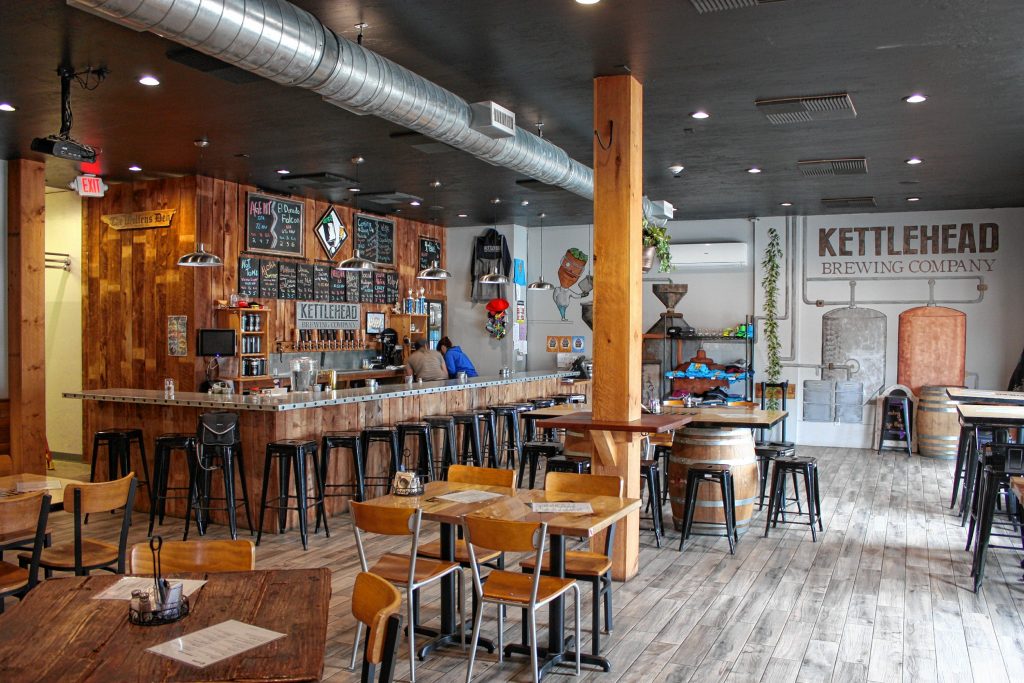 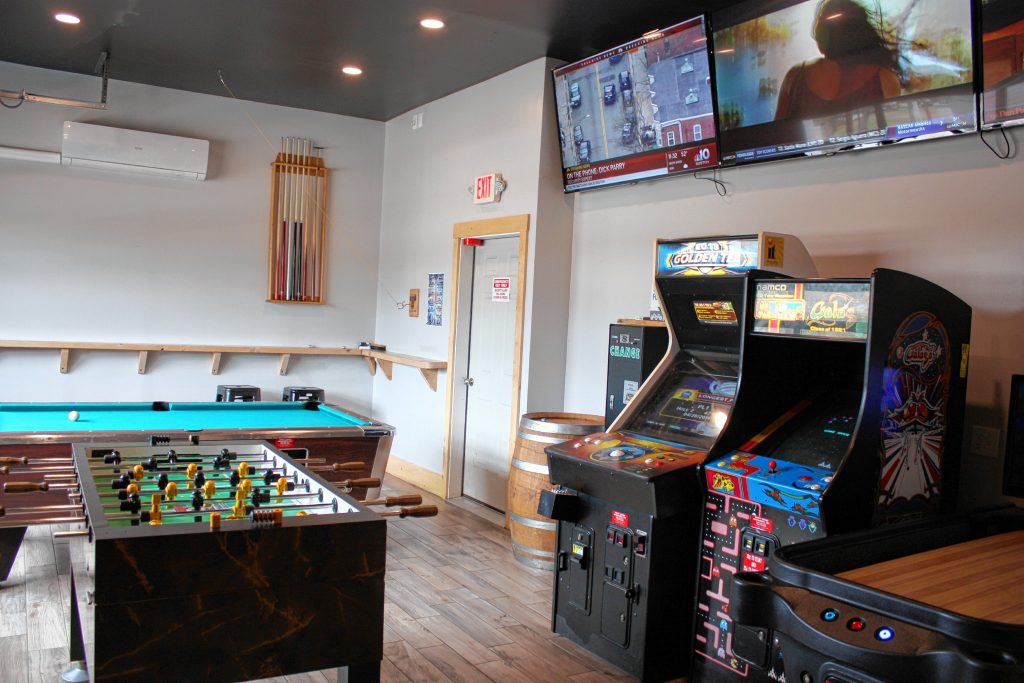 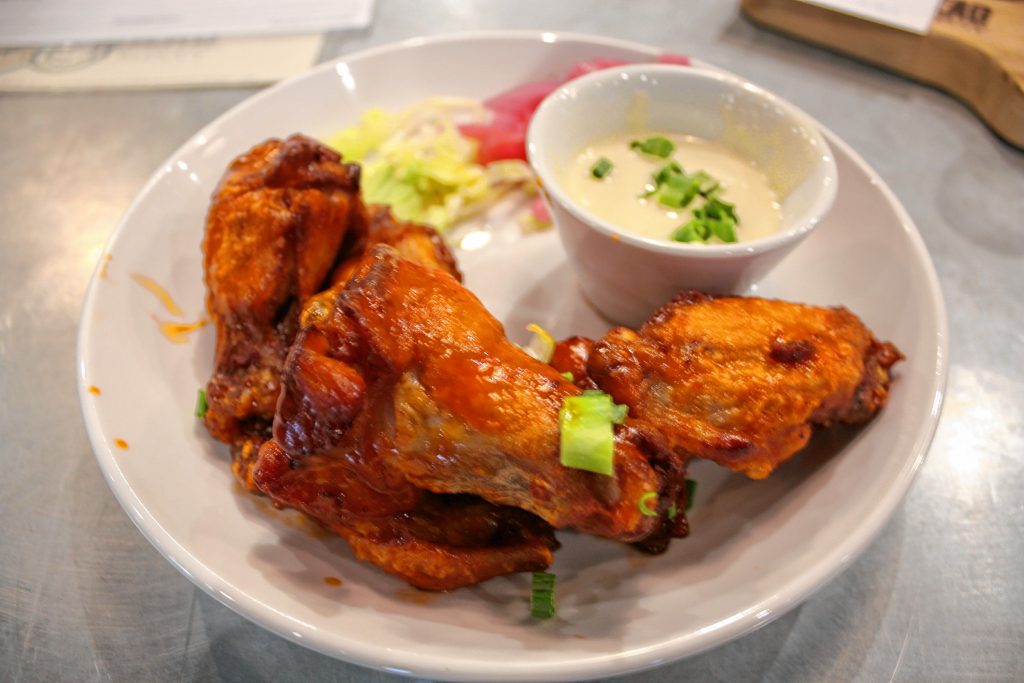 We got an order of Hopped Hot Wings from Kettlehead Brewing Co., and they were mighty hot. JON BODELL / Insider staff 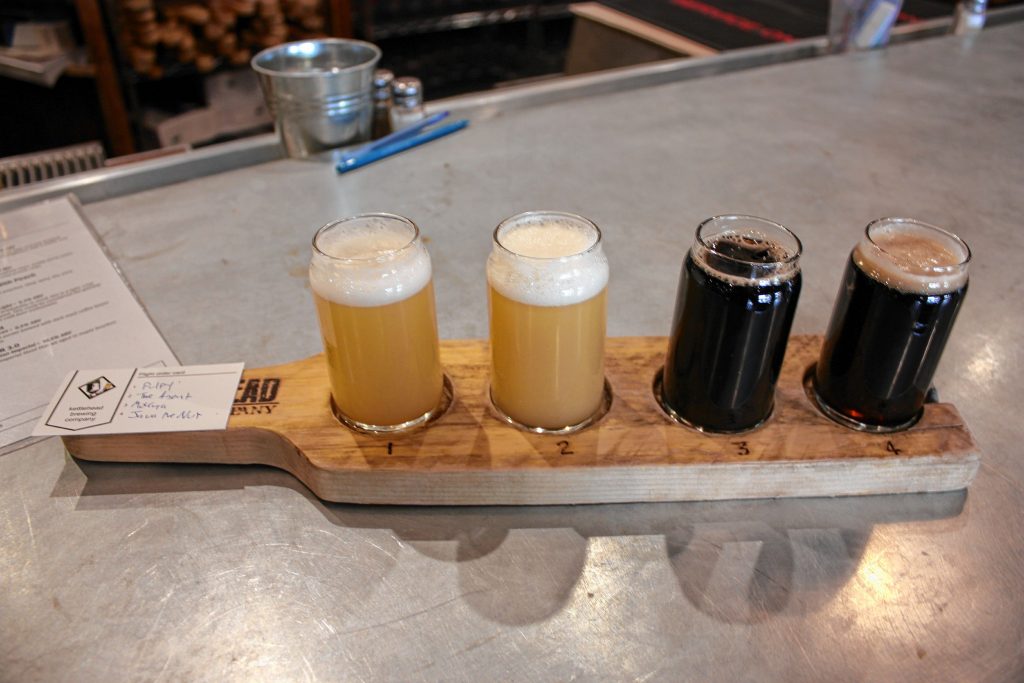 What, did you think we were going to go to a brewery and not try some beer? This flight from Kettlehead Brewing Co. contains (from left) Pulpy, The Agent, Mokaya with Cookies and Cream, and Java the Nut. JON BODELL / Insider staff 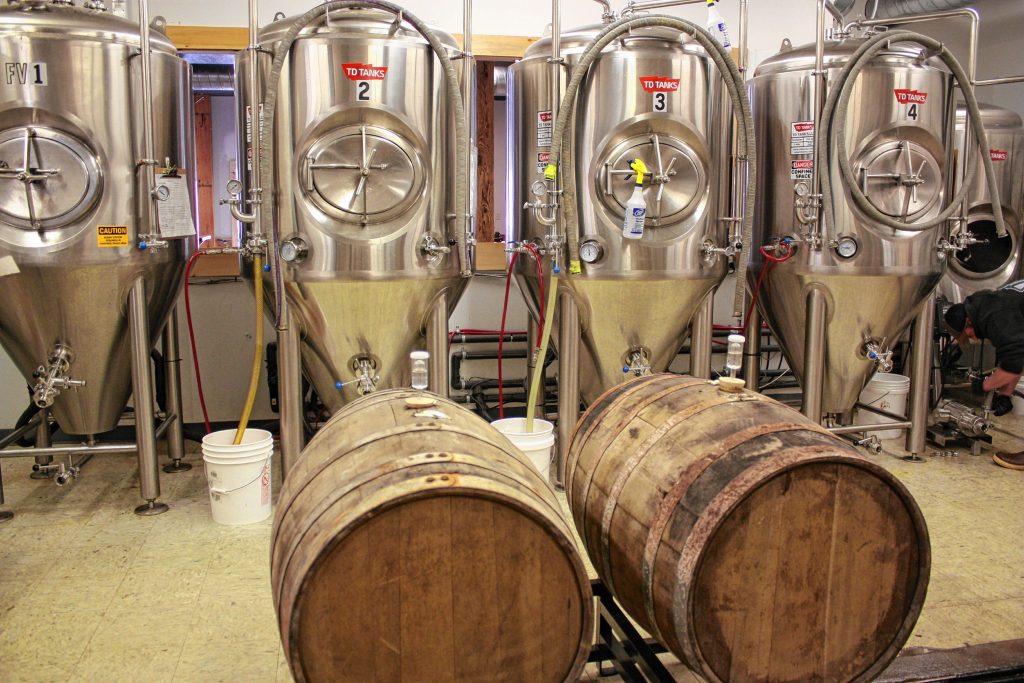 Kettlehead Brewing Co. in Tilton currently has six fermenters (four shown here) but will soon have a total of seven. That's a lot of beer. JON BODELL / Insider staff

There are plenty of places to grab a beer and a bite to eat in Tilton. If you’re after Bud Light and Michelob Ultra, you can probably find endless supplies of those fine libations at the 99, Uno’s, Applebee’s and Chili’s, just to name a few. Those establishments also no doubt offer staple menu items like burgers, mac and cheese, salads and pasta.

Kettlehead is bigger than any microbrewery we have in Concord, but it’s nowhere near the scale of a company such as Samuel Adams. It sits in the happy zone in between in a classification known as a brewpub. Brewpubs must offer a full food menu, and unlike smaller microbreweries, brewpubs can serve wine and liquor in addition to full pints of beer.

Compared to Concord Craft Brewing Co. and Lithermans Limited, the capital city’s two small breweries, Kettlehead is huge. When you walk in, you immediately notice the wide-open space that is the taproom. The main room is sprawling and airy, and there’s even a smaller room off to one side that houses a pool table, foosball table, arcade games, TVs and a garage door-style window that opens to an outdoor patio area in the warmer months. This game lounge area was just added this past November, a year after Kettlehead opened, said Sam Morrissette, one of the owners.

While beer is first and foremost at Kettlehead, they take the food part of the business pretty seriously, too.

“We have a full kitchen – everything is made fresh,” Morrissette said. “We even make pizza dough from the spent grain.”

As far as the beer is concerned, well, there’s lots of it. The taproom has 12 beers on tap at all times, plus cans for sale, and they produce about 50 unique brews a year. If you’re a fan of Kettlehead’s beer, you should get familiar with the taproom, because that’s pretty much the only place you can get it. Some of Kettlehead’s concoctions are on tap at a few places in the general area (True Brew Barista is the lone Concord pourer of Kettlehead), but you won’t find the cans anywhere but at the brewpub.

“It was never our business model” to distribute product all over the land, Morrissette said. Instead, the philosophy employed by himself, co-owner Bill Coulter and brewmaster/partner Nate Wolfenden was to have people come to them, for Kettlehead to be a destination for those who appreciate a quality product.

Morrissette, himself, is among those who can appreciate a top-notch beer. He was an electrician and had been home-brewing for about 12 years, honing the craft and perfecting recipes, before opening Kettlehead. His hobby of home-brewing eventually got to the point where he was just brewing constantly.

“I just brewed more than I could drink,” he said.

He and Wolfenden would brew together all the time back in the day, bouncing ideas off each other and trying new things all the time, just for fun. After a little while, they realized that while it’s great to have fun, it’s even better to make money. The next thing you know, a brewpub was born.

Even though it can be hard to get because of the lack of distribution outside the brewpub, Kettlehead has no problems moving product. The taproom was about half full at noon on a Wednesday, for one, and rather than using kegs to feed the taps at the bar, they use serving tanks, which are essentially huge kegs or small fermenters – they’re just really big metal containers that hold lots of beer.

The can sales are also extremely popular. Kettlehead sells about 100 cases of cans per week, Morrissette said, which is more impressive when you consider that all sales are made right there on site.

One thing that sets Kettlehead apart from most small brew operations is the lack of growler sales or fills. While many small breweries encourage patrons to buy 64-ounce resealable glass growler bottles which can be refilled at the brewery, Kettlehead doesn’t do them at all. Instead, they offer crowler cans, 32-ounce cans that don’t close again once you break the seal.

You got all that, right? There will be a quiz later.

On the food side, the menu features things like pizzas with crust made from spent grain, fried bologna sandwiches, steak and cheese dumplings, deviled eggs and pretzel doughnuts. Like traditional restaurants, there are also daily specials – last Wednesday, a spicy ramen bowl and garlic beef nachos were the featured items.

Since it was about lunchtime during our visit, we decided to order some stuff to get the full Kettlehead experience. Having never tried any Kettlehead beers before, we ordered a flight containing Pulpy, The Agent, Mokaya with Cookies and Cream, and Java the Nut. To order a flight, a bartender hands you a card with four empty lines on it and a pen, and you just write down, in order, which beers you want. In turn, the beers are served in the order in which you wrote them (going left to right).

For food, we put in an order for Hopped Hot Wings with beer blue cheese, requesting the highest level of heat possible.

Out first was the flight – apparently it’s quicker to pour four small beers than it is to cook a plate of hot wings. The two beers on the left – both New England IPAs – looked very similar, as did the two on the right – a stout and a porter.

Up first was the Pulpy, a NEIPA triple dry-hopped with a combination of mosaic, citra and El Dorado hops, checking in at 7 percent alcohol by volume.

This was a super-juicy, hazy, refreshing NEIPA. Its quirky description on the beer menu says Pulpy is a friend of the brewery’s, and he loves juicy IPAs, and that this particular brew happens to be his favorite. Whether “Pulpy” actually exists or not is a mystery, but one thing is for sure – this is one of the juiciest beers you’ll ever have, and it’s as refreshing as a glass of lemonade.

Next stop, The Agent – Kettlehead’s flagship IPA. This beer is double dry-hopped with notes of orange and grapefruit, balanced out by a strong malty backbone.

This beer had a danker, earthier smell than Pulpy, and it tasted ever so slightly sharper. If Pulpy was like lemonade, The Agent is more like ginger ale – still a very refreshing, pleasant drink, but with a bit more of a mature, bitey taste. This one had a drier finish than Pulpy, and felt a little stronger overall, despite having the same alcohol content. In the end, it was every bit as enjoyable as the Pulpy was.

Next was the first of two dark beers, Mokaya with Cookies and Cream. This beer’s description says the chocolate stout is “jam packed with enough cream filled chocolate cookies it forced the Cookie Monster off the wagon just to have a sip.” After tasting it, we could see why.

We’d never had a beer anything like this one before. The first sip tasted very chocolatey, with some hints of whiskey. On the finish, that cookies and cream flavor really comes through, and not in a way-too-sweet fashion. After two or three sips, you’ll swear you’re actually drinking liquified, alcoholic Oreos (which sounds like a fantastic idea, by the way).

The final stop on this flight was Java the Nut, a coffee coconut porter brewed with dark-roast coffee beans and real coconut. The first sip tasted strongly of sweet coconut, which was balanced out by a smoky, toasty malt taste. The coffee showed up in a big way on the finish. Despite the rich, dark nature of this porter, it drank surprisngly light and easy.

About halfway through the flight, the wings were served. After the first bite, the dominant flavor profile is sweetness. The sauce tasted like something between teriyaki and barbecue, but was hard to pin down exactly. Then, about 30 seconds later, the sweetness gave way to some serious heat.

Being somewhat of a snob for spicy food, this Insider cavalierly downed a couple wings in a matter of seconds, only to regret the decision very shortly thereafter as the hidden heat from these wings caught up all at once. After the second wing, the bartender poured us a glass of water, as it was obviously needed.

Never having been a fan of blue cheese (cooling sauces are for the weak), we didn’t plan on using any, but after sweating through three wings, we figured it couldn’t hurt. The sauce was actually much better than typical blue cheese, and the beer flavor was definitely noticeable. The best part was no oddly textured chunks, like most blue (or is it bleu?) cheese dressing contains.

All in all, if you’re a foodie and/or a beer aficionado, you should really check out Kettlehead Brewing Co. the next time you’re in Tilton.