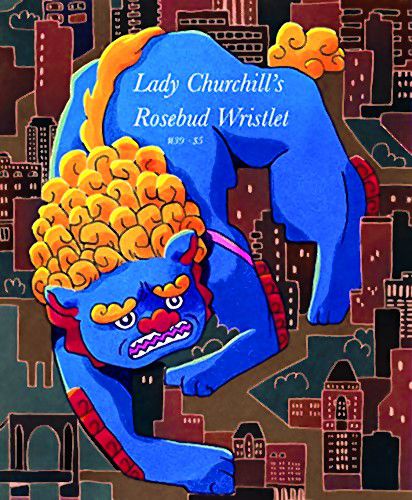 “How can you be glad about apple strudel when babies can’t even depend on gravity, and dogs grow out of people’s hair?” Julie Andrews fields this question through her mail slot in “The Problem with Strudel” by Seth Tourjee; you can read the full story in issue no. 25 of Lady Churchill’s Rosebud Wristlet (hereafter, LCRW or Wristlet). LCRW is a zine published semiannually under the aegis of Northampton-based Small Beer Press, and edited by Kelly Link and Gavin J. Grant (the press’s founding editors). LCRW skews, as the inclusion of Tourjee’s story might suggest, toward speculative fiction, and several heavyweights of the genre have been published therein; Hugo-, Nebula-, and Tiptree-prize winners abound. But perhaps the greatest joy of LCRW’s is the rather left-field work on display, even and especially from these established authors. Le Guin contributes poems to LCRW no. 16; to no. 26, Ted Chiang gives an essay on folk biology, memory, and whither science fiction should aspire; to issue no. 6, Karen Joy Fowler, author of The Jane Austen Book Club, contributes the story “Heartland,” about a fast-food worker in The Land of Oz.

Alongside these authors, already rather widely acclaimed by the time they tried on the Wristlet, there are plenty of marvelous up-and-coming writers who contribute to the zine. In issue 33, there is fine work by Carmen Maria Machado (her collection Her Body and Other Parties: Stories made the National Book Award shortlist in 2017), and Sofia Samatar (author of the much-awarded A Stranger in Olondria). In LCRW no. 20, the Indian writer Anil Mennon contributes “Invisible Hand,” a brief and excellent origin story for, among other things, the time dimension as we (don’t) understand it. With the writer and physicist Vandana Singh, Menon co-edited Breaking the Bow: Speculative Fiction Inspired by the Ramayana, an anthology of speculative fiction that is breaking new ground along with the bow, showcasing work by many authors from across India and the Indian diaspora; certainly, both Menon and Singh are writers worth watching, and “Invisible Hand” is a fine show piece. In the most recent issue of LCRW (no. 38), Joanna Ruocco’s “Stone, Paper, Stone” stands out as a dark and particularly bewitching instance of literary mise-en-abyme, set in a quarrying town, and relating at least the affairs of one young worker with the ostracized Carrick Cark (whose name could be taken to mean “stone weighed down with woe”).

The 39th Wristlet is due out in June, and along with most previous issues, will be available to patrons of the Concord Public Library through hoopla digital.

Bonus local flavor: Lady Churchill’s was first sold out of Avenue Victor Hugo Bookshop (then of Newberry Street in Boston, now of 1 Lee Hill Road in Lee). One of the shop’s proprietors is the novelist Vincent McCaffrey, and his A Slepyng Hounde to Wake (from, you guessed it, Small Beer Press) is available on our shelves. It’s about a bookseller who solves murders.