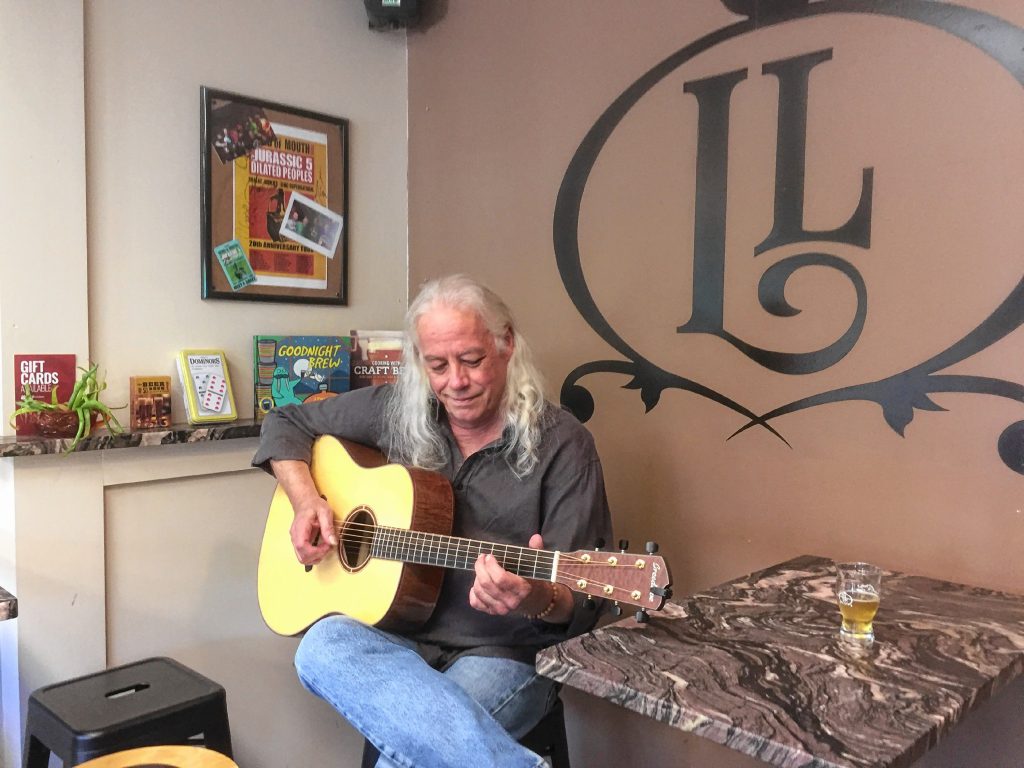 Ed Gerhard visited Lithermans Limited before the concert to help make the beer inspired by his album, Sunnyland, and play a couple tunes on his guitar. Gerhard will play in the Capitol Center for the Arts Spotlight Cafe on Saturday, the same day Litherman's unveils its new brew. Courtesy

If you’ve had one of Lithermans Limited beers, there’s a chance you’ve realized that each one is named after a song or album. If not, well, now you know

Using clever puns and loose interpretations, it’s clear that the guys who started Lithermans are big music fans. With beers named Bow Wow Yippie Yo IPA, This Is How We Gruit and Tangled Up In Bruges Saison, it’s a pairing that seems to work well.

Until just recently though, they had never collaborated directly with a musician on a beer. But on Saturday, you can cross that one of the old list when you hear the musician who inspired the beer, Ed Gerhard, and be one of the first to taste the exclusive brew, Sunnyland, at the Capitol Center for the Arts.

“Music and beer are always a perfect combination,” Gerhard said. “So I thought it would be fun to collaborate on something.”

Gerhard, whose music Hauptly-Pierce was first introduced to 20 years ago, will play in the Spotlight Cafe with a mix of his original music, blues and covers.

“I usually set a plan on what I want to start with and end with,” Gerhard said. “But I don’t think you can be a proper artist without doing one Beatles song.”

You can also expect to hear the likes of Bob Dylan, Joni Mitchell and others.

It’s Gerhard’s first performance in Concord since 2011, also at the Capitol Center, and is excited to make a return trip.

“I love Concord,” Gerhard said. “I’ve always had a really great time there.”

It was a number years ago when Hauptly-Pierce first gave Gerhard a bottle of one of his homebrews. He gave him another sampling last Christmas time and then in February the two had a conversation about collaborating on a show/beer release. Then it just came down to making it work with Gerhard’s touring dates and when Lithermans could produce the beer.

“I just said I’d love to collaborate with you and do a beer inspired by your music,” Hauptly-Pierce said.

A couple weeks ago, Gerhard swung by the brewery and helped make the brew inspired by his 2006 album. Sunnyland is best described as a blonde ale brewed with orange peel. And if you’ve ever tried one of Lithermans concoctions, you know it’s worth a taste.

“He didn’t put me to work too much, but he let me pour some hops in,” Gerhard said.

The beer will be available at the Capitol Center for the show, along with being put on draft at the brewery on Saturday. It will also appear at a few places around town who carry Lithermans.

“Seeing a small craft brewery do their stuff is fascinating,” Gerhard said.