We found lots of food options in Hooksett

Home » Articles » We found lots of food options in Hooksett 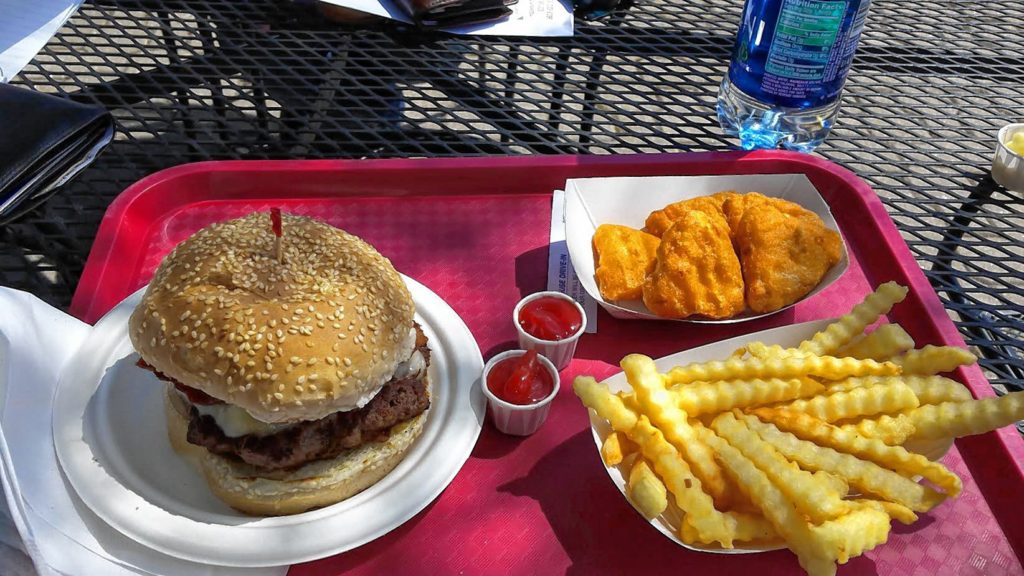 This bacon cheddar burger, fries and mac and cheese bites were found at the Brick House Drive-In. 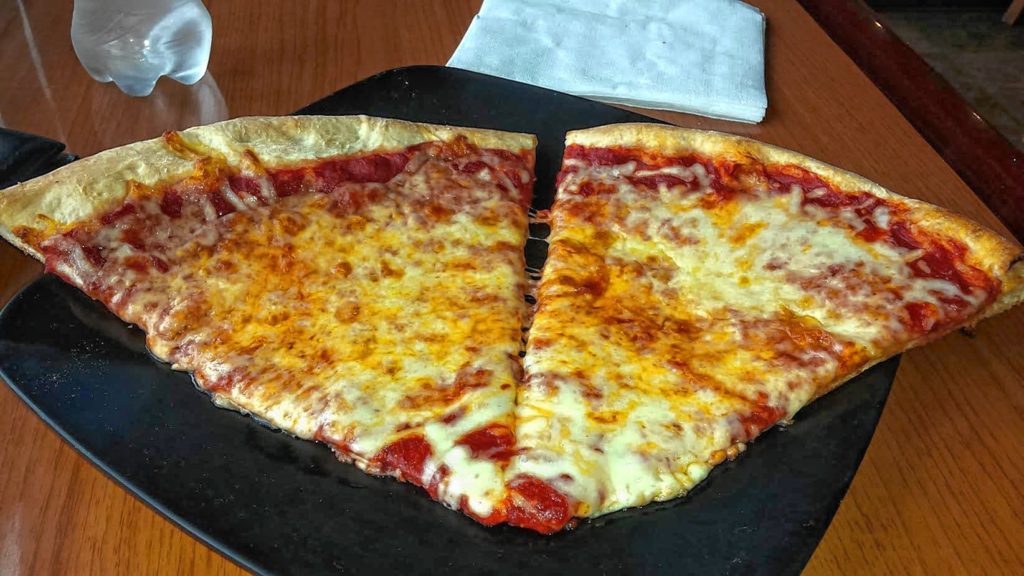 The Pizza Man dishes up some pretty tasty (and big) slices. 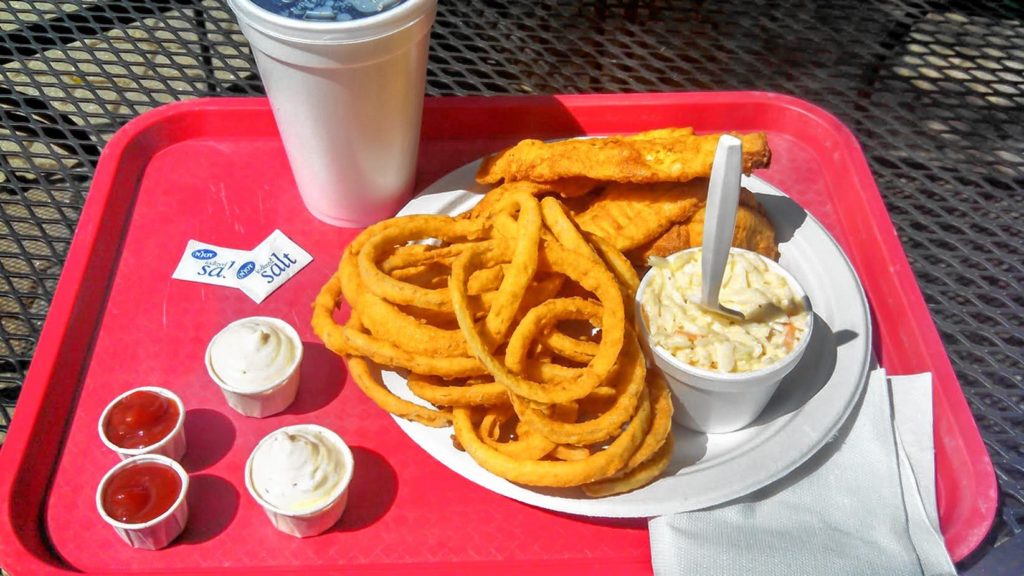 That’s a fish and chips plate from Brick House Drive-In with cole slaw. But as you can see, we actually substituted onion rings for fries because they came so highly recommended. 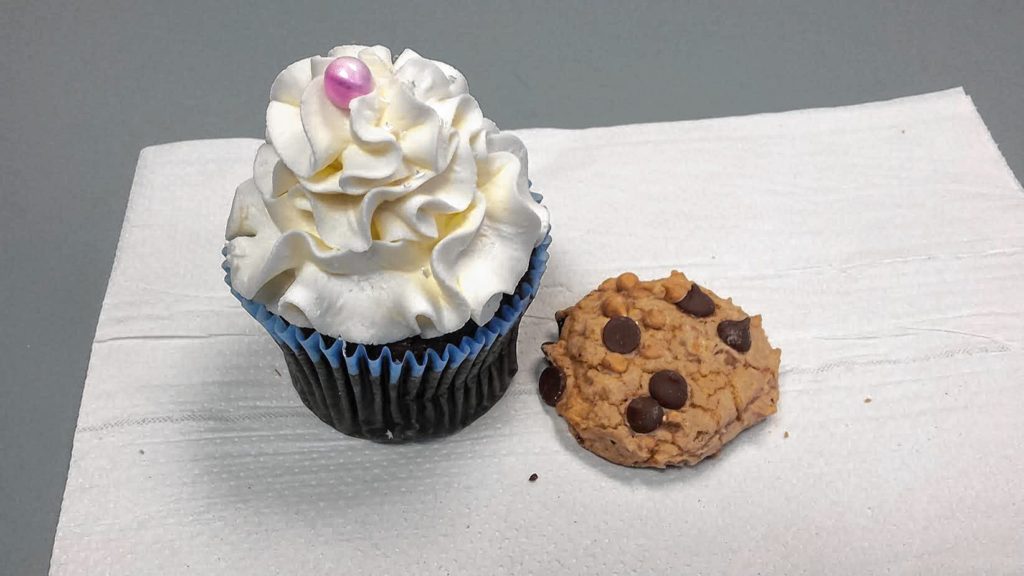 We grabbed a chocolate raspberry cupcake and a triple chip cookie from The Cake Fairy.

One of our favorite parts about exploring a new place is the food.

There’s just something about traveling around a town you’ve never visited in search of a great local spot to eat.

And when in Hooksett, you’ll have no problem finding some great eateries – no matter what you’re in the mood for.

There are plenty of chain restaurant options, and that’s never a bad thing, but on this adventure, we were in the mood for something new and different.

When the idea for a Hooksett field trip first came up, we were offered up some recommendations and ideas as to where to find a bite.

We wrote them down and kept those notes with us during our day on the town, but at the same time we also wanted to do our own searching – as well as talk to some of the locals.

Since we did have to make the long drive to Hooksett, we ate breakfast before leaving the office. So when we entered the uncharted territory that is Hooksett, we were ready to dig in.

In case you’re wondering, we were told that Tucker’s (the same one that came to Concord last year) is quite good, as is Roots Cafe in the historic Robie’s Country Store. But we’ll have to go back and check them out another time, off the clock.

So when lunch time rolled around, after spending a morning of exploring –and test driving vehicles at HK Powersports – you can imagine just how hungry a couple of newspaper guys can be.

Now when it comes to lunch options in Hooksett, we could fill these two pages with a list of places to go. But we had to make a decision (our stomachs were growling) and after a couple conversations with some locals, we heard that the Brick House Drive-In Restaurant was a staple in town.

The Brick House (1391 Hooksett Road) is your classic New England drive-in that has been there for more than 40 years.

After parking right out front, we strolled up to the outdoor ordering windows to check out the menu.

It took a few minutes to go over all the options, but since this was, like we said before, a classic New England drive-in, we figured why not go for a couple of meals that just scream drive-in.

So one of us opted for the day’s special, a bacon cheddar burger with grilled onions and fries, with an order of mac and cheese bites on the side. The other went for the fish and chips, but instead of chips, we substituted onion rings in an effort to try as many things as we could – plus, they were also a recommendation.

We weren’t sitting down for long at a nice sunny table in the back before our numbers were called. There’s also the option to sit at picnic tables, ones with umbrellas and a porch area that was enclosed during the early season.

The burger was juicy and flavorful, while being cooked all the way through. The way you expect a drive-in to cook it.

The cheese was well melted and the bacon was crispy and delicious, and the onions were a nice touch.

The Brick House serves up your classic crispy crinkle fries, with your choice of salt and ketchup.

The mac and cheese bites were gooey on the inside and crunchy on the outside, and the order of five was not hard to polish off.

The fish was lightly battered and fried, and tasty – exactly how you’d expect it to be at your local drive-in. The Brick House uses flounder for its fish and chips, and it worked well. There sure wasn’t any left on the plate when lunch was over.

You never really know what you’ll get when ordering onion rings from a new place. It seems as though no onion ring is made the same. But the Brick House served us the crispy, thinner style ones, which had a nice ratio of batter to onion.

We were full, but definitely had room for dessert. This was a day trip after all.

Like most drive-ins, the Brick House also served up ice cream sundaes and cones, but we were on a mission to try as much as we could in Hooksett.

Instead of driving around aimlessly looking for somewhere to try the local sweet delicacies, we hit up the ol’ Google machine with three simple words: Hooksett NH bakery.

The top result was The Cake Fairy USA, and the little description said “The Cake Fairy is a custom bakery located in Hooksett, NH.” Sold.

The cakes and mini cupcakes are to order, but the rest can be found in the two glass cases in the shop, located conveniently next to a Eaton’s Cake and Candy Supply.

Now this was a hard decision. Not just what to try, but which variety. But in the end, we had to try a cupcake. It’s kind of the staple of any bakery. And after careful consideration, we went with the chocolate raspberry.

It was a chocolate cupcake, filled with raspberry, a thin layer of chocolate fudge on the cupcake, and topped with a buttercream frosting.

And let’s just say, it was as good as it sounds. The cupcake was fluffy and chocolatey, and the raspberry was just the right amount to complement the cupcake.

The fudge was a nice addition, and the frosting had the right amount of sweetness.

Just an FYI, many of the cupcake flavors change daily, so you never really know what you’ll find.

We also added two mini triple chip cookies to the order for research purposes, of course. They were also very good, soft and very heavy on the chocolate, white chocolate and peanut butter chips.

The Cake Fairy is a relatively new spot, having been open almost a year, and it’s worth the trip.

After spending the rest of the afternoon dealing with the tough part of our job (see day trip to follow), we wanted to grab something else to eat before making the long drive home.

One of our coworkers had spoken highly about The Pizza Man, and if you can’t trust the people you work with, who can you trust?

So before heading out of town, we made a pit stop at the local pizza shop at 254 W. River Road to grab a couple slices.

In our expert opinion, the best way to judge a pizza place is by eating a slice (or two) of cheese. That way you can really taste their dough and sauce. You won’t be thrown off by a bunch of toppings.

So two slices of cheese it was. And yes, they were absolutely as good as they look. The slices were big and fresh. The crust had a great crisp to it, the cheese was perfectly melted, and the sauce was very good.

This is a slice worth trying, and at a great price. We caught the tale end of the lunch special, which is Monday through Friday, 11 a.m. to 4 p.m., where you can get two slices of cheese and a drink for $4.95.

Thanks for the recommendation, Hannah!

Now obviously there are lots of other places we could have gone to eat. We just went where our stomachs took us.

We heard that Bavaria German Restaurant (1461 Hooksett Road) and its authentic German cuisine was good.

When we stopped at New England’s Tap House Grille for a beer, the food smelled delicious. There were plenty of pizza places, sandwich shops, fast food joints and chain restaurants to choose from as well. You’ll just have to go explore and taste for yourself.