We drove a crazy vehicle at HK Powersports

Home » Articles » We drove a crazy vehicle at HK Powersports 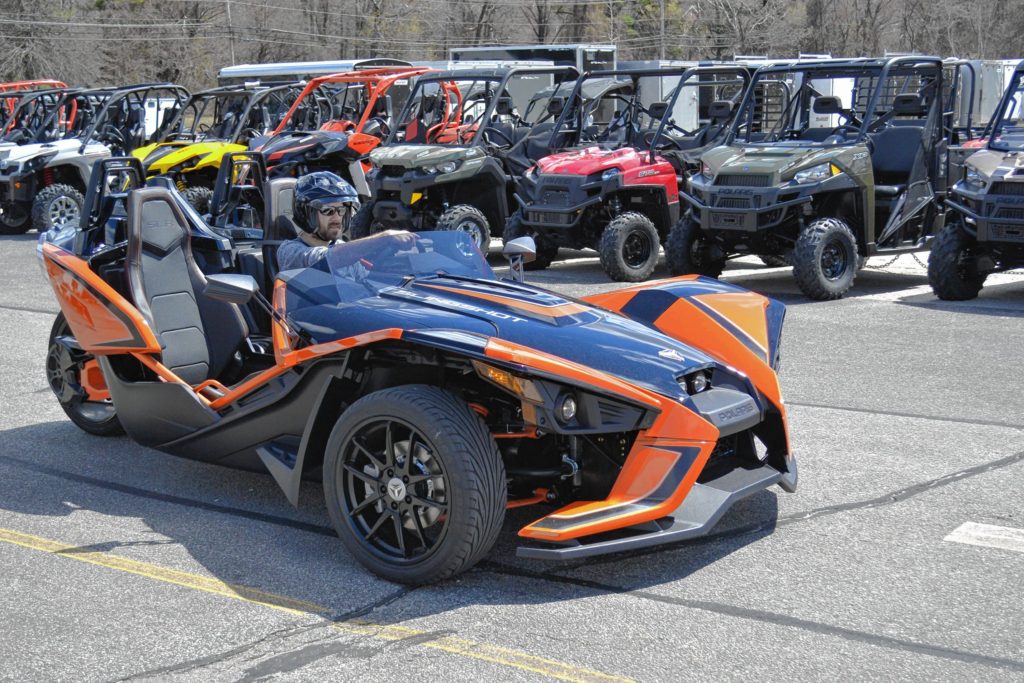 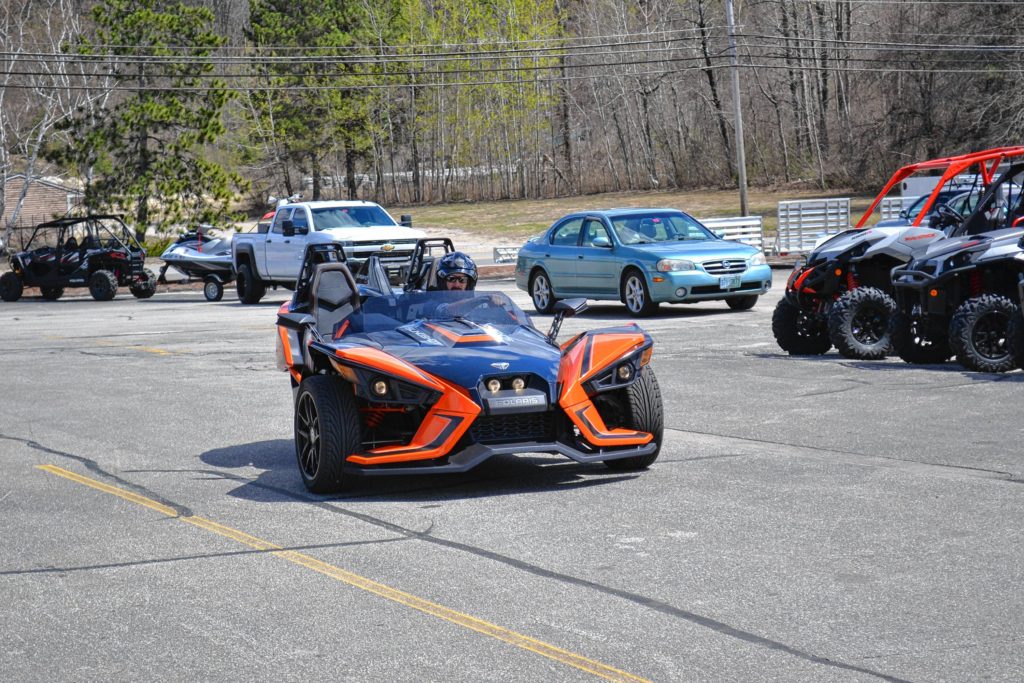 Jon got to tool around in this Polaris Slingshot at HK Powersports in Hooksett last week, and it was a truly exhilarating experience. If you have the means, I highly recommend picking one up. (TIM GOODWIN / Insider staff) 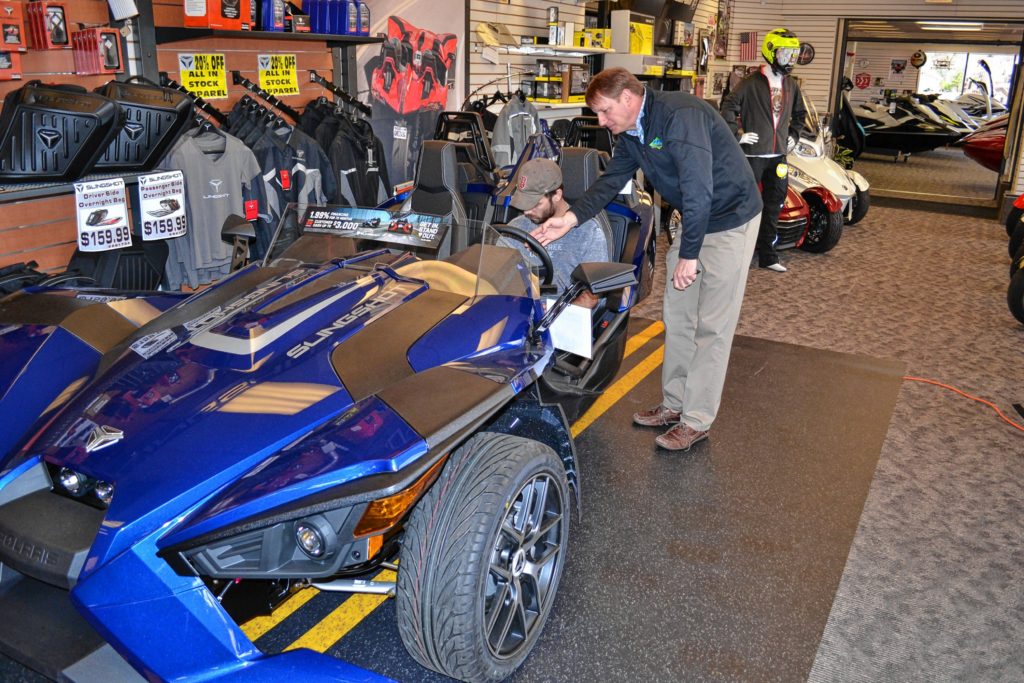 HK Powersports owner Jim Whaley shows Jon a thing or two about the Polaris Slingshot inside the showroom in Hooksett last week. In a matter of minutes, Jon would be outside in a slightly different model, tearing up the pavement like there's no tomorrow.(TIM GOODWIN / Insider staff)

No roof, no doors – no problem.

That was the theme of the day when we went to HK Powersports in Hooksett last week.

The store is celebrating its 40th anniversary this year, and they invited us to come by and check out all the big-boy toys they get to play with – I mean sell – every day.

“We sell fun,” owner Jim Whaley said as we poked around the indoor showroom, which was full of motorcycles, dirt bikes, ATVs, personal watercraft and three-wheeled vehicles, among other cool stuff.

We were told ahead of time that we would likely be able to drive something HK sells, we just weren’t sure what that would be. When we pulled into the parking lot, there was a super-aggressive and kind of odd looking thing sitting out front, bright orange with black accents and three wheels. “Imagine if we get to take that,” I said to Tim in a joking manner – obviously we wouldn’t be allowed to drive something like that.

But when we walked inside and chatted with Whaley for a few minutes, he dropped the big news on us: we were actually going to be allowed to drive that thing – a Polaris Slingshot.

Huh? Who would trust a couple of guys like us with something as wild and surely dangerous as that?

Apparently, Whaley did, and boy were we glad that was the case.

The first step was showing me a little bit about how it works – probably a good idea before turning me loose in a $26,599 speed machine. It has two wheels in the front and one big one in the back. It has a steering wheel and a five-speed manual transmission, like a car. Under the hood is a 1.7-liter four-cylinder engine that launches the Slingshot to 60 mph in 5 seconds and produces a top speed of 135 mph. It has a radio with shockingly nice speakers.

The only things the Slingshot doesn’t have that a car does are a fourth wheel, doors and a roof – and who needs those, anyway?

Whaley told me that it’s very much like driving a car – it’s a five-speed, with reverse located all the way to the right and down. And a big plus is that you don’t need a motorcycle license to drive one, at least in good ol’ Live Free or Die New Hampshire. That was fortunate, because neither Tim nor I have a motorcycle license. A regular driver’s license is sufficient.

Once the tutorial was over, it time to go outside and try this for real.

In the parking lot was a slightly different – and better – model than the one I sat in inside the showroom. The orange one outside had all kinds of upgrades from Sparco, which you might recognize as a performance parts maker for traditional automobiles (sport seats, shifters, rims, etc.).

It starts like a regular manual car – put the key in, press the clutch all the way down, turn the key, release the clutch. I was immediately impressed with the sound – it sounded more like a thundering, throaty V8 truck with smokestack exhaust pipes than a little three-wheeled four-cylinder kart-type thing.

Also immediately noticeable was the clutch. There was so little pressure, it felt like a child could do it (though that wouldn’t be recommended) with ease. On the other hand, the gas pedal was stiffer and harder to press than I was expecting. I quickly learned why.

After pulling on a full-face helmet – not required in the Granite State but mandated by HK’s insurance company (and generally just a good idea) – and setting the radio to a reasonable volume, Tim hopped in the passenger seat and we took off – literally.

This is a street vehicle, not an off-roader, so we pulled out the back of the lot at HK and turned onto an industrial road with no traffic – perfect for test-driving a machine like this.

Once the Slingshot was pointed straight down the road, I applied the gas liberally and – wow. Instantly I was jolted back in my seat as the vehicle raced forward, growling all the way. I was only going about 30 mph at this point, but when you’re that low to the ground – you can touch the asphalt from the seated position – with nothing overhead, it feels a lot faster.

The road snaked downhill until it came to an area that looked like it was meant for big trucks to pick up gravel and dirt, so I turned around there. In doing so, I realized the thing had a tight turning circle and felt extremely stable – I never felt like I was in danger of losing control.

“It’s as wide as a Corvette,” Whaley said, explaining the stability.

After a few runs up and down that road, Tim gave it a go and was as blown away as I was.

Soon after we were done with the Slingshot, we got to try an off-road side-by-side, but Tim will tell you all about that on page 18.

In the end, this was one of the more thrilling experiences I’ve had, driving or otherwise. It made me totally bummed to get back into my boring old Nissan to continue the day, but it also made me think: Why would anyone who’s looking for a “fun” second vehicle go for something like a Miata, at about the same price, when they could get a Slingshot instead? I sure know which one I’d pick, if I ever make it to the stage in life where I’m looking for a second ride.

Thanks a ton, HK!