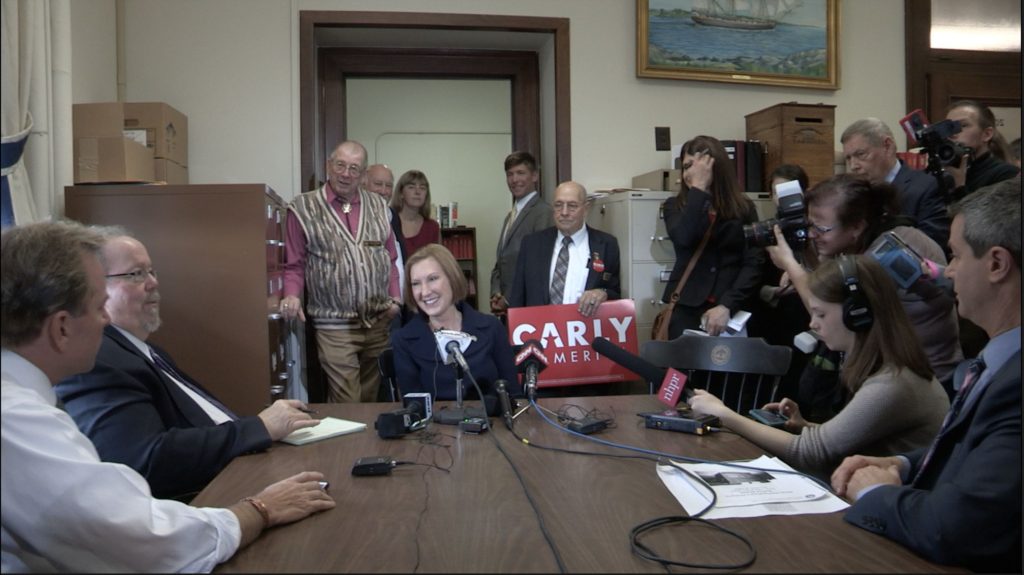 This scene from Democracy Through the Looking Glass shows presidential candidate Carly Fiorina fielding questions from New Hampshire reporters while campaigning leading up to the New Hampshire primary.(Courtesy of Kevin Bowe)

After what felt like the longest presidential campaign season in the history of the world – and the ensuing hyper-political atmosphere that has taken over the whole country since – it’s a good time for a break from all of that, right?

Not quite. After all, this is the Live Free or Die, first-in-the-nation primary state (and we’re in the capital) – it’s always time for politics.

That’s why you should get fired up to see a new documentary at Red River Theatres that’s all about the way the media reports on politics, with the New Hampshire primary as a jumping-off point.

Democracy Through the Looking Glass: Media & Politics in the Post-Truth Era will premiere at Red River on Friday, and the movie house will show it for a week.

“The movie is about our broken political information system, and there is no better place to document the interactions of the media, politicians and voters than in the New Hampshire primary,” said director Kevin Bowe.

As a filmmaker with a critical eye toward the media, we’re glad Bowe didn’t focus on any Insider journalists – not that he’d have anything to expose there or anything.

“The primary is a great laboratory to observe what the media decides is news based on how they cover the candidates and events. There certainly is a media bias, but not the kind most people think exists,” Bowe said.

It’s worth noting at this point that Bowe admitted he didn’t interview any New Hampshire journalists for this project.

“It wasn’t like, ‘This reporter did this or this media outlet did that,’ it was the system, the media system, as opposed to the individual reporters,” he said. “I wasn’t interviewing the reporters about why you did this and all that sort of stuff. I was covering anything, I was kind of covering pack journalism as opposed to individual things. No professional reputations were harmed during the filming of this movie.”

The movie first looks at the shortcomings of traditional media practices that often do not reflect the interests and concerns of voters, before examining the challenges that newspapers and other traditional media outlets face due to technology.

The first-ever showing will be 2 p.m. this Friday. For a complete list of show times, go to redrivertheatres.org.