How do they pick all that art for the show?

Home » Articles » How do they pick all that art for the show? 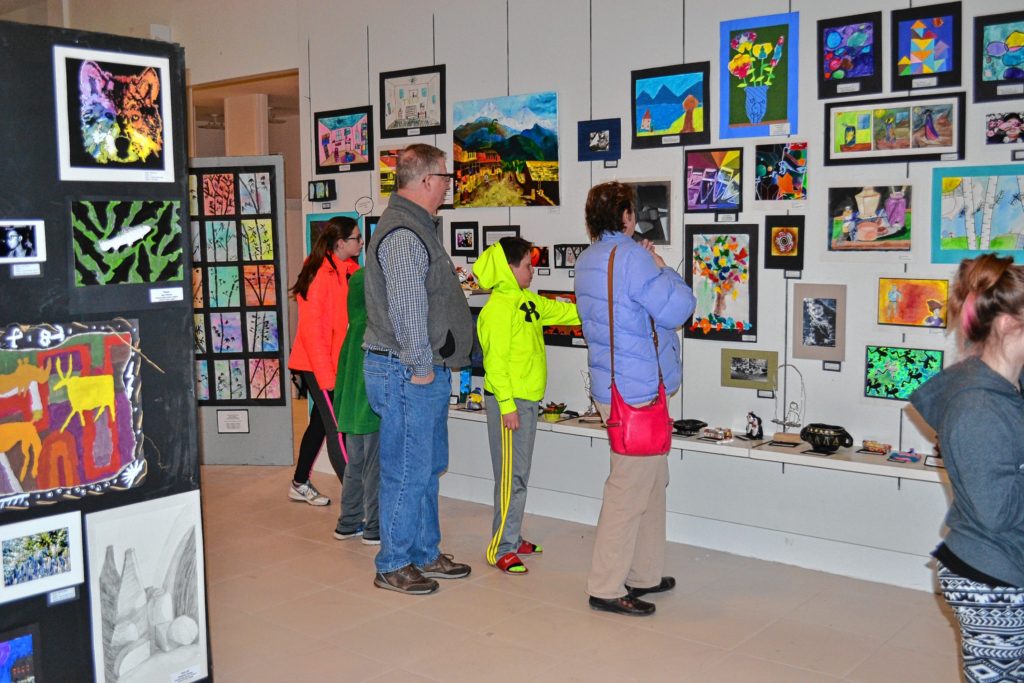 The sheer amount of work in the Concord School District’s annual Youth Art Month exhibit at Steeplegate Mall is staggering.

When you walk into the previously vacant location, it’s hard to decide how to see it all. Do you start by walking along the outside and scanning all the work on the walls? Do you scope out the partitions first and then hit up the walls? What about zig-zagging your way through it all with no rhyme or reason? And do you take a break midway through and do some shopping?

Now while you might think you have a tough decision, what about the art teachers who are given the difficult job of selecting all the work? Your plight doesn’t seem all that bad.

With more than 4,500 students enrolled in the district’s high school, middle school and five elementary schools, that’s a lot of students to choose from. Of course, not all of them have taken art yet this year, so the number is a little less, but an arduous task nonetheless.

The show features over 1,000 pieces, so as far back as last March (when the 2015-16 show ended), teachers have been stockpiling work from all their projects to help with their decisions. There’s no way they could remember it all if they didn’t.

Each level takes a different approach to the selection process.

At the high school, it really depends on the class. With a variety of mediums, like photography, ceramics and drawing (to name a few), they want to represent a little bit of everything.

“We try to pick a variety of work that’s a reflection of what we ask the students to do,” said teacher Shannon Riley-Martin.

And not only are they choosing work for this show, but also other ones throughout the school year.

Then there’s the creative aspect of it.

“You want to include kids that come up with a response to a project that’s outside the box,” said Concord High School teacher Erika Dietsch.

Through the first two quarters, each class has done multiple projects, so they really have to look closely at the work.

“We try to pick a variety of students to go along with the variety of work,” Bednaz said.

And there’s also the idea of rewarding a student for a certain piece of work.

“If it was a success for a kid or they worked really hard, I try to choose it,” Bednaz said. “Some kids who don’t shine in other things like English, gym class or sports, this is what they’re really good at.”

Nate Shartar-Howe, the art teacher at Abbott-Downing, is all about rewarding students who complete a project the right way.

“For the little kids, I try to look and make sure they accomplish the steps,” he said. “It’s all about the process.”

With about 380 students in the school, Shartar-Howe said he included work from about half of that number.

“The hard part is telling a student they didn’t get a piece in,” he said.

Although he encourages all students to see the show.

“They get to see what can happen with the arts throughout the years,” Shartar-Howe said.

Liz MacBride, who teaches at Christa McAuliffe School and has been a part of putting the show on for many years, doesn’t look at names when she decides on what to include.

“It’s what jumps out at you,” MacBride said. “It can be inside the box or outside the box, it’s really about what grabs your attention.”

Some of the work follows the instructions to the letter, while others use it as a way to express an individual idea.

“I think this show is such a wonderful opportunity to see how important art is,” MacBride said.

The show will be up through March 29 and is open during mall hours.

And it’s definitely worth the price of admission – which is free.