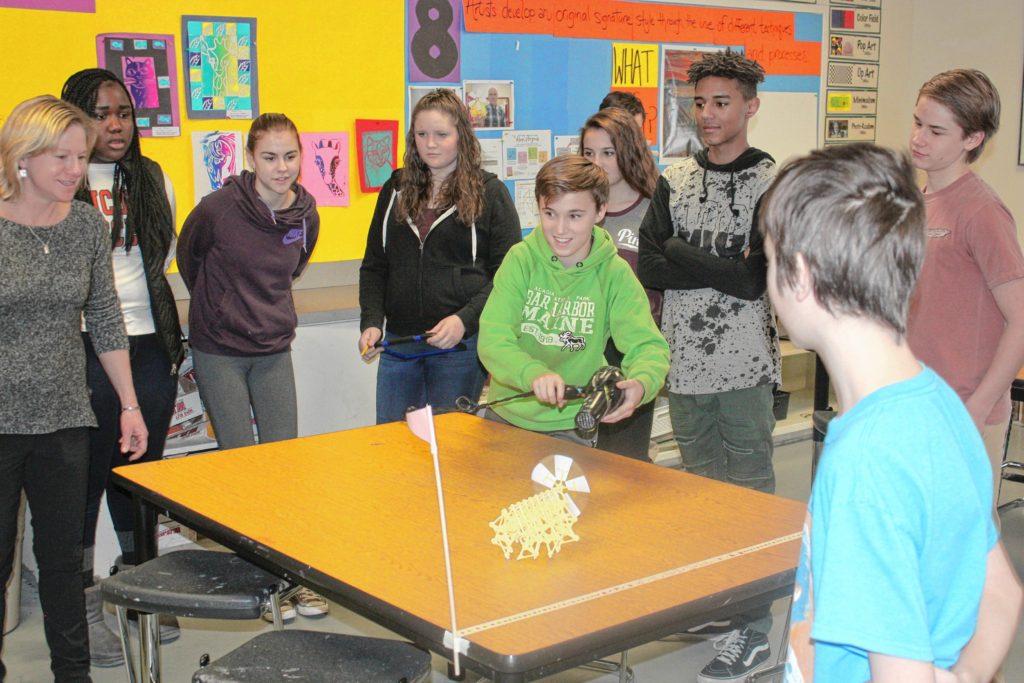 Cameron Detwiller (center) uses a hair dryer to power his Strandbeest while (from left) teacher Stephanie Bednaz, Rose Fornor, Lorelei Ford, Kathleen Shoemaker, Ava Corrente, Terrel Dixon, Nathaniel Bowers and Steven Martin look on during art class at Rundlett Middle School last week. The students spent the previous week or so building the Strandbeest, and this shot was taken during a race against another team of students.(JON BODELL / Insider staff) 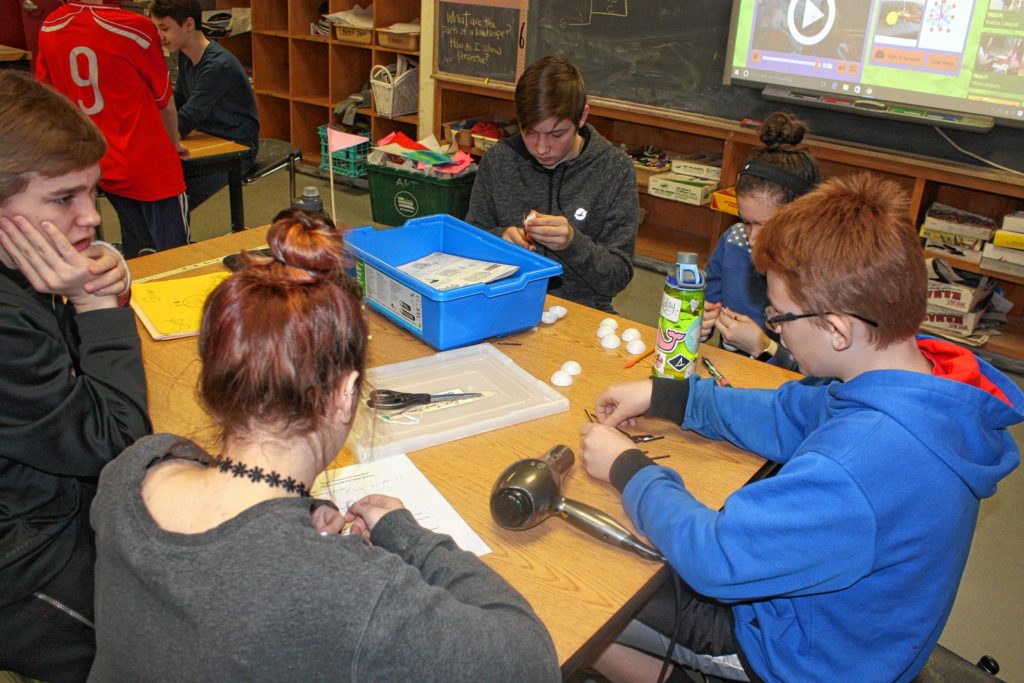 From left: Students Giovanni Carone, Saige Reed, Damien McRae, Emma Fleischman and Jonah Wachter work together on their Strandbeest project at Rundlett Middle School last week. Everybody had a different job all working toward the same goal, letting each student put his or her skills to use in the best way.(JON BODELL / Insider staff) 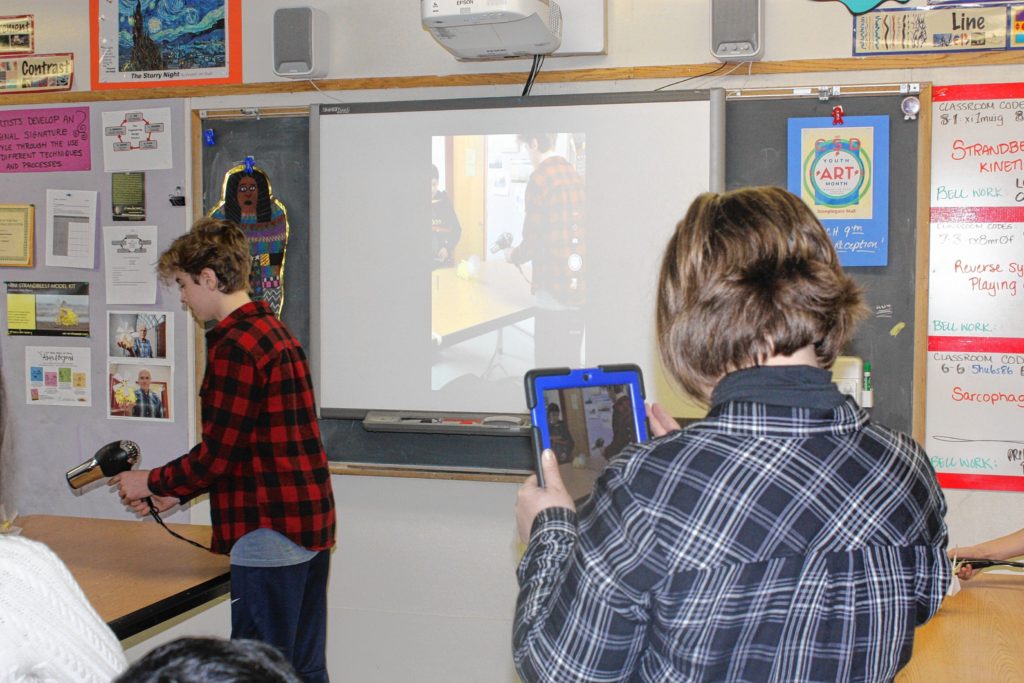 Teacher Kristine Nyhan uses her school-issued iPad to stream video of student Nicholas Richards using a hair dryer on his Strandbeest onto the projector screen at Rundlett Middle School last week. The teachers will occasionally take photos and videos of student projects to send to parents. (JON BODELL / Insider staff) 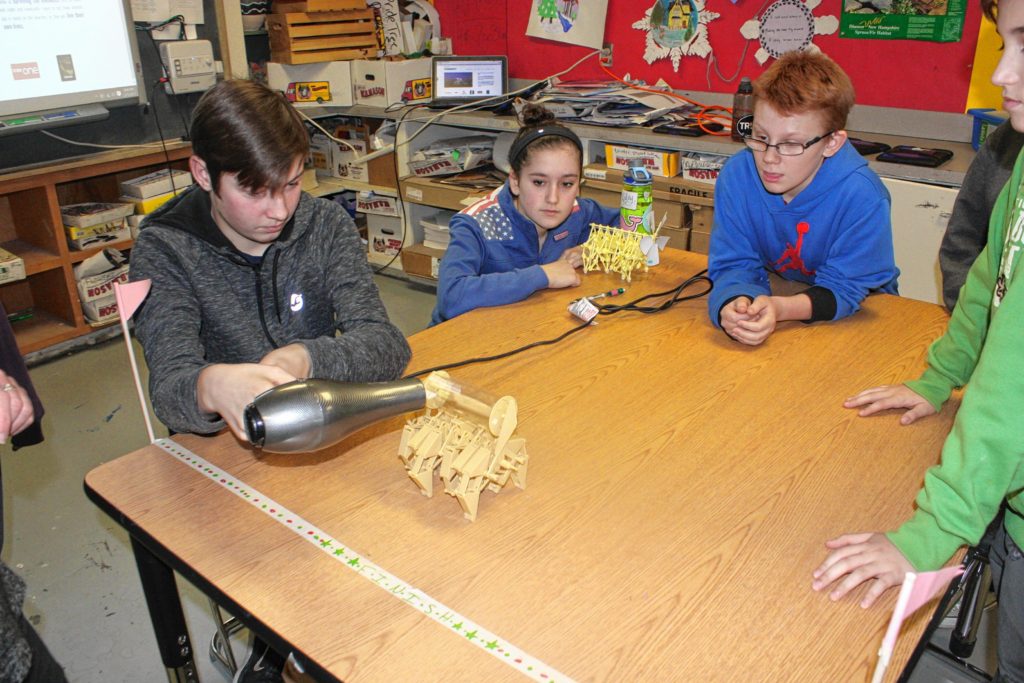 Students Jonah Wachter (left), Emma Fleischman and Damien McRae (right) check out a different Strandbeest model, this one a rhinoceros. There are two models of Strandbeest currently available for sale, and the eighth-grade art classes have all been working on the same one, called Animaris Ordis Parvus.(JON BODELL / Insider staff)

Do you remember any of your class projects from middle school?

Maybe you made rockets using soda bottles, baking soda and vinegar. Maybe you built a bridge out of popsicle sticks. Or perhaps you remember making paper mache sculptures of your own head, or something of the sort.

Well, the kids of today are up to a whole lot more than that, as evidenced by a quick visit to a pair of eighth-grade art classrooms at Rundlett Middle School last week.

All Concord schools have been pushing the STEAM subjects – science, technology, engineering, arts and mathematics (it’s the same subjects as STEM, only with arts added to the mix) – and the project we checked out could fall into almost any of those categories.

Thanks to a generous grant from the Concord Trust for the Enhancement of Public Education, students have been introduced to the art and engineering process of Dutch artist Theo Jansen.

Jansen is a visionary of sorts, spending his time since 1990 creating “new forms of life,” as he calls them, known as Strandbeests. These things are made of plastic tubing, and they use the power of the wind to move around similar to the way some animals do – there are loads of videos on his website, strandbeest.com, and it’s pretty wild to watch these Strandbeests move.

The ones Jansen makes are quite big – some the size of a bus – so the students at Rundlett set out to make scaled-down versions of these exotic creations using kits that can be ordered online.

When we stopped by, the students were just getting to the fun part – racing.

They had already spent a few days working in small groups to assemble the models – everybody was using the same model, one of a Strandbeest called Animaris Ordis Parvus. Now that every group had a complete model, it was time to put them up against each other in a little tournament.

The Strandbeest model had a propeller on one end, and students used a hair dryer to power it. As the rotor turned, it twisted an elastic which controlled the “legs” of the creature, making it walk in a mechanical, robotic manner. The things look really bizarre in action, I have to say.

Meanwhile, art teacher Kristine Nyhan, who’s classroom abuts Bednaz’s, was recording some of her students with a school-issued iPad. She live-streamed video of students hair-drying their Strandbeests, and even took some still shots to show parents.

As the Strandbeests raced, students were analyzing why their creations either worked or didn’t – most did work fine, though some had a few little quirks. They also talked among themselves about ways to improve upon their designs.

“We try to use everyone’s skills at the table,” said art teacher Stephanie Bednaz. “It’s really a lesson in working together.”

The point of the students working in groups, she explained, is to maximize each student’s potential. While some kids work best with a hands-on approach, some prefer to be left to their own devices. In these groups, every student can let his or her individual strength shine, and it all contributes to the same goal.

If this sounds more like a science or math project than an art one, that’s because it kind of is a mix of all of them, and then some.

“The project could really fit into many subjects,” Bednaz said.

The artistic phase of the project is the next one on the docket.

Now that students have built models using supplied materials and instructions, their next task is designing and building their own. They’ll use materials like ping pong balls, straws, glue sticks, cups and wires to see what kinds of creations they can come up with.

And it won’t just be the students in Bednaz and Nyhan’s classes.

“By the end of March, all six eighth-grade classes will have done this,” Bednaz said.

In the meantime, it will be a lot of brainstorming and collaborating, revisions and improvements, trial and error. One of the major purposes of the project, Bednaz said, is to teach kids about revision – when you think you’ve made it as good as it can be, go back again and try to make it even better.

When the time comes to put the original creations to the test, the fun part will be seeing what kinds of designs the kids came up with. The kinetic sculptures, as they’re called, do not have to “walk” or “crawl” around the way Jansen’s Strandbeests do, but they do have to move in some way or another.

No matter what the final designs end up looking like, one thing will be certain: they will be completely original creations, and they’ll be interesting for sure.