Mike Wagner: Men can get breast cancer, too

Home » Articles » Mike Wagner: Men can get breast cancer, too 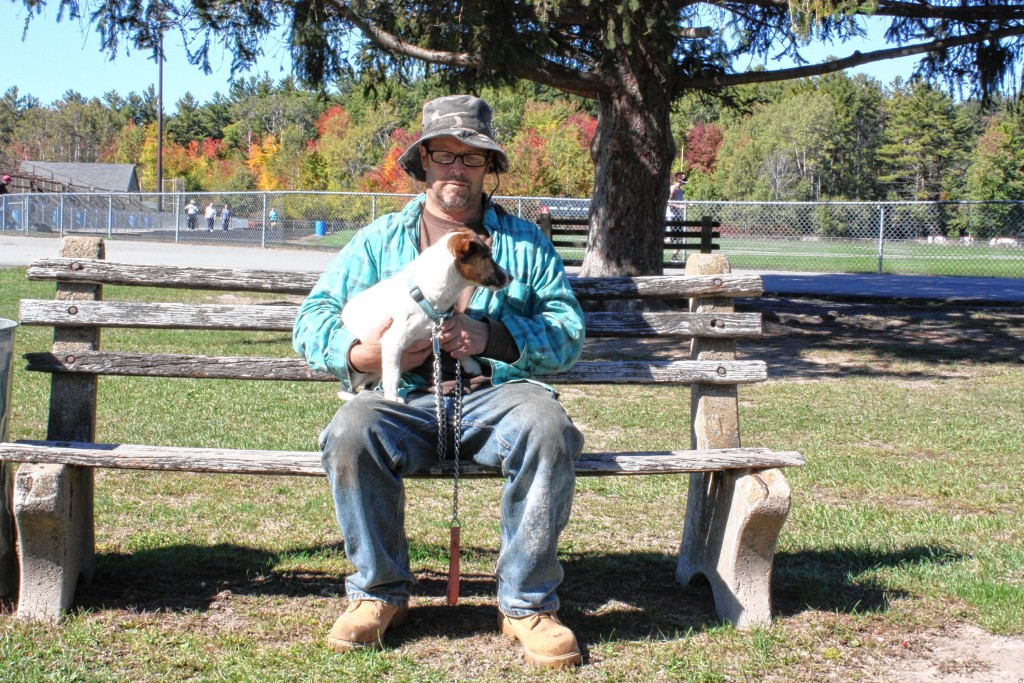 JON BODELL / Insider staffMike Wagner sits with his dog Buster at Memorial Field in Concord last week. Wagner was diagnosed with breast cancer in 2014, and he said he wouldn't have even known if not for Buster, who smelled the tumor and wouldn't leave Wagner alone until he got it taken care of.

The color pink is synonymous with breast cancer awareness. Most people instinctively think of women when they think of breast cancer, but the disease knows no gender boundaries.

Although rare – breast cancer is about 100 times less common among men than women, according to the American Cancer Society – an estimated 2,600 men will be diagnosed in the U.S. in 2016, and about 440 will die of it.

One of the problems, according to the ACS, is that men are more likely than women to ignore warning signs and prolong treatment. Just ask Mike Wagner about that.

Wagner, of Deering, was just an ordinary logger who loved his dog, when one day that dog – Buster – noticed something.

“I was laying in bed with no shirt on and he started nudging my chest and he laid his head on it,” Wagner said. “And I found there was a lump there.”

Back then – the spring of 2014 – Wagner didn’t know men could even get breast cancer. That’s why he originally didn’t think much of the lump.

A few months went by, and Wagner just continued to carry on like he always had. He was a self-employed logger who did things the old-fashioned way, and it was what he knew and loved.

And then something happened.

“I was pulling wood in a truck and every time I moved my arm I could feel in my chest that something didn’t feel right,” he said. “I could start feeling it.”

Still never thinking anything serious, he went to the doctor to get it checked out. That’s when he was referred to Catholic Medical Center’s Breast Cancer Center, and he realized maybe it was serious after all.

“They did a biopsy, and it was cancer,” Wagner said.

Hearing the news, he responded the only way he knew how.

“I just said, ‘I gotta get through this,’ and that’s what I’ve done to this point anyway.”

Wagner met Dr. Connie Campbell, who would perform the surgery to remove the cancerous tumor from his chest. They would have to act fast – if left untreated for much longer, the cancer could have spread to his bones or brain.

“From diagnosis to surgery, it was about two weeks,” Wagner said. “During the surgery, they found that it had spread to my lymph nodes, and that required five months of chemotherapy and six months of radiation.”

Those next several months would be tough for Wagner, but he knew he would have to battle through.

“The radiation was pretty much a cake walk compared to the chemo,” he said. “That stuff, it basically kills you. It kills your insides then it brings you back.”

His own cancer diagnosis was not the first he experienced in his family. In a way, he was eerily used to cancer by this point in his life, and it played a role in the way he dealt with his.

“My mother is a cancer survivor of 20 some-odd years,” he said. “My real dad died of it – he was a stock broker in New York City – other grandparents have died of it as well. I didn’t feel sorry for myself, I just continued on with life.”

As positive and strong-willed as we was, he admits he may have overdone it a tad in the beginning.

“The day after the surgery, my surgeon called to check on me and I was up on the roof shoveling snow off the roof,” Wagner said. “The surgeon was not impressed with me.”

Wagner said he’s not trying to impress anyone or become a big-time activist, he just wants men who have this cancer to understand that there’s no reason to hide.

“Men do get this, and it’s nothing to be ashamed of,” he said.

Wagner is looking good now – he has some routine check-ins planned in the future, but his last official treatment was Oct. 2, 2015. He credits two specific people – or, two entities.

“My dog caught it – had he not it would have spread to my bones, brain.”

And on the human side?

“My surgeon is a wonderful woman and she really is my savior,” he said. “If it wasn’t for her, I probably wouldn’t have made it through all this, and that’s no joke.”

Wagner organized his own team for Concord’s Making Strides Walk – Mike’s Pink Ladies – featuring 15 women and himself. But Buster?

“I’d like to take him, but there’s a lot of people there and he might be nervous.”

Here’s hoping Buster can find some of that courage his owner has so much of.