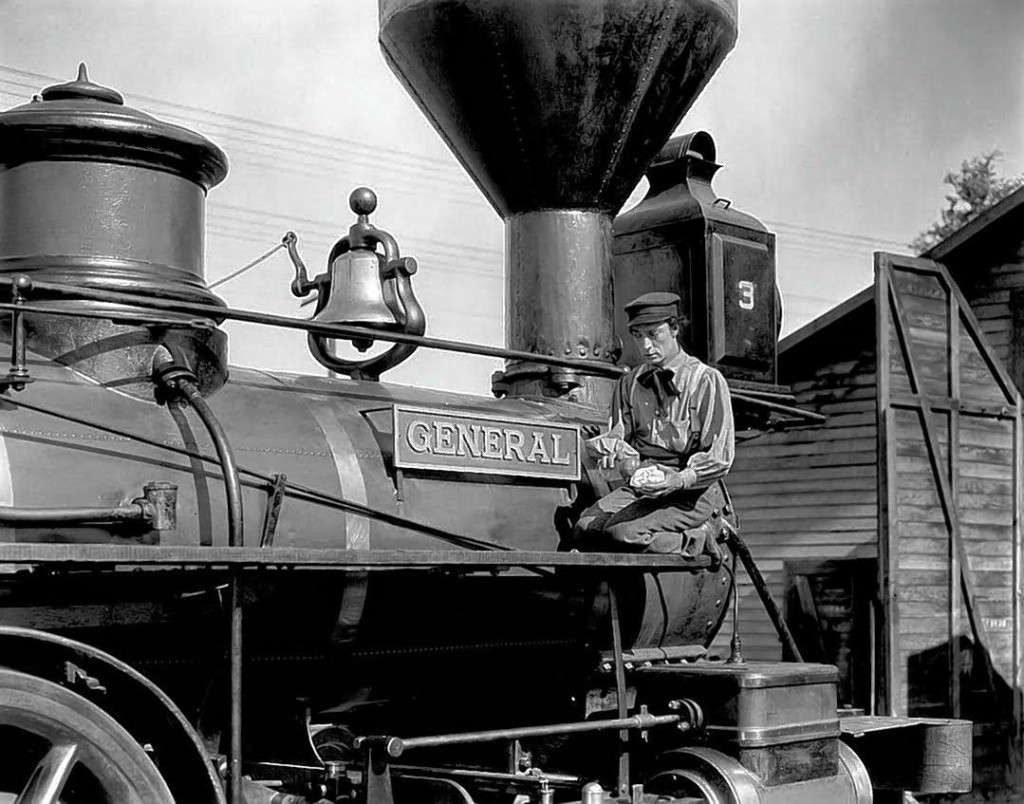 You’ll see this scene and others from Buster Keaton's 'The General' on Friday at Red River. (Courtesy)

He never smiled on camera, earning him the nickname of “the Great Stone Face.” But Buster Keaton’s comedies rocked Hollywood’s silent era with laughter throughout the 1920s.

The program will be accompanied by live music performed by silent film composer Jeff Rapsis.

The General, set during the U.S. Civil War, tells the story of a southern locomotive engineer (Keaton) whose engine (named The General) is hijacked by Northern spies with his girlfriend onboard.

Keaton, stealing another train, races north in pursuit behind enemy lines. Can he rescue his girl? And can he steal his locomotive and make it back to warn of a coming Northern attack?

It’s also regarded as one of Hollywood’s great train films, with much of the action occurring on or around moving steam locomotives.

Rapsis, a New Hampshire-based silent film musician who has accompanied shows at venues across New England, said Keaton’s films were not made to be shown on television or viewed at home.

In screening The General, Red River will give the public a chance to experience silent film as it was meant to be seen – in a high quality print, on a large screen, with live music, and with an audience.

“All those elements are important parts of the silent film experience,” said Rapsis, who improvises the score on the spot as a film screens. “Recreate those conditions, and the classics of early Hollywood leap back to life in ways that can still move audiences today.”

Rapsis performs on a digital keyboard that reproduces the texture of the full orchestra and creates a traditional “movie score” sound.

Keaton, along with Charlie Chaplin and Harold Lloyd, stand today as one of the silent screen’s three great clowns. Some critics regard Keaton as the best of all; Roger Ebert wrote in 2002 that “in an extraordinary period from 1920 to 1929, (Keaton) worked without interruption on a series of films that make him, arguably, the greatest actor-director in the history of the movies.”

As a performer, Keaton was uniquely suited to the demands of silent comedy. Born in 1895, he made his stage debut as a toddler, joining his family’s knockabout vaudeville act and learning to take falls and do acrobatic stunts at an early age.

A remarkable pantomime artist, Keaton naturally used his whole body to communicate emotions from sadness to surprise. And in an era with no post-production special effects, Keaton’s acrobatic talents enabled him to perform all his own stunts.

The General is the latest in an monthly series of great silent films with live music at Red River. Upcoming programs include:

For more information about the music, visit jeffrapsis.com.