Jon lit up the scoreboard at the NHTI Wheelchair Basketball Benefit

Two baskets counts as lighting it up, right? 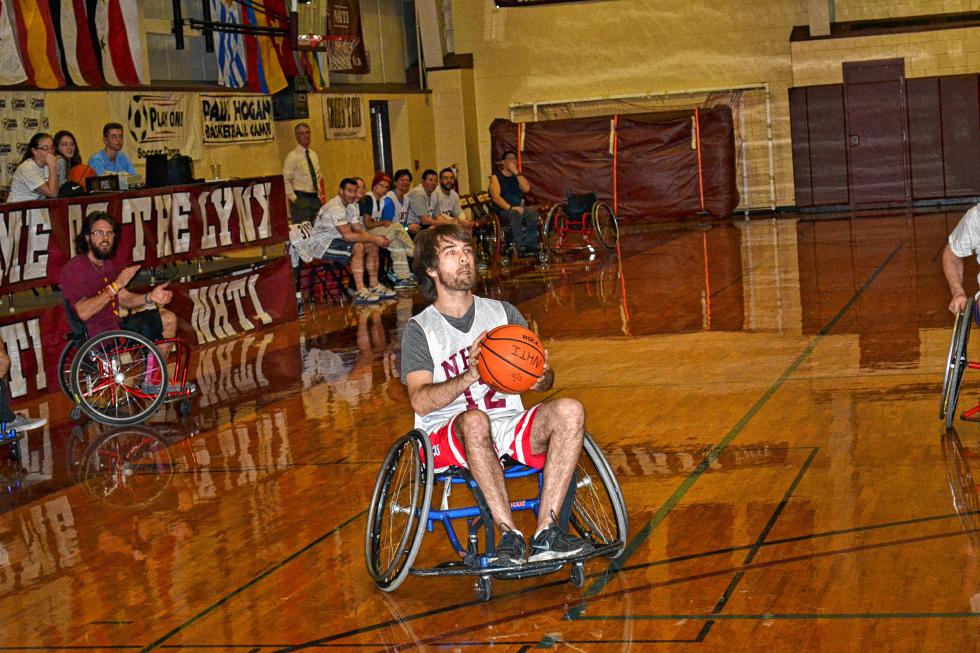 Jon sets up for a mid-range jumper during the NHTI wheelchair basketball game last week. Well, it wasn't exactly a jumper, but you get the idea. (TIM GOODWIN / Insider staff)

Using those wheels to win the race to a loose ball. (TIM GOODWIN / Insider staff)

Jon does a little show-boating after scoring his second basket in the NHTI wheelchair basketball game. He doubled the scoring output Tim managed lsat year, just so you know. (TIM GOODWIN / Insider staff)

During the middle of winter, it’s not as easy to stay active and have fun as it is in the warmer months. My days are often spent entirely indoors, with little to no physical activity whatsoever.

But last week I had the chance to get a good, fun workout in at NHTI’s 14th annual Wheelchair Basketball Benefit.

The wheelchair basketball game, which features a team of NHTI staff and a team of students, is a fundraiser for the NHTI Student Senate to help purchase assistive technology for students with disabilities.

The inspiration is Zech DeVits, who died at age 22 in 2005, just weeks before graduating from NHTI with an associate degree in addiction counseling. Born with gigantism, a rare genetic condition, and skeletal dysplasia, DeVits had used a wheelchair since age 6.

Apart from the game, which requested a donation for admission, there was also a 50/50 raffle and silent auction.

But the game itself was the big star of the whole thing, and I was lucky enough to play on the NHTI faculty team – where you might say I, too, was also a star. We’ll get to that later though.

I had never played wheelchair basketball before, and really had never even been in a wheelchair before, either. No surprise, then, that I was both a bit nervous and intimidated going in.

When I first walked into the Goldie Crocker Wellness Center, everybody was already warming up. Seeing the ease with which these guys and girls maneuvered their chairs was both intimidating and reassuring. On one hand, it looked like these people were all pros, zipping and spinning around the floor like it was nothing. On the other hand, I thought that if they can do it, so could I.

For the record, nobody who played in this game last week, as far as I know, uses a wheelchair in life.

So I walked over to my bench and checked out a selection of wheelchairs. These aren’t the kind you see at hospitals – these things are meant to flat-out move. The wheels are angled in and there’s a little wheeled rod in the back that prevents it from flipping over backwards, which was extremely necessary and useful.

Once I found a chair that fit me pretty well, I spent a few minutes just figuring out how to handle it. The controls are pretty basic – push the left wheel forward to turn right and vice versa, turn the wheels in opposite directions to spin around in place. The tricky part was coordinating these movements with the ones needed for playing basketball – something thing I’ve only done once in my life (and we won’t speak of that time here).

After about 15 minutes of wheeling and shooting around, I had gotten the hang of it enough to feel confident about playing. I didn’t start the game, as I wanted to watch how it all played out for a few minutes before getting right out there. After all, a lot of these people take the thing pretty seriously, and I didn’t want to make a fool of myself in the opening minutes.

And once I got into the game, shockingly, I didn’t completely embarrass myself. I was no pro, though.

Dribbling was not my strong point. The rule is you get three pushes of your wheels per each bounce of the ball, but I couldn’t get myself to not dribble it the whole time I was moving with it. The result was a couple fairly clunky, drawn-out dribbles leading to forced, errant passes.

It’s tough to work out the physics of throwing a big ball while seated in a rolling chair. At one point I wanted to make a pretty long pass, but it didn’t come close to making it there because when I released, I kind of rolled back a little bit, losing important energy in the transaction.

It was a pretty similar deal for shooting. Besides the obvious height disadvantage you’re at while seated versus standing, it’s hard to get much power behind anything without being able to bend your knees or jump. Needless to say, there were no three-pointers scored in this one, though that didn’t stop a few ambitious students and staffers from attempting some.

I preferred to play a close game. I didn’t take a shot from farther than about 10 feet away, and that was plenty far for me. Not being a basketball player, I don’t have much of a shot to begin with, so I wasn’t about to try canning treys from a wheelchair.

After a few bricks and a turnover or two early, I decided to sit out the entire second quarter and let my teammates pick up some minutes. Plus, I was pretty winded and sweaty, so it was a good time for me to sit back and observe while recovering.

When I went back out for the third quarter, I found myself wishing I hadn’t taken the last quarter off. It seemed as though I had rested just long enough for a little bit of soreness to kick in.

My back and shoulders were fine – until a few hours later – it was just the inside joint of my right arm that was sore. It didn’t hurt, I could just feel that it wasn’t at full strength.

But the “injury” inspired me to dig deep and summon my inner beast. There was no way I would leave this game without registering something other than turnovers in the stat sheet.

After promptly firing an air ball early in the third quarter, I quickly made up for it with what I like to call a double assist: the guy I passed it to passed it to another guy, who scored. It might not actually show up in the box score, but it was a nice confidence booster, if nothing else.

And apparently it worked. Once I saw the ball fall through the net, knowing I had something to do with it, I felt like I could do anything out there.

Suddenly, I was Larry Bird on wheels.

In the fourth quarter, I really turned it on. Driving the lane on a fast break, I received a pass right on the numbers. Knowing that I couldn’t dribble to save my life, I just let the momentum carry me closer to the basket before letting it fly.

After about 13 bounces, rolls and wobbles on the rim, it finally fell through. I was officially in the books.

And just about a minute later, I was under the hoop again. This time I put up a one-handed floater-type of shot – in essence, all my shots were floaters, since I preferred to slowly roll toward the hoop while shooting. This one went down with less drama than the rattly first one.

So I finished with 4 points and a hockey assist, but the most important thing is that we won!

Thanks, NHTI! What a blast.