Want to connect with people all over the world? Try using a ham radio

Like The Sky is Not the Limit Radio Club

Home » Articles » Want to connect with people all over the world? Try using a ham radio 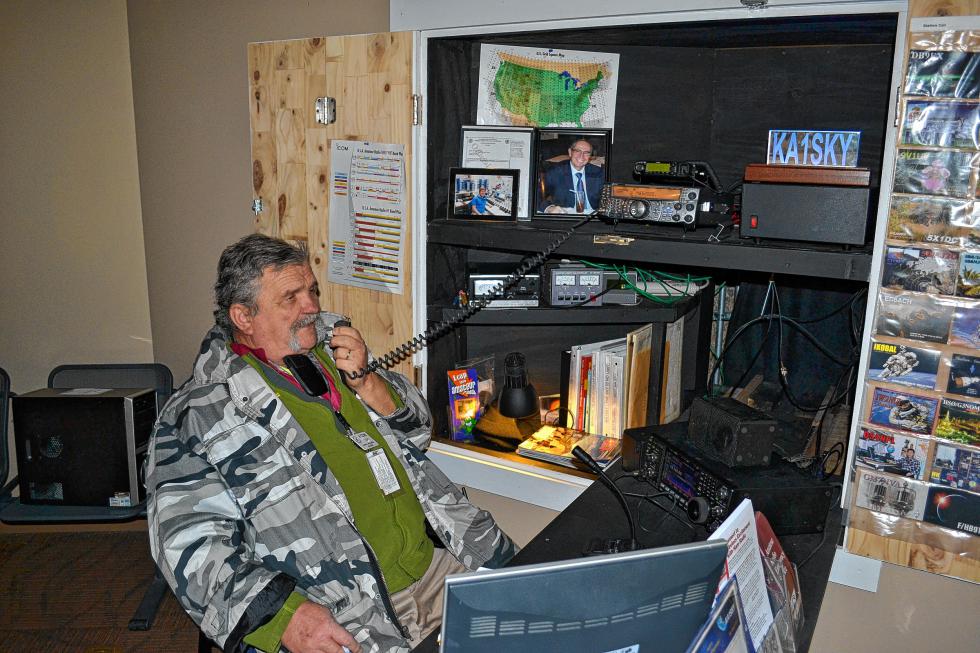 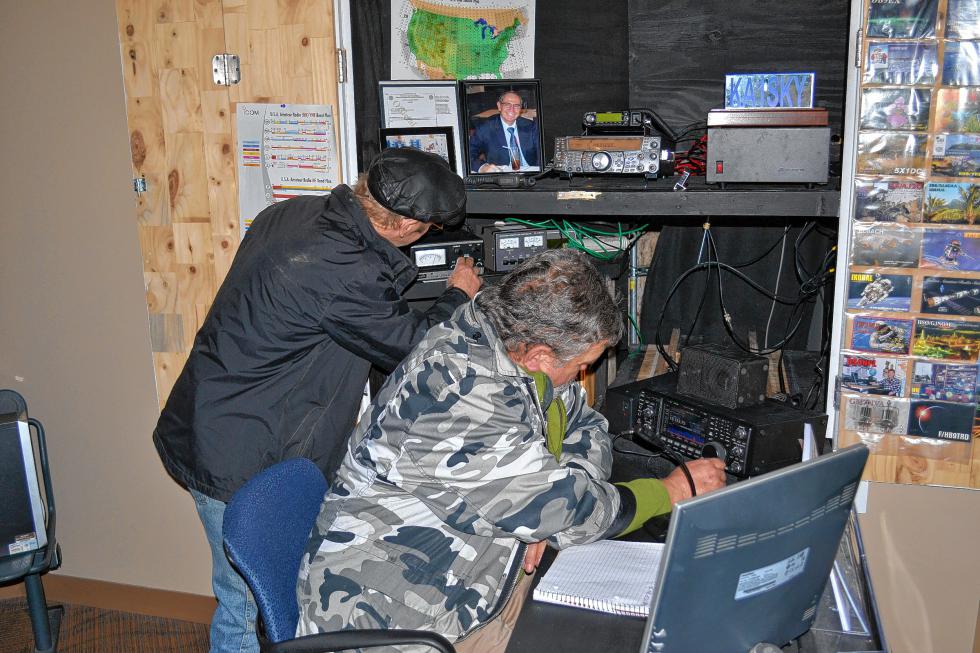 Frank Ross (left) and Don Curtis play with the controls at The Sky is Not the Limit Amateur Radio Club operation at the Discovery Center. (TIM GOODWIN / Insider staff) 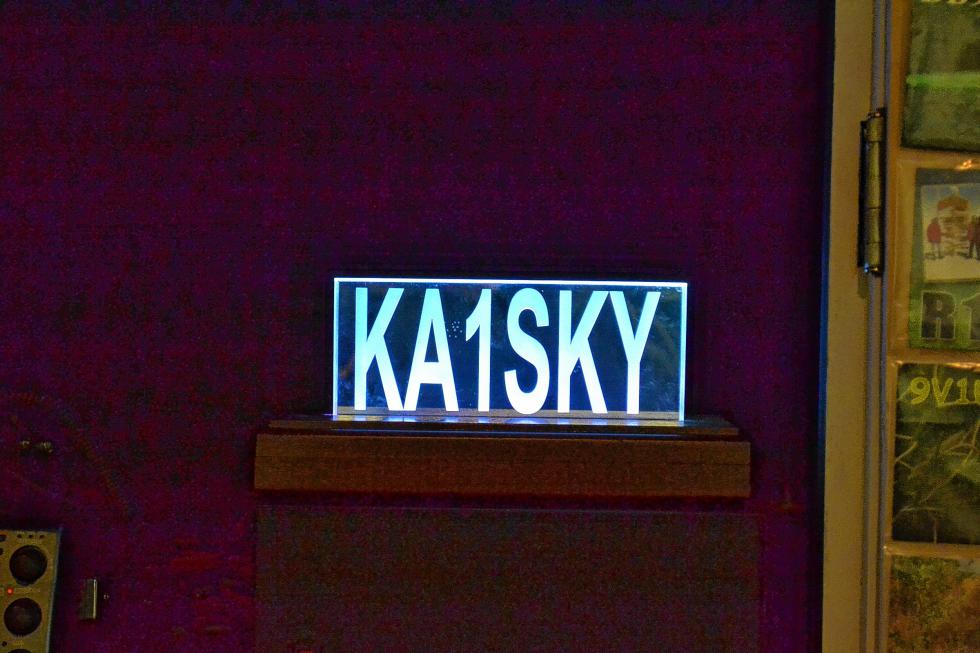 The offical call sign for The Sky is Not the Limit Amateur Radio Club. (TIM GOODWIN / Insider staff) 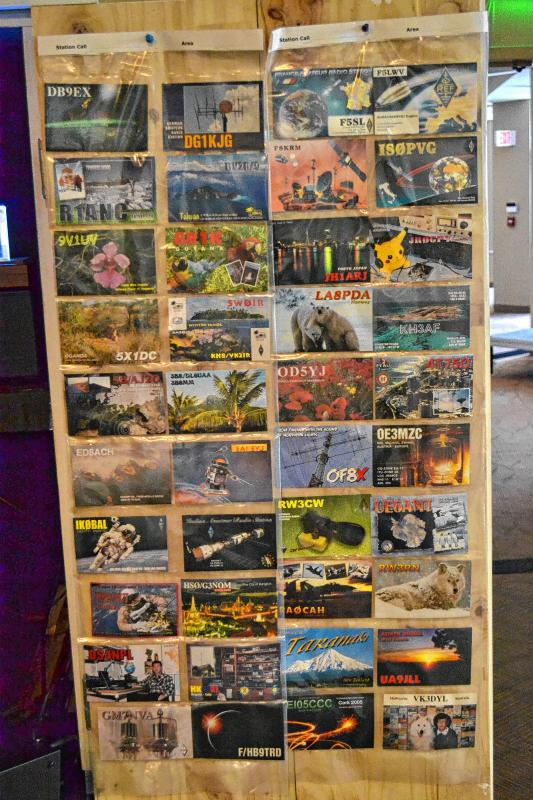 Some of the postcards the club has received. (TIM GOODWIN / Insider staff) 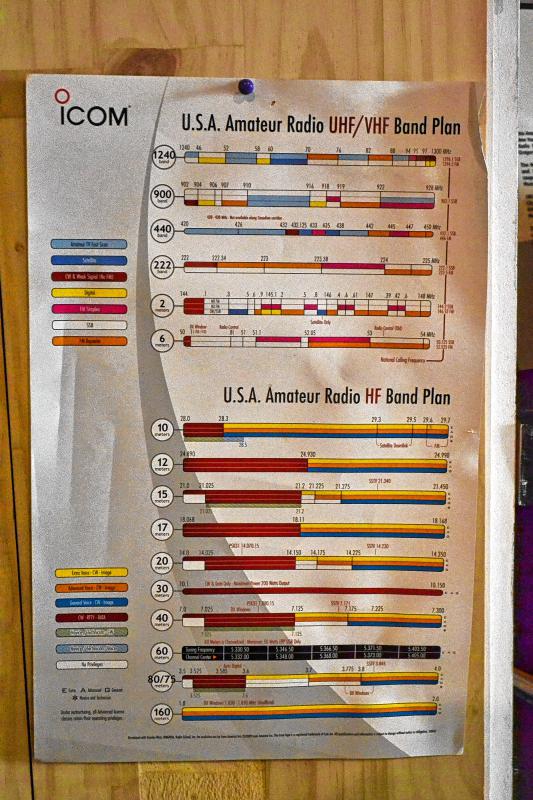 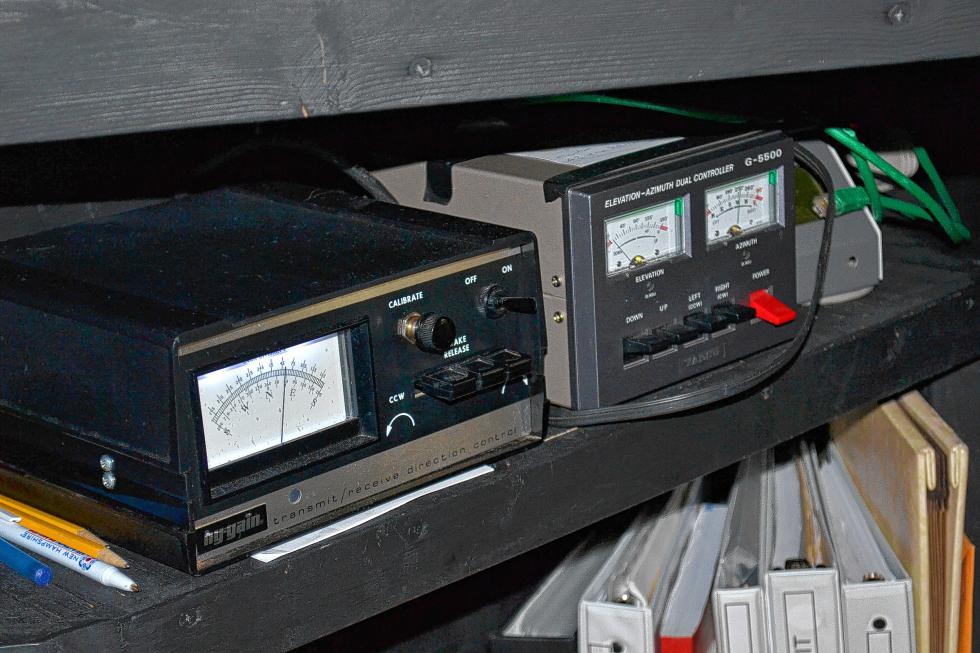 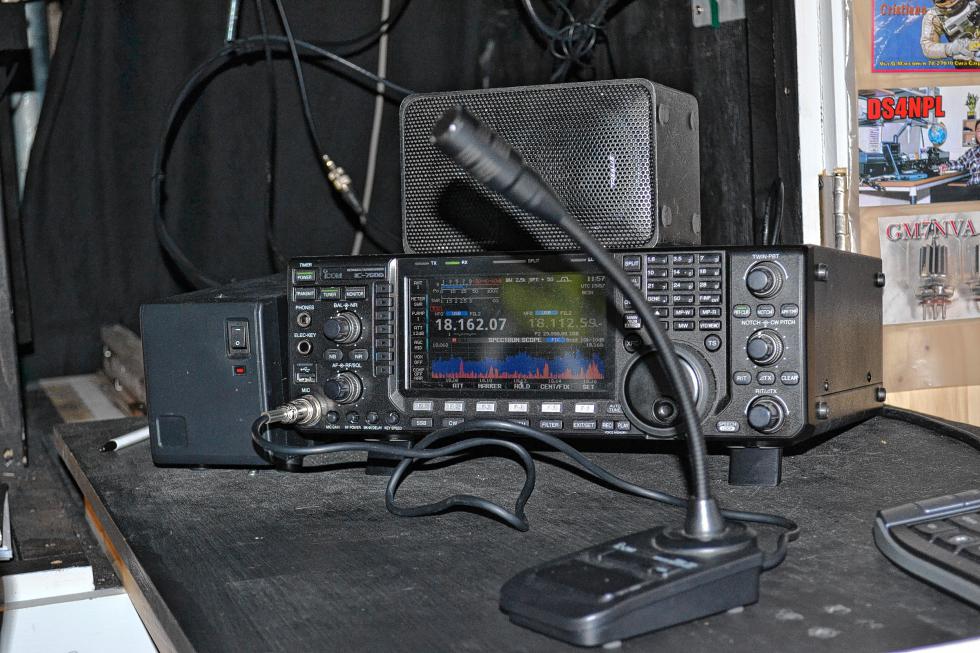 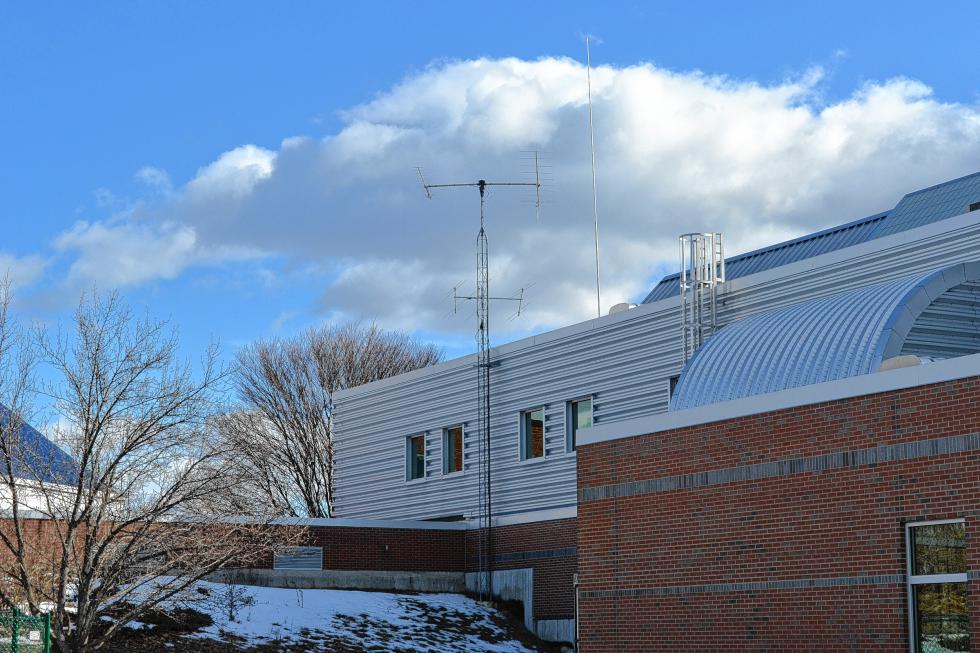 The antenna set up outside the Discovery Center. (TIM GOODWIN / Insider staff)

Those words strung together probably don’t mean a whole lot to you, but in the world of ham radio, that’s the call sign of The Sky is Not the Limit Amateur Radio Club at the McAuliffe-Shepard Discovery Center. It’s their way to connect with the rest of the world – and the way other amateur radio enthusiasts can identify who they’re speaking with. They use the phonetic alphabet because it’s recognized internationally – although some use different words for letters.

You see, every Friday morning, you’ll find a few members hanging out by the club’s desk and small wall closet in their little corner of the Discovery Center listening closely as their radios pick up people from countries all over the world – including some you’ve never even heard of. They have two radios connected to four antennas that if pointed in the right direction, will capture conversations from right around the corner in Concord to as far away as outer space.

What are they listening so closely for? We’re glad you asked, because that’s kind of the reason for our visit last week. They’re listening for CQ’s (which is the ham radio way of saying “seek you”) for a chance to strike up a conversation with someone that they otherwise never would.

A person on the other side of the radio, who could be in England, France or a tiny island in the middle of fill-in-the-blank ocean, will say CQ followed by their call sign. KA1SKY is the call sign for the club and is what they would use to respond, after repeating the call sign the just heard, to make a potential contact. Once a connection is made, they’ll respond with a report consisting of the strength of the signal and the quality of the audio, along with their location (which as you can guess is always the Discovery Center).

And then, if deemed that both parties wish to continue, some basic chatter ensues. Things like the weather and time of day (using universal time) are big talking points, but there are also conversation pieces that are universally stayed away from.

“We try not to get involved with political discussions, religious discussions,” Ross said.

Using the call sign, you can enter it into the qrz.com website for pictures of the station, the antennas they use and a map that shows their location.

Most conversations are brief because many times people in the ham radio world are just trying to see how many contacts they can make. With 340 entities officially listed, there’s a lot of people out there to connect with. And just to show you that’s a lot, the United States is considered one.

“There’s an award for contacting them all, but very few people do,” Ross said.

The club keeps a log of entities contacted with some being a lot cooler than others. A couple weeks ago, Ross spoke with a man driving in his car in Manchester, England, another from Germany and a third from the Balearic Islands off eastern Spain in the Mediterranean. That one ranked right up there for Ross, because before that talk he didn’t even know the Balearic Islands existed.

“That was a high point,” Ross said. “It was an exciting event.”

Don Curtis, a longtime member of the club, spoke with someone recently from Austral Island off the coast of Australia and even spoke with a gentleman from Moscow, who he admitted spoke better English than he.

“Anytime you can pick up an obscure island or countries that are far away is great,” said Curtis.

Someone from the club has even made direct contact with the International Space Station, which is pretty cool since they are located at the Discovery Center – you know the place in Concord dedicated to space.

Now you might be wondering how people from little old Concord can make contact with other ham radio enthusiasts from around the world? Well, it is required that all call signs be given in English, but from there any language is okay, which could be quite difficult if they speak Chinese and you don’t. But that’s just the chances you take in ham radio land.

Making any kind of contact is cool because on any given day at any given time, you never know what a search of the 16 bands might turn up.

“Sometimes there’s no one on and other days you can’t get a word in cause it’s so busy,” Ross said.

Although, when you hear a voice on the other end that you soon find out is living half way around the world, it’s something you can’t wait to enter into the log.

Over the years, Ross guessed members of the club have spoken with people from close to 150 entities – and each week is a quest to touch base with more.

But you should also know that all those contacts have come by hearing others on the airwaves. They actually don’t send out CQ’s because they’re just trying to see how many they can respond to.

“It’s easier to respond to someone else,” Curtis said.

You can also have your own personal call sign. Curtis’s is N1ZIH and Ross’s is N1FDR, which is a vanity call sign.

“I requested my initials,” Ross said.

You just have to renew it every 10 years for free. We know, talk about asking a lot.

Each entity has its own identifier. The United States uses A, K, N and W, while each region of the country is associated by a number, with 1 being New England.

And like with any technology, no day ever seems to be the same.

Both Ross and Curtis are also members of the Contoocook Valley Radio Club, which meets twice a month in Hopkinton, as well as the Capital Area Amateur Radio Emergency Service that meets the second Monday of the month at the American Red Cross (2 Maitland St.).

For more on the CRVC, visit k1bke.org and to connect with the Capital Area ARES, check out ca-ares.org.