There’s a new look to New Hampshire history, and it’s on the web

Who knew old stuff could look so cool?

Home » Articles » There’s a new look to New Hampshire history, and it’s on the web 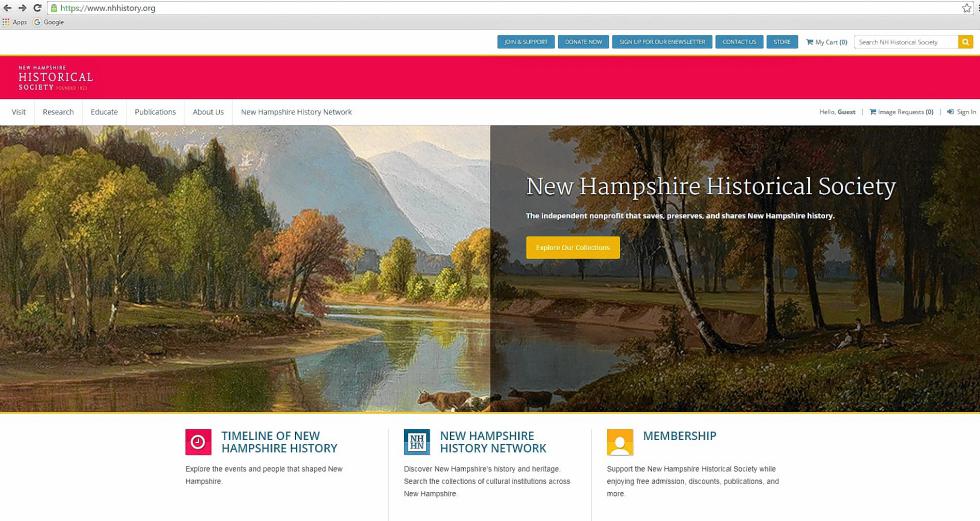 The very beginning of the N.H. timeline. 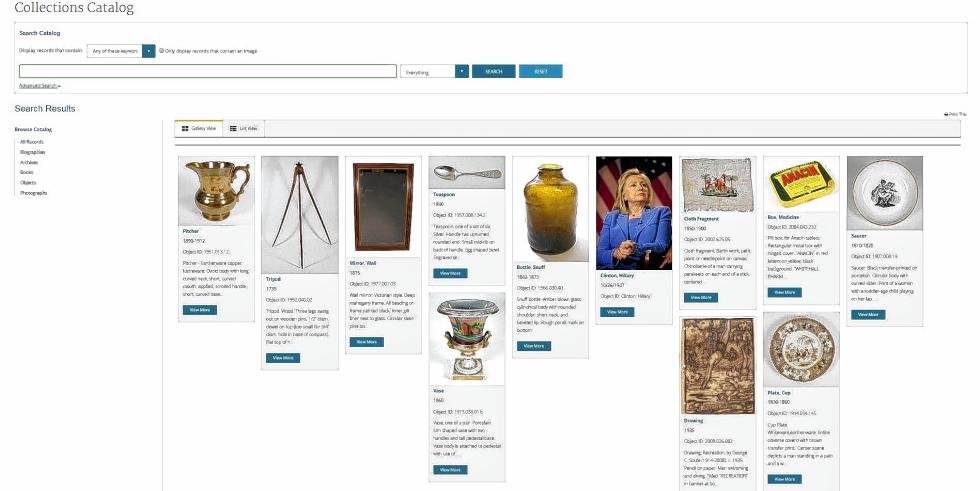 This what you’ll see when you open the collections catalog.

If you haven’t checked out the New Hampshire Historical Society’s website recently, it might be a good idea to take a quick gander.

We know what you’re thinking: “It’s history, how much can it possibly have changed?” Well, the answer is quite a bit – at least the way the website looks, functions and what’s on it after the society launched a brand new one a little over a week ago. The address is still the same (nhhistory.org), and there’s still the eye-catching red at the top, but the similarities stop there. After a capital campaign raised about $6.7 million, about one-third of that went toward the development of the new website and all the bells and whistles you’ll see if you didn’t already stop reading this story to pull it up on your computer. The rest of the money went toward an upgrade in the society’s climate control system (which we wrote about in September) and its endowment.

For those who are mathematically inclined, that’s a little over $2 million toward this project, so yeah you’re going to see some pretty cool stuff. Some of that money also went into the creation of the N.H. History Network, which will help connect you with the collections from historical societies around the state, but we’ll get to that a little later. First, things first, this new website is pretty cool.

When you get to the home page, either through typing in the address or using the Google machine, you’ll notice a picturesque view of cows near a river with a big yellow tab that says ‘Explore Our Collections.’

If you click on the tab, it brings you to the collections catalog. It’s here where you can see quite a bit of what the society has been collecting for close to 200 years. And it’s way more than you’d ever be able to see if you walked into the Park Street building and started wandering around.

Not everything the society owns is on there ’cause with roughly 33,000 museum objects, 25,000 photographs, 2 million manuscripts and 50,000 books, that would be quite a bit of work, and tedious as well. But since this project has been in the works for about three years and also included digitizing the collection, there has been a lot of planning and organizing that’s gone along with it – especially when you have all those historical pieces in your collection.

The development of the site only took about a year and a half, but cataloging and creating digital images for all that stuff you’ll see on the web was a huge undertaking. Sure, the historical society had pieces featured on its old website, but nothing even close to this.

“When you’ve been collecting for almost 200 years, it’s a lot,” Desmarais said.

When you first pop in to explore the collection, you get 12 randomly displayed images and descriptions. Each time you refresh, 12 more come up. You could probably sit there for hours doing so and even though it’s all stuff from a long time ago, seeing what popped up would never get old.

“To have an image associated with it was a big reason behind it all,” Desmarais said.

A good chunk of the stuff on the new website has a picture associated and you can search using keywords or by clicking on all records, biographies, archives, books, objects or photographs. Some of the old and what seem to be unreadable documents have even been transcribed. Depending on what you decide to search, you may get a few things to peruse or hundreds, like when you type in Abott-Downing.

There’s a timeline for New Hampshire history that includes 209 entries from 1603 to 2012. Each entry has a when and what, who, where, why and impact section, which for many are still being pulled together.

“People will now know what we have, and they can use it in their research,” Galligan said.

You can once again use keywords to find events or search by theme, topics and regions. And of course, the plan is to add more entries because there’s got to be more than 200 important things that have happened in New Hampshire. We might be a small state, but there’s plenty that’s gone on here.

And if you’re a member, like Robert Frost once was, there’s some added bonuses on the website just for you – and the other members as well.

“There are a few things that you need to be a member to enjoy,” Dunlap said.

Now for the lowdown on the N.H. History Network. It’s got a button on the N.H. Historical Society website, but also has it’s very own web address (network.nhhistory.org). Like the historical society’s website, you can search it for all kinds of cool objects and pictures and the neat thing is that the current searchable collection is from 10 city and town historical societies from around the state. Each one was allowed to put up to 100 pieces (although Strawberry Banke in Portsmouth added more than 300), to get the thing off the ground.

“It allows historical societies from around the state to share,” Dunlap said. “And this basically gives them a web presence they may not have had before.”

Everything on the history network has an image associated with it and the plan is to keep adding more cultural institutions and more great old things from around the state. Did you know there are more than 200 collectors of historical stuff in the state? Well there is and hopefully one day all of them will be a part of the N.H. History Network.

“This is really a way they can do all of their collections or some of them,” Desmarais said.

And the best part about it all, is that the websites are all integrated so no matter where you search, you’re going to find what you’re looking for.

“The way this works is really cutting edge,” Dunlap said.

For all those researchers who just can’t find the time to make the trip to Concord, especially if they live out of state, it’s probably safe to assume they’ll be big fans.

“There are lots of people who don’t live in New Hampshire, but are researching,” Desmarais said. “That’s what’s so great about it, you don’t have to be here to enjoy it.”

And since the climate control upgrade also recently finished, the society figured why not do everything at once and also opened it’s new exhibit “Discovering New Hampshire.”

So when you’ve got some time, go check it out. Just be ready to see and learn a whole bunch of stuff.