Pedro Pimentel made another movie and it will be at SNOB

‘The Priest’ is showing Saturday and Sunday 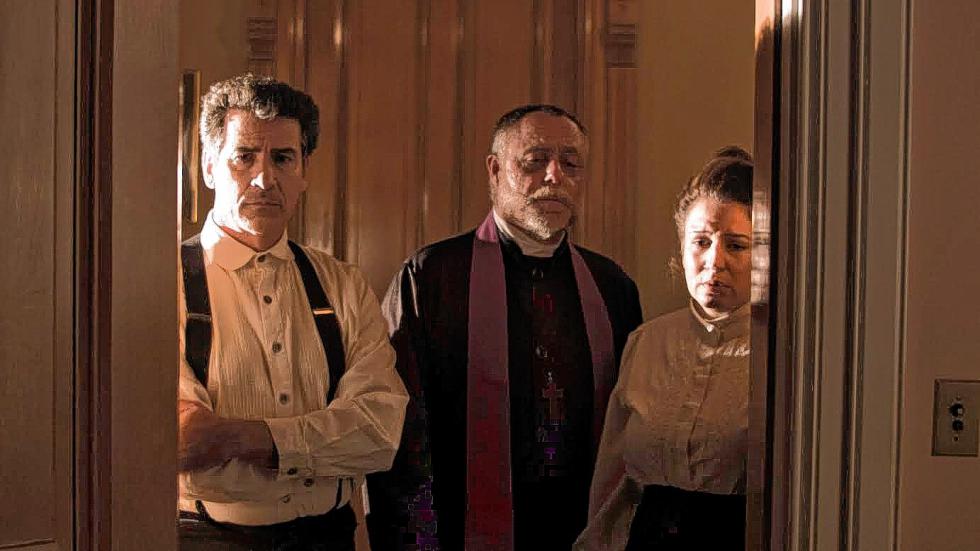 “The Priest” stars Michael Anthony Coppola as Joseph, Craig Capone as the priest and Mary C. Ferrara as Mary. It was written and directed by Concord’s Pedro Pimentel. 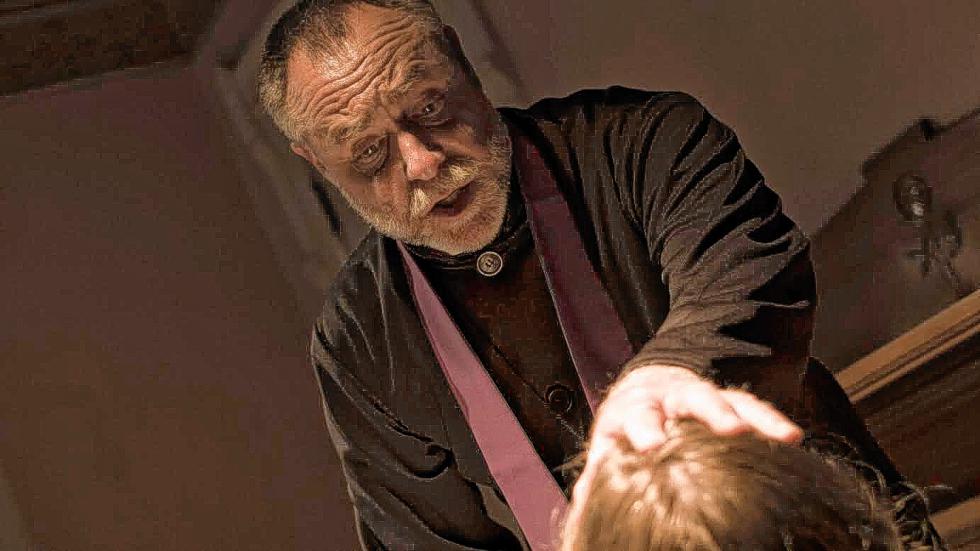 Craig Capone as “The Priest.” 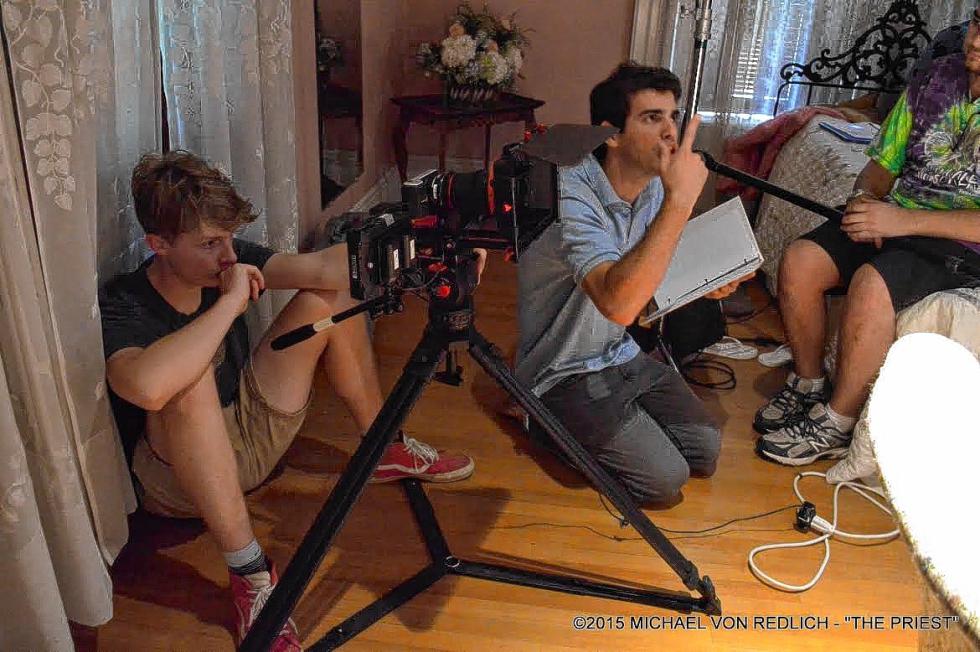 We can only imagine Pimentel is giving an inspiring speech. (MICHAEL VON REDLICH / For the Insider)

We can only imagine Pimentel is giving an inspiring speech. (MICHAEL VON REDLICH / For the Insider) 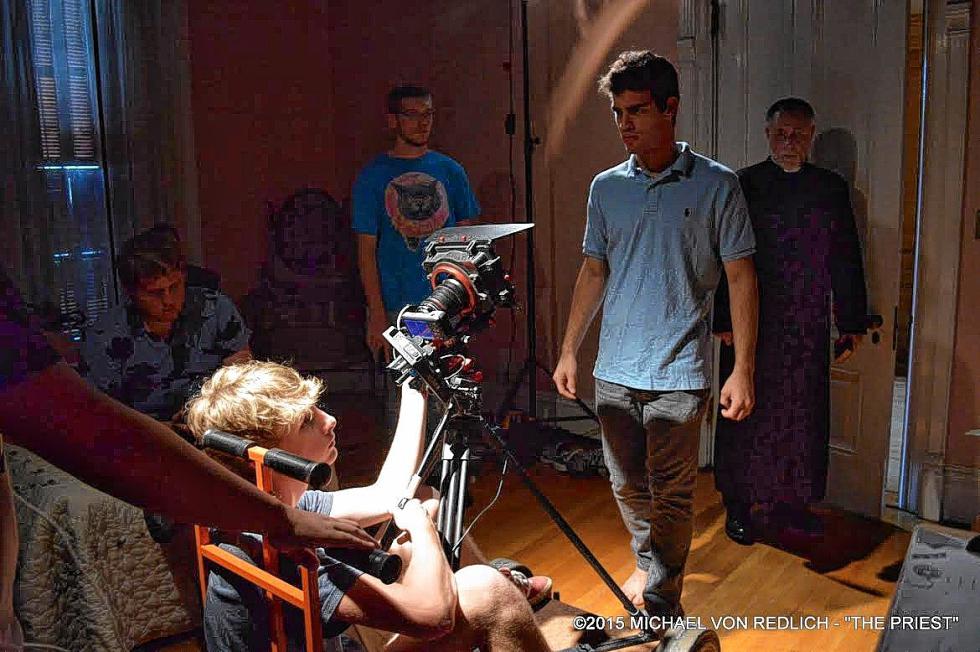 When Pedro Pimentel began writing the screenplay to The Priest, he pictured it taking place in Concord.

So it’s only right that it was shot entirely at the Kimball-Jenkins Estate, made its world premiere at Red River Theatres and will make its film festival debut at the Somewhat North of Boston Film Festival this weekend.

You may remember Pimentel from his days as the president of the Concord High School Film Society or the previous two SNOB’s where he screened The Beauty of the World and Accursed.

But Pimentel has grown a lot as a film maker since those days – just go watch The Priest this weekend and you’ll see. The films he’s entered into SNOB before have been made with his friends doing the acting and helping with the production work. That wasn’t the case with his latest flick.

“I wanted to do something a little more challenging,” Pimentel said.

Pimentel wants to make a career out of this whole movie making thing, so he figured why not give this a professional feel. He had a $2,500 budget, which is way more than any of his previous films and not counting some extra cash he tossed in. He used professional actors, and he can’t even count the number of times he rewrote the script to make sure it was just right. He even did a rewrite after holding auditions.

“I wanted to work with people I had never worked with,” Pimentel said. “And it was the biggest production I’ve done.”

The Priest, which has a running time of about 16 minutes, is an exorcism type film that takes place in the late 1800s. It’s about the McWilliams family, Joseph, the father, Mary, the mother, and their daughter. The daughter falls ill and the parents seek the guidance of their priest. What happens next is what you’ll find out if you decide to go see it during a block of short films at 4:30 p.m. on Saturday at Red River. But don’t worry if your Saturday is full already, The Priest will be shown again Sunday, when the festival dedicates a big block of time to films made in New Hampshire, starting at 1:30 p.m.

“This movie is meant to be seen at a movie theater,” Pimentel said. “I’m really excited to see what people think. We had a lot of people at the edge of their seats at the premiere.”

Pimentel came up with the idea back in February. And just like if you asked any film maker, the final product is not what the original screenplay looked like.

“It’s completely different than when I started writing it,” he said.

The auditions were held in late spring and it was there that Pimentel cast the priest and daughter.

“When they walked in I said, ‘They’ve got to have the part.’ ” Pimentel said. “They just looked like them.”

Craig Capone is the priest and Isabella Rose Coulombe plays the role of the daughter. But he didn’t have any luck casting Joseph or Mary. Pimentel had seen Michael Anthony Coppola’s work at previous SNOB Film Festivals and decided to contact him. Coppola said yes and he found Mary C. Ferrara on a website dedicated to New England based actors/actresses and decided to send her the script. Ferrera also said yes and Pimentel had his cast of four.

The Priest was supposed to be shot over two very long days in July – like 12 to 16 hour days – but like any movie making experience, things didn’t quite go to plan.

Like when they set off the Kimby Jenks fire alarm one day, requiring a visit from the Concord Fire Department, because of the fog machine.

But because of schedules, they couldn’t get everyone back together until early September. And that left very little time to meet not only the deadline for SNOB, but also the submission date for Sundance.

So over the course of a week and a half, Pimentel worked every waking hour to finish.

“I would get home from work and start working,” Pimentel said.

And during the post production work, he realized there was one other scene that didn’t get shot. No big deal though, all he had to do was change the ending.

“It worked out for the better cause it puts a little question mark at the end of the movie, but the story is still the same,” Pimentel said. “And at the premiere people reacted in a really nice way.”

And what did making this movie teach Pimentel?

“It helped me figure out what kind of style I’m supposed to be doing,” he said.

But if you want to see for yourself, you can check out the trailer on the Insider website or go to Red River this weekend and see the whole thing.