Tired of that boring, natural color of your dog? Bark Now! has a cure

Head down and turn him into candy corn

Home » Articles » Tired of that boring, natural color of your dog? Bark Now! has a cure 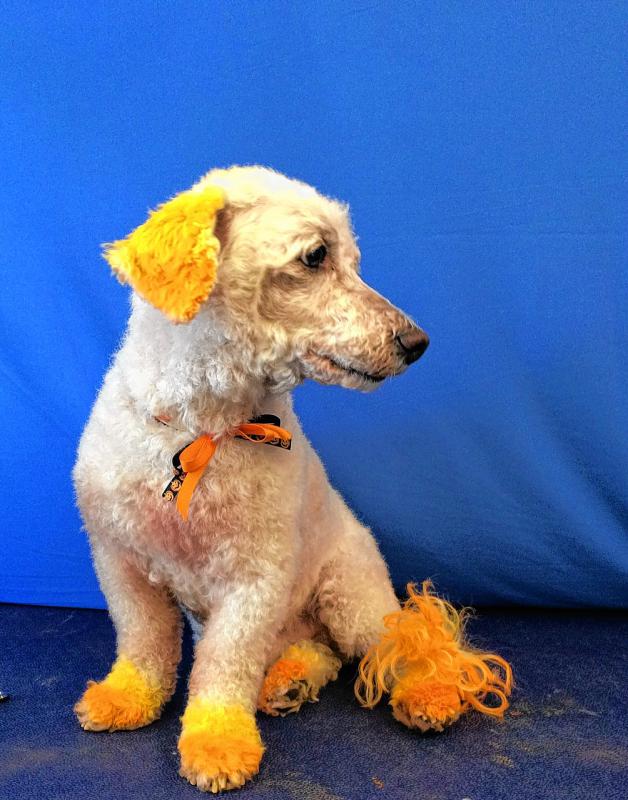 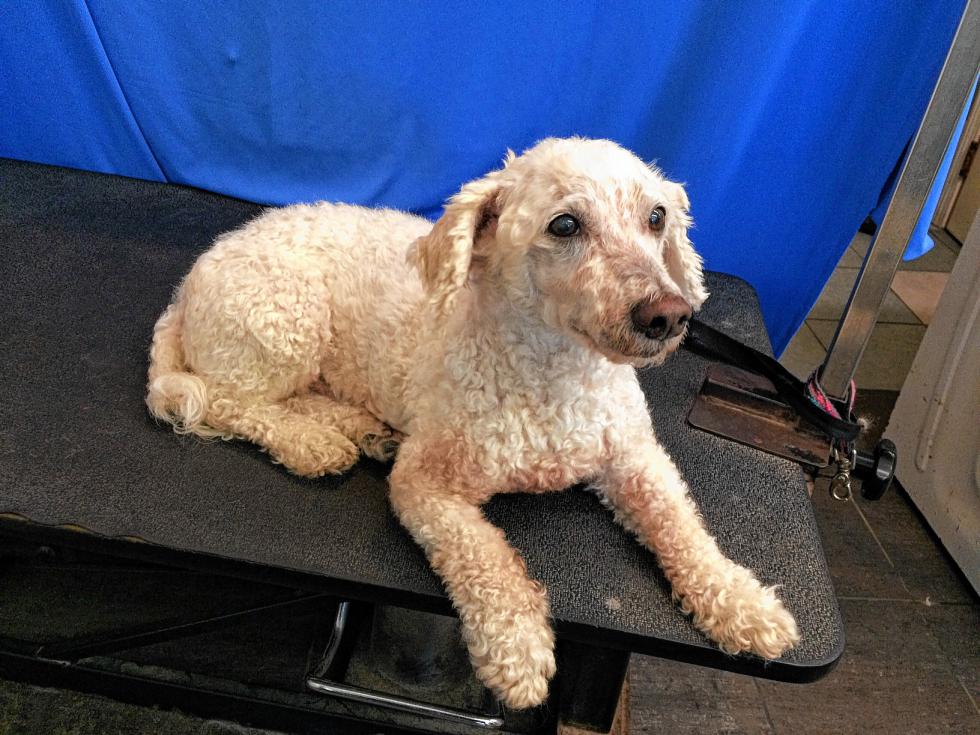 Bark Now! employee Liz Tilton volunteered her dog Rascal to be turned into a candy corn for Halloween. This was before he got all inked up. (Courtesy of Kris Tripp) 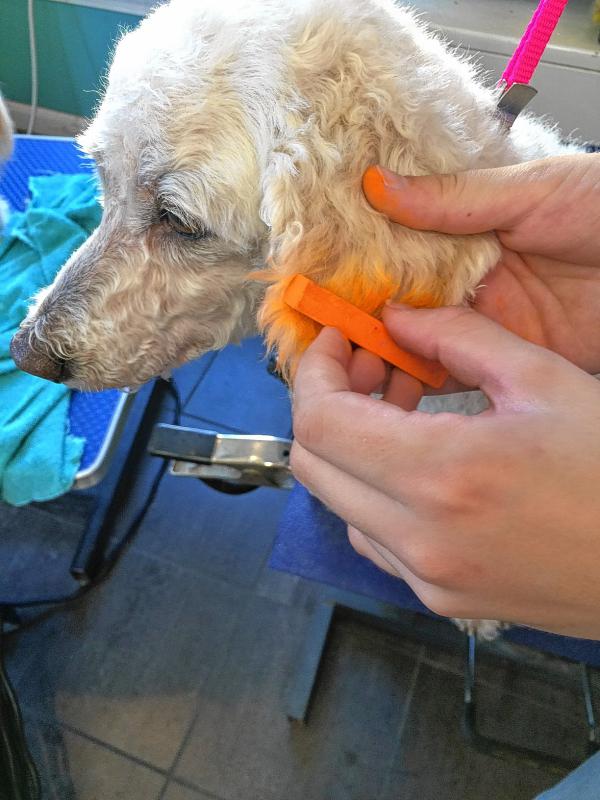 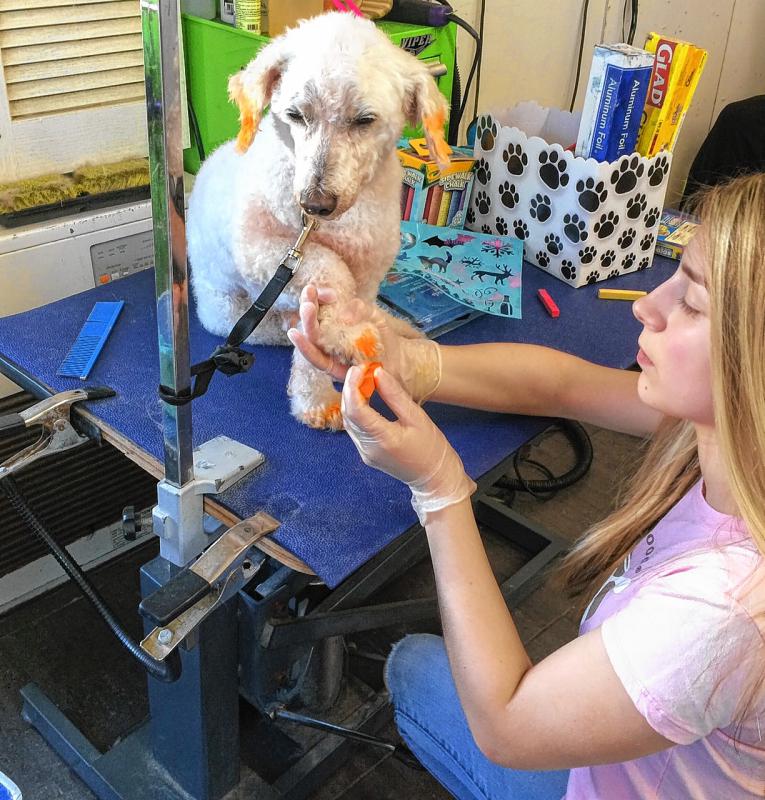 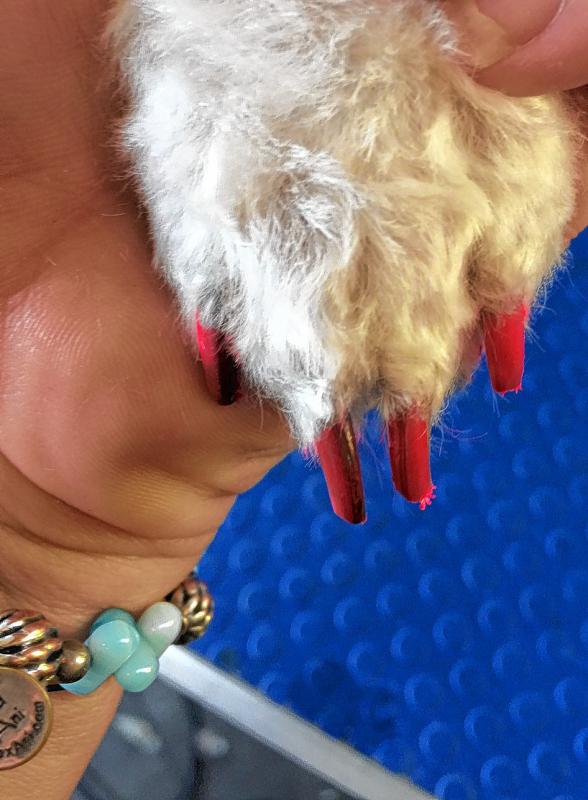 This pup even had its nails painted. How stylish. (Courtesy of Kris Tripp) 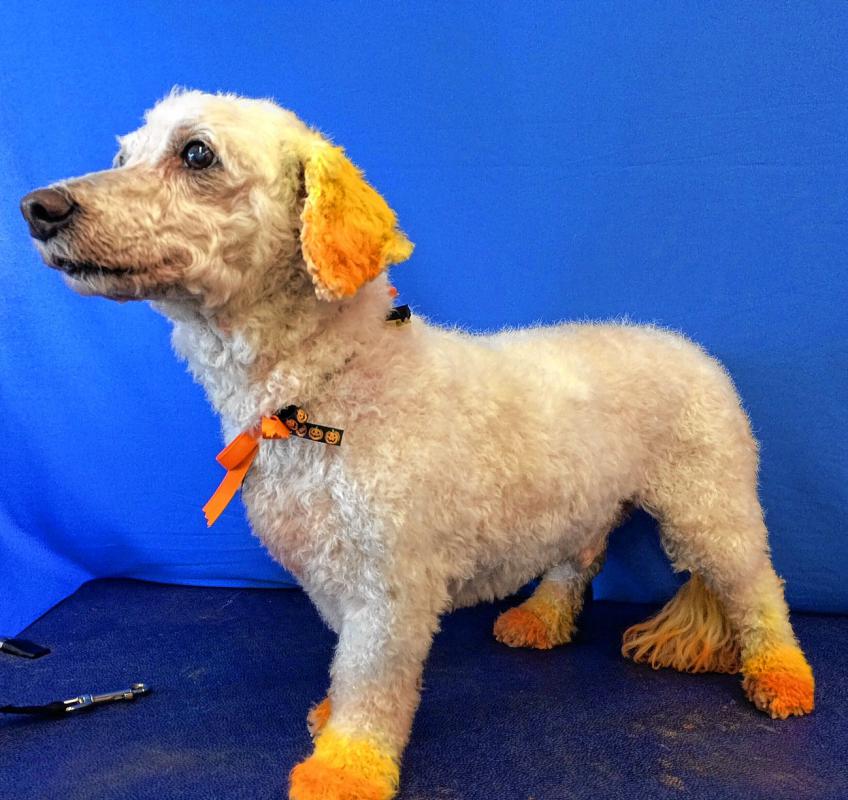 Rascal looks like a new man after getting his orange tips. (Courtesy of Kris Tripp)

In today’s dog-eat-dog world, you really have to stand out from the crowd to get ahead in life. Blending in means you just get lost in the shuffle. And we’re not just talking about you – we’re talking about your furry friend, too.

If your pooch is one of those run-of-the-mill, everyday white breeds who just can’t seem to make his or her presence known, head over to Bark Now! and check out some of their funky coloring services.

Kris Tripp, owner of the pet center on South Main Street, used to color dogs in her kitchen before she opened up her own boutique.

“When I opened the boutique, I wanted to do something totally different,” she said. “I went to a couple trade shows and saw the creative styling and thought, ‘Ooh, that looks fun.’ ”

Creative styling refers to anything that involves the application of color, designs in the coat or even eyelashes, and it’s something Tripp enjoys offering.

She and her team will dye your dog a completely different color if you want – purple, pink, blue, orange – and paint its nails, too. It sounds an awful lot like those grooming stations the Wizard of Oz’s employees had set up for Dorothy and the gang (and remember those multi-colored horses?).

If an all-out color swap seems a bit much, you can opt for colored trim or accents instead. Just a little something to add some flare and turn some heads on Main Street.

Tripp recently had a dog in the shop, Rascal, who wanted to be turned into a candy corn for Halloween. Sure, it was an odd request, but remember, the customer is always right.

The candy corn motif meant Rascal would be getting his paws, ears and tail tinted orange while his white face and body would remain.

They use all nontoxic products at Bark Now!, Tripp said, and it’s pretty much all stuff you can find anywhere – they use pastels, like from art kits, to color the dogs’ fur.

The color is not permanent, but it does last for a few weeks, so make sure you pick a color you can live with for a little while.

Tripp said that although the shop does not get a ton of calls for custom coloring, it usually picks up around Halloween, as people want to doll their pups up with semi-permanent costumes. She said she has also dyed several dogs pink for breast cancer awareness.

The easiest and best candidates for coloring are white dogs with hair-like coat – bichon, poodle, shih tzu – like Rascal, a bichon cross.

Rascal was adopted from the Pope Memorical SPCA, for whom Tripp does a lot of doggie makeovers. She donates her time “and we get them all gussied up and send them back all pretty and ready to be adopted, and this was one that came in,” she said.

There was a different dog in the shop earlier in the day, before Rascal came in, getting its nails painted. Unlike the fur coloring, which is somewhat rare, Tripp said the nail painting is pretty popular.

“Sometimes we will do it just because we think it looks cute,” she said. “Or sometimes the customer will ask for it specifically.”

And because even painted dog nails are becoming so passé now, Bark Now! will go the extra mile and put glitter or diamond appliques on top of the paint, just to make them pop a little more.

“We actually use a special nail polish designed for dogs – it comes in a pen – and it’s a lot easier to put on than regular nail polish,” Tripp said. So hold off on using your own stuff when it comes to the nails.

But when it comes to the hair, Tripp said don’t be afraid to try this on your own. Just grab some sidewalk chalk and have at it. It’s pretty much the same only it doesn’t last as long.