The thing was packed, so get there a bit early 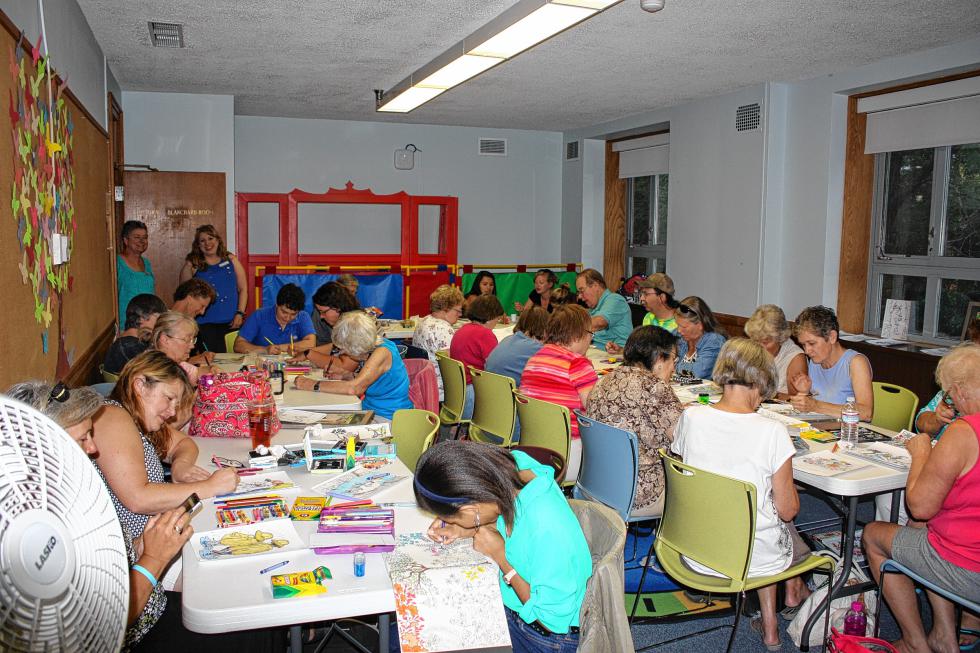 The Blanchard Room at the Concord Library was absolutely packed with adult coloring enthusiasts. Library officials counted 35 in total over the course of the evening. (JON BODELL / Insider staff) 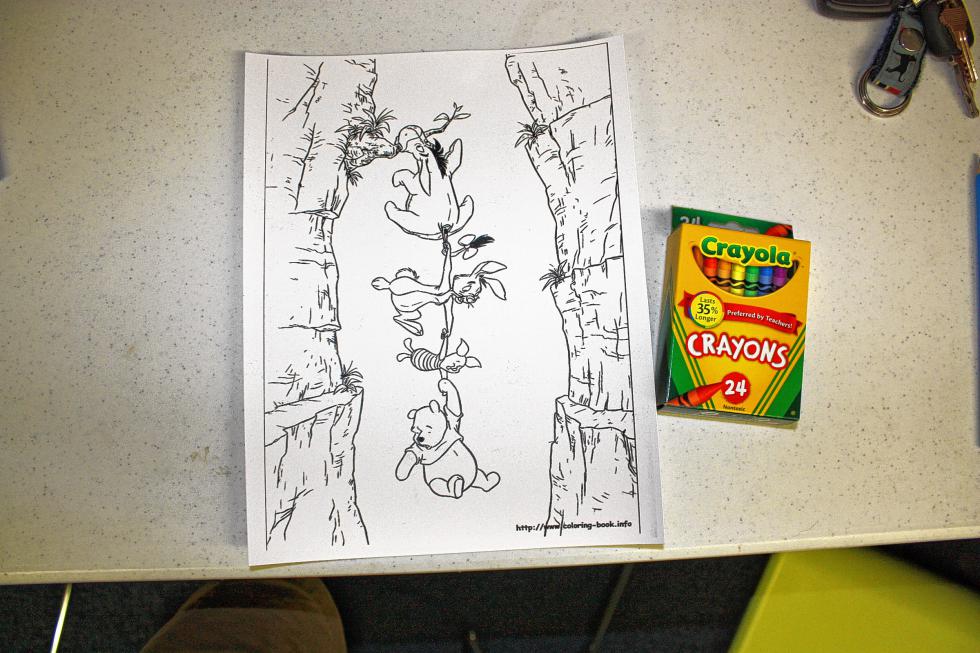 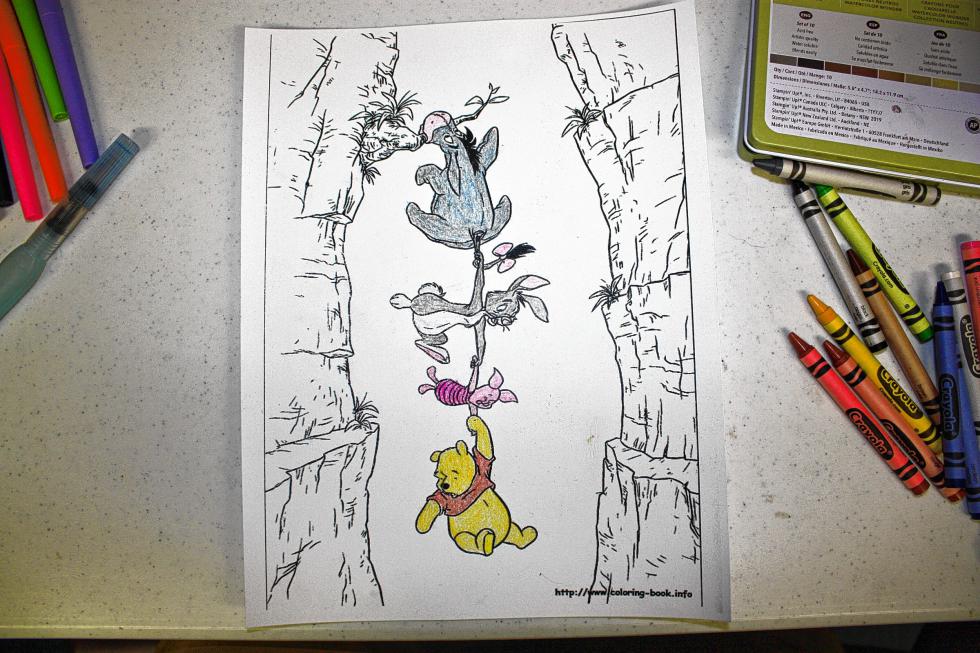 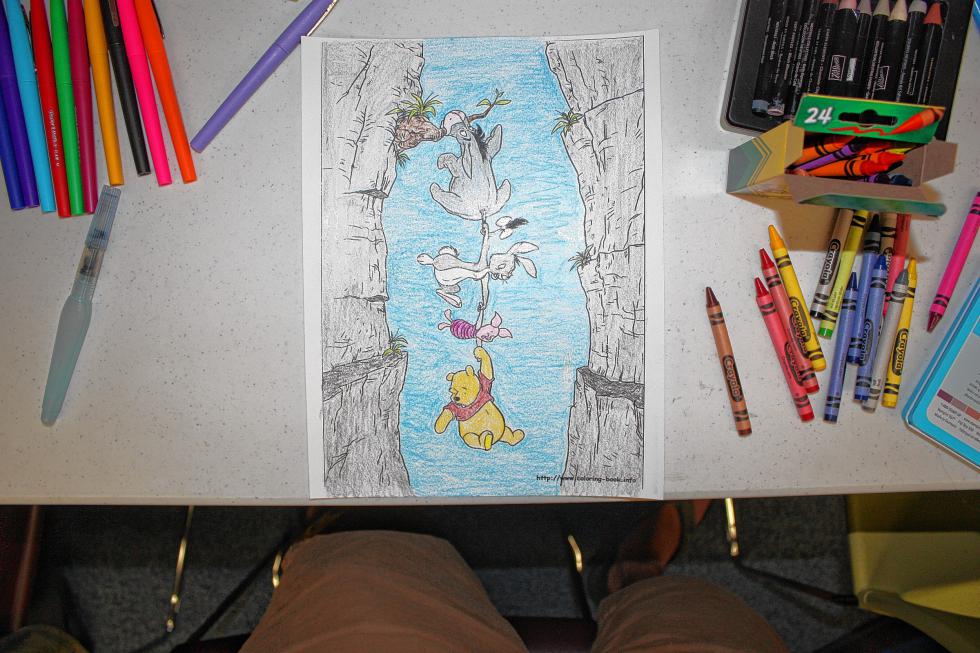 Childhood was a much simpler time.

Now sure, you can still break out the G.I. Joes/Barbies and sing Frozen songs until you fall asleep at 1 p.m., but how rewarding is that? (Actually, that doesn’t sound that bad at all.) A better idea though, if you’re looking to go back to those good ol’ days, would be to check out adult coloring at the Concord library.

The Concord Public Library just started hosting Adult Coloring Night in the beginning of September, and the plan is to hold the event the first Tuesday evening of each month (although the first one happened to be on the second Tuesday of the month). Upstairs in the Blanchard Room, you’ll find an assortment of coloring pages that have been printed off the internet, as well as plenty of art supplies such as crayons (of course), colored pencils and a couple of different kinds of watercolors. You can also bring your own supplies if you want. Once you’ve selected a picture and something to color it with, it’s off to coloring.

And that’s pretty much it. There’s no instruction, no lesson plan, no agenda. Just a bunch of grown adults, sitting in a small room at the library, elbow to elbow, coloring away and enjoying each other’s company. Ah, the innocence, the nostalgia.

The first night of adult coloring was a smashing success. Pam Stauffacher, children’s services manager at the library, said 35 people showed up. She wasn’t sure what the turnout would be, but said she was encouraged by the level of interest. “Awesome,” she said.

Jocelyn, perhaps the youngest in attendance at 23, had a blast. “Definitely a pleasant surprise,” said the coloring enthusiast, who brought her own adult coloring book she picked up from BAM! in Concord. That book, by the way, featured some crazy intricate designs that only a true coloring pro would dare tackle – much more challenging than the Winnie the Pooh scene I chose.

Marie, 55, of Northfield, and Nancy, 51, of Webster also enjoyed themselves.

“Going from coloring by myself at my house to having it be a social gathering, and you get to be doing something that you’d be doing anyway, it’s just great,” Nancy said.

The sentiment seemed to be shared by most in attendance, as it was often hard to hear the person right next to you due to all the chatter and laughter that filled the room. Yes, during adult coloring it’s okay to use somewhat outdoor voices in the library.

It was definitely an adult crowd, with just a handful of twenty-somethings sprinkled in with folks who probably have kids in their 20s or 30s, but there’s no hard age limit, despite the “Adult Coloring Night” billing.

“It’s open to all ages,” Stauffacher said. But when asked what would happen if every adult showed up with a kid or two, “That could get a little crazy,” she admitted.

Since the program is still in its infancy, library staff are still gauging the popularity and thinking of ways to improve it. A larger room may be considered, for example, and a kids’ coloring night may also be in store.

But in the meantime, feel free to head down to the library Oct. 6 for the next installment. If the first one was any indicator, this one should be even more packed, so you’ll probably want to get there early.

And while you’re at it, go all out – wear your favorite light-up sneakers with Velcro straps and bring a Sunny D and a little bag of potato stix to get the full youth- rediscovered experience. You won’t regret it.