Finally, a group and place dedicated to slacking off here in Concord

Home » Articles » Finally, a group and place dedicated to slacking off here in Concord 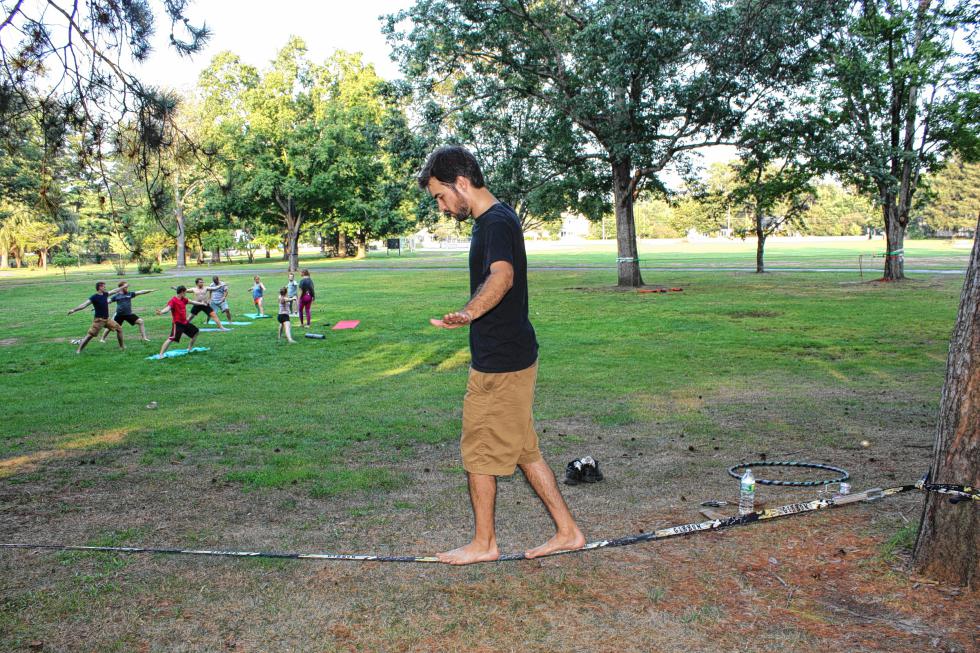 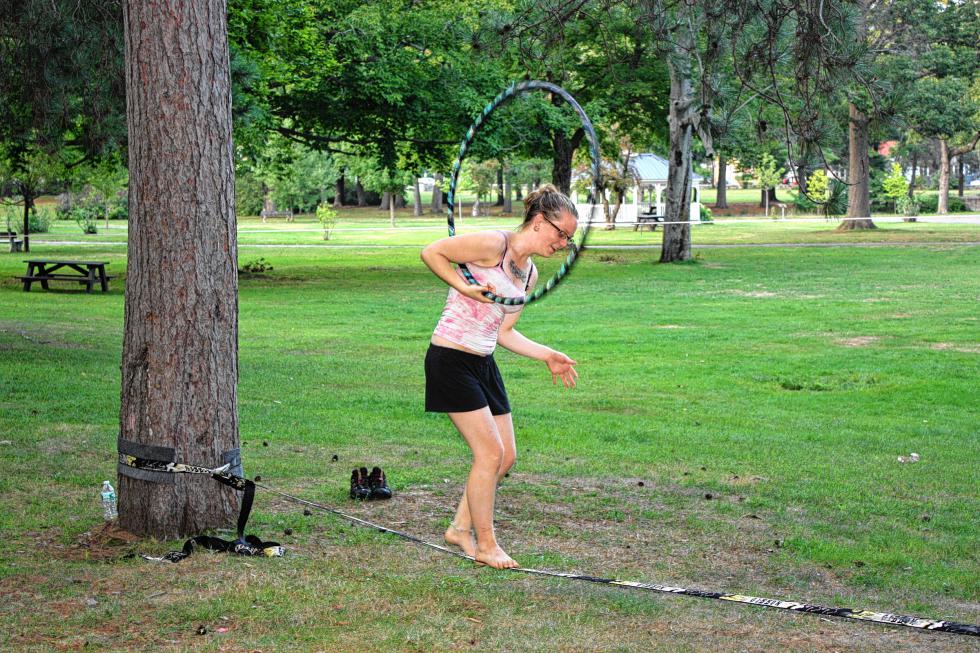 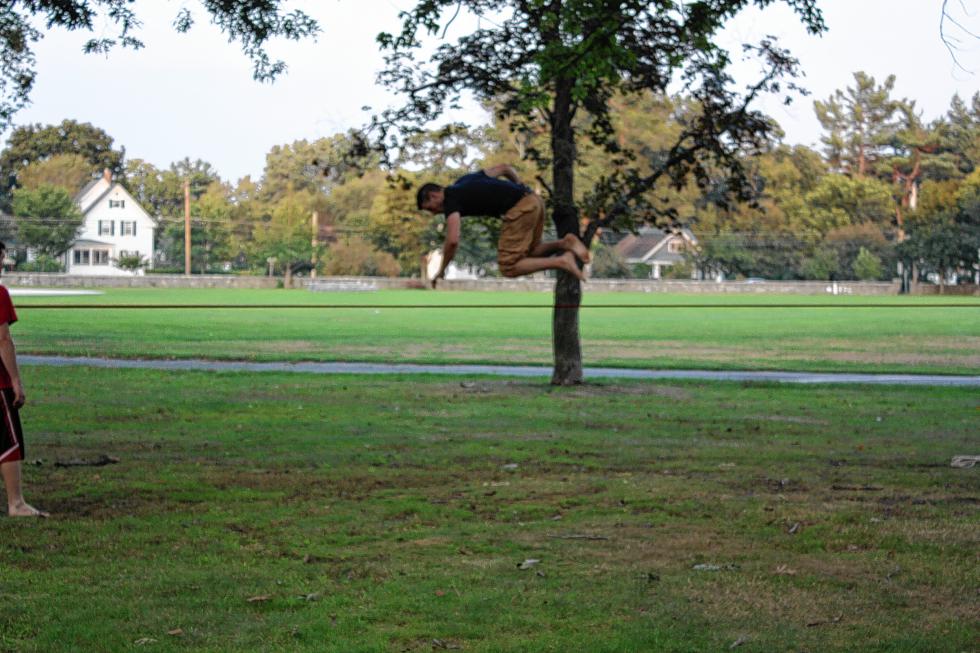 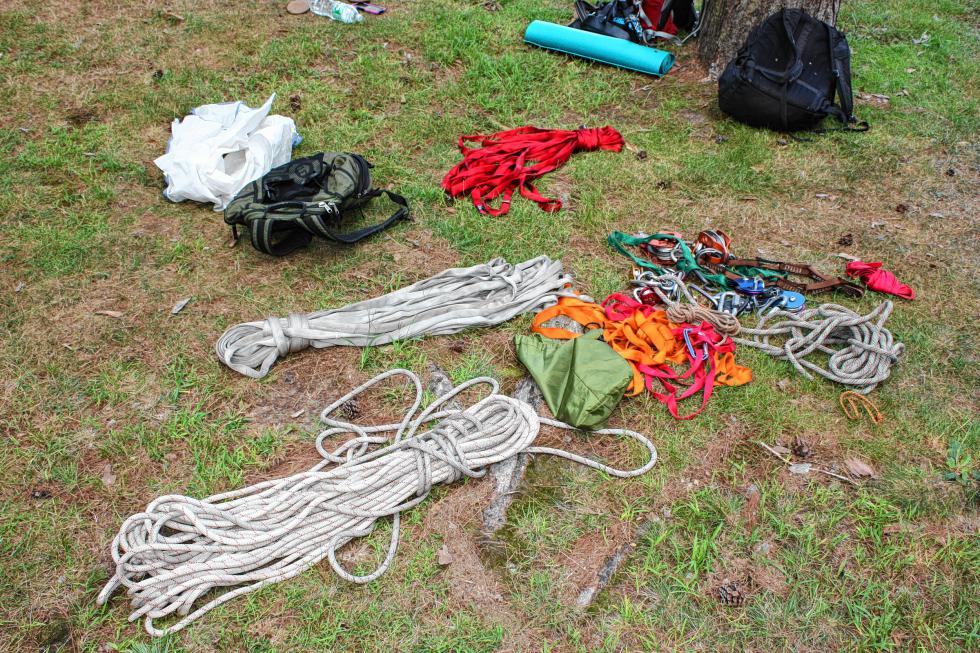 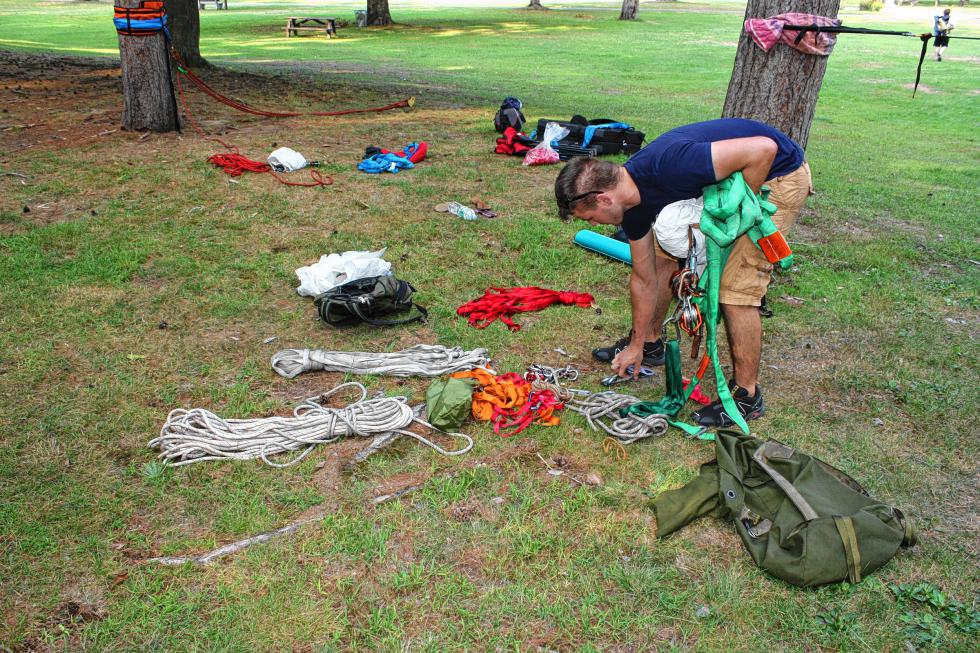 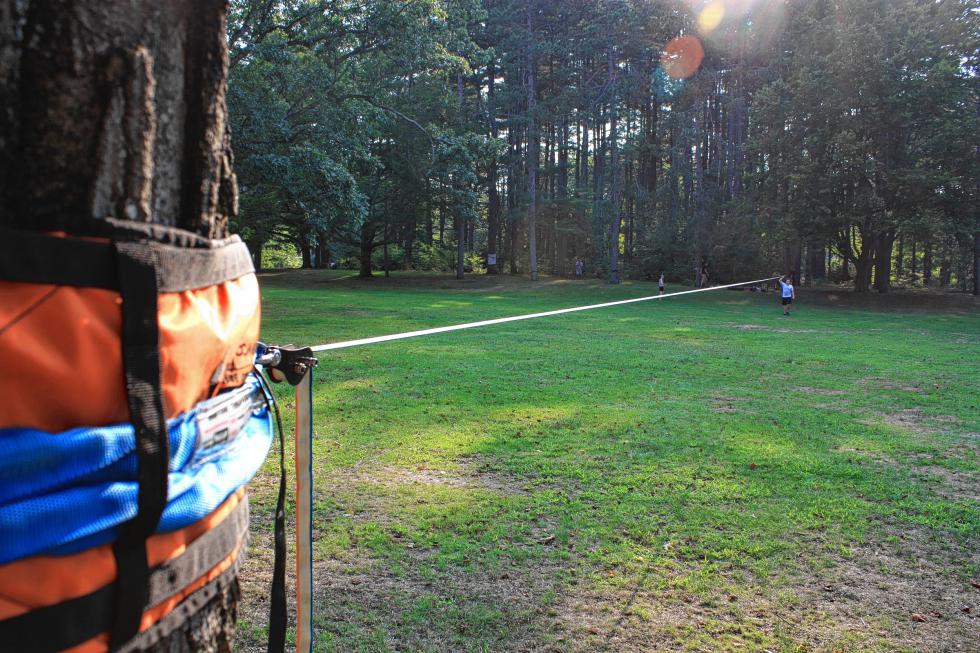 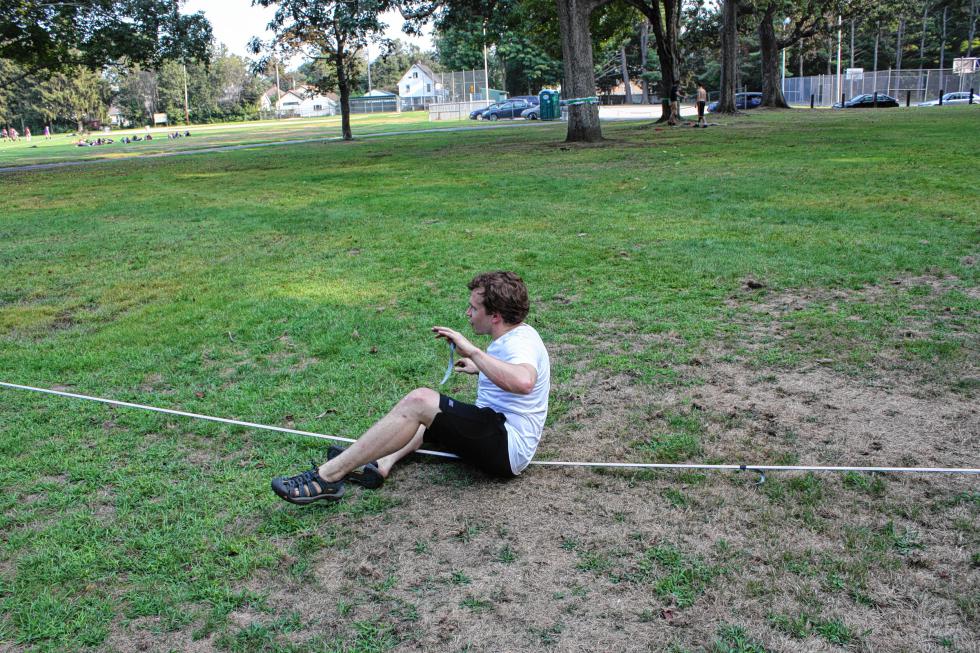 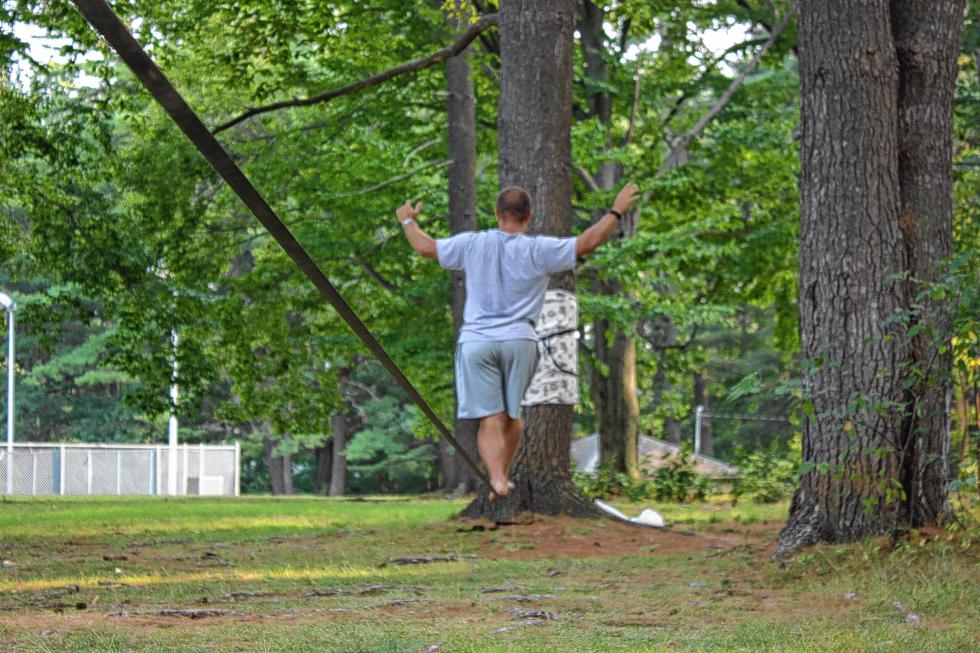 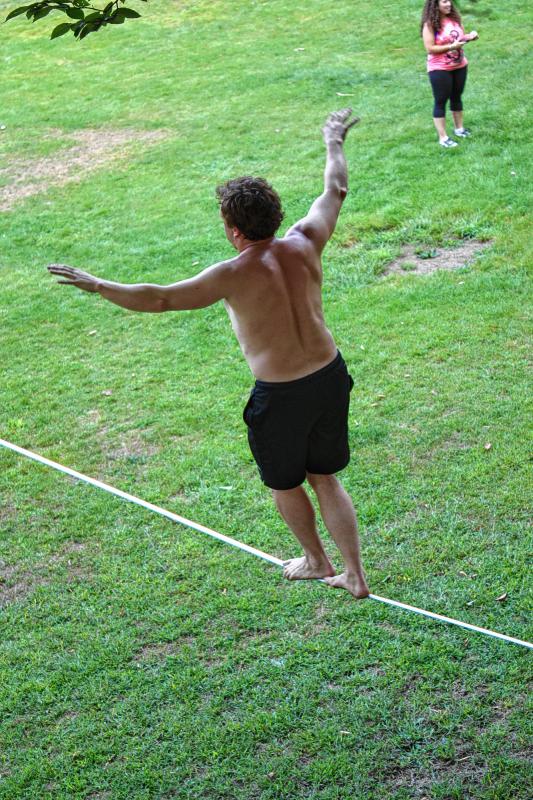 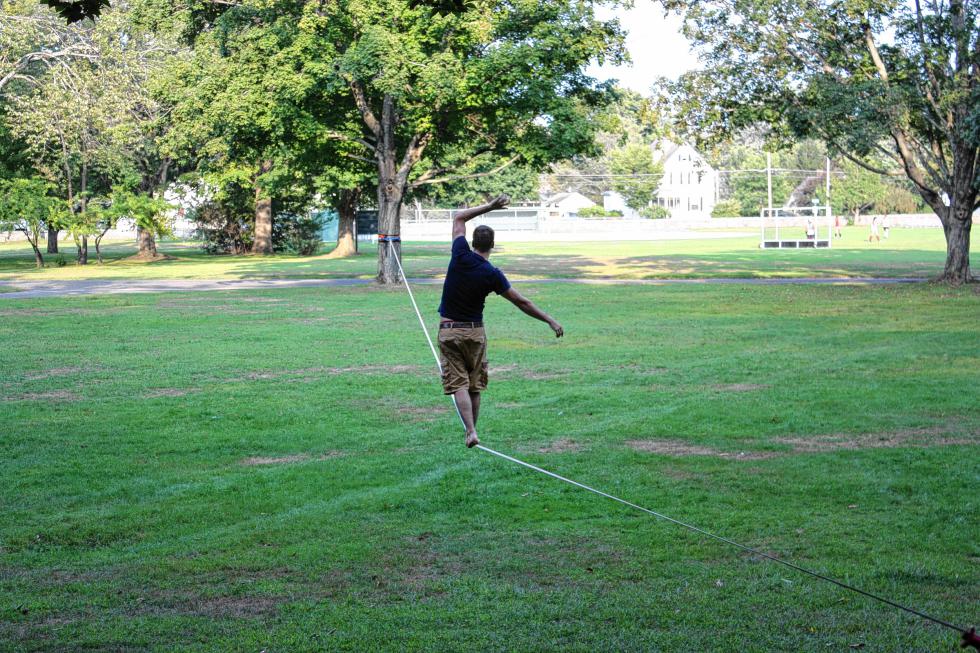 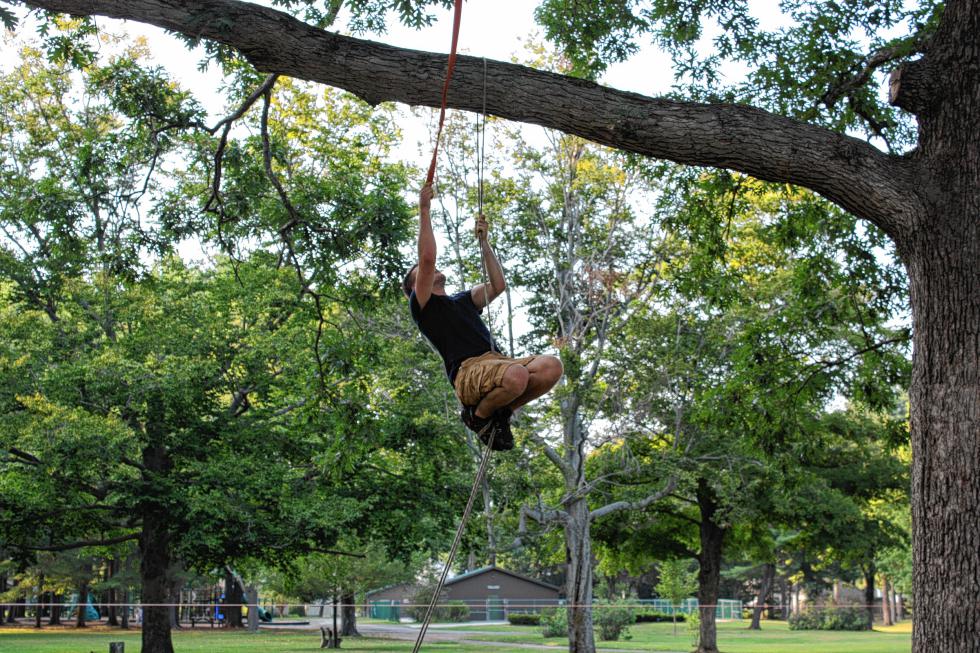 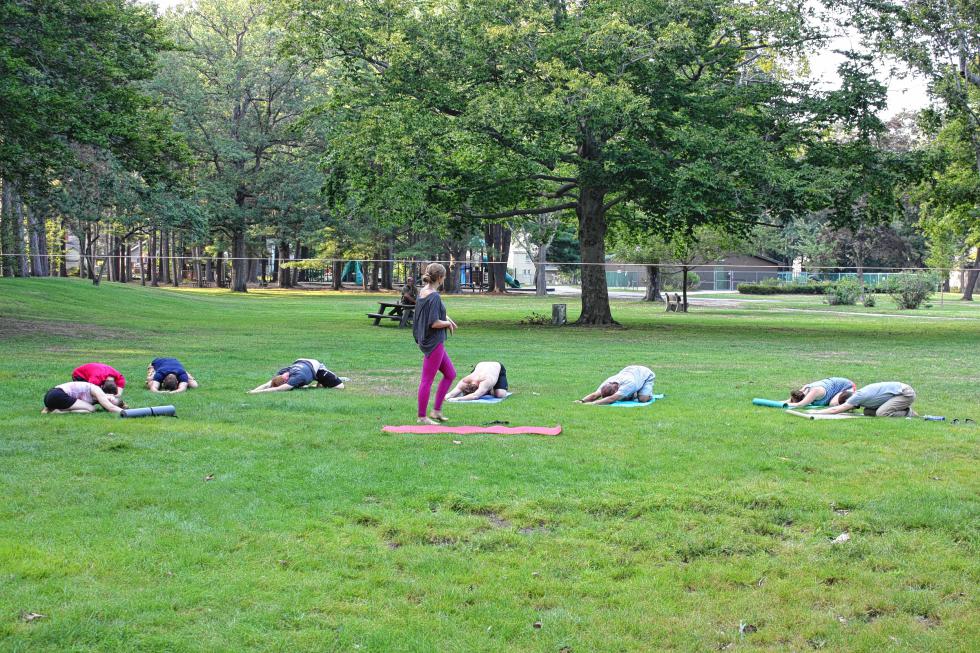 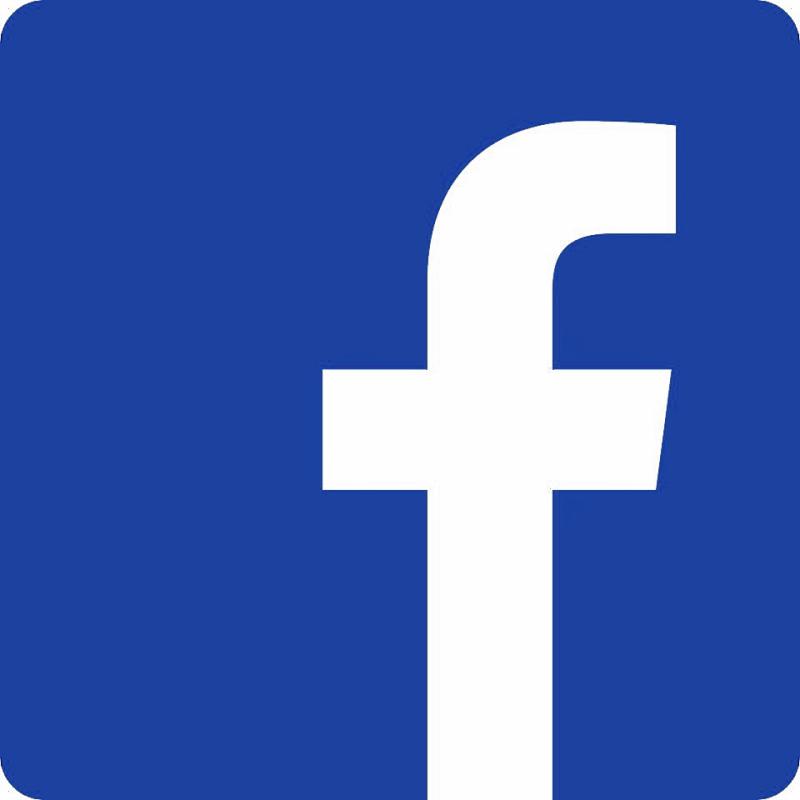 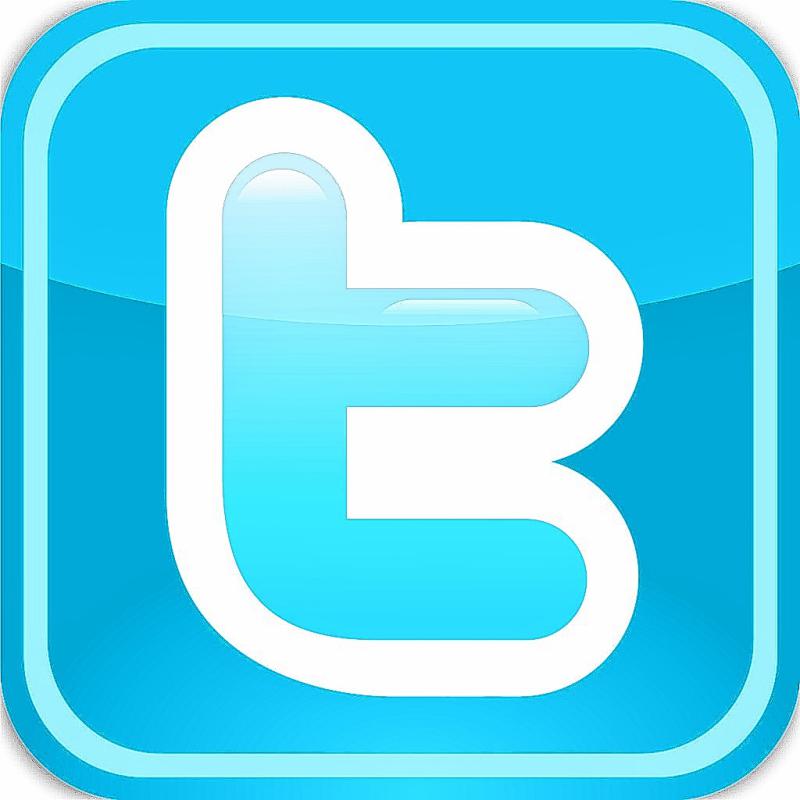 If there’s one thing we can get behind here at the Insider, it’s slacking off – just don’t tell our bosses.

Luckily, a new club gives us a place to do just that without that pesky risk of being fired. It’s called Slack Off Concord, and it meets at Rollins Park on Monday afternoons (and sometimes Wednesdays).

So what do you do, just sit around and fail to accomplish things all day, pushing them off into the extremely distant future while passing out with a half-eaten bag of Doritos on your chest? Not exactly.

The name refers to the “expressive art sport” of slacklining, a practice just like tightrope walking. A line similar to a seat belt is strung between two tree trunks and ratcheted tightly to create enough tension to walk on. Then it’s all about balance and control of the body and mind.

“Try to focus on a central drishti point, usually it’s like the end of the line,” said organizer Dan Walsh of Concord, using a yoga term that refers to gazing at a focal point to maintain concentration. “Don’t focus on the line itself . . . Don’t look at your toes and don’t look at the line that’s moving.”

Walsh, who organized the informal group of “slackers” on Facebook, got into slacklining about two years ago at Evo Rock + Fitness, a rock-climbing gym in Concord that also has a beginner-level slackline. It was there that he met Lindsay Havlicek Bell, a doctor of psychology, certified yoga instructor and promoter of good vibes.

Havlicek Bell and Walsh have paired up to host the combo slacklining/outdoor yoga/hula-hooping club with the goal of just relaxing, having fun and getting some exercise – and of course, fresh air. It is outside after all.

“It’s all kind of mindfulness, meditation and getting together with good people, basically,” Havlicek Bell said.

And plenty of people showed up last Monday, the fourth meeting of the group, ready to get their slack/yoga/hoop on.

Jimmy Batchelder of Concord was one of them. He’s been slacklining for five years, and it shows: He spent a good chunk of the day performing crazy stunts on his trick line, a line set up to allow the user to basically treat it like a trampoline. He also set up a humongous swing that fires you a good 20 feet in the air before you swing back down and go up backwards. If anyone can make slacklining an extreme sport, this is the guy.

Alex Thomas, a Pennsylvania native who’s stationed in Lee right now, was also there. He’s only been slacklining for about five weeks, but he’s already hooked.

And then there was Erika Cook, making her second appearance at the club. The Concord resident tried her hand at hula-hooping while walking the beginners’ slackline, which was about 12 feet long. Her friend, Cody Strople of Allenstown, walked on the ground next to her, providing a shoulder to lean on. Neither had much experience with slacklining before showing up to Slack Off Concord.

The format of the get-togethers is both structured and uninhibited. Participants arrive around 4:30 p.m. to begin setting up. Once lines are taut, everyone is free to start slacking, hooping or just hanging out. At 5:30, Havlicek Bell begins the yoga class – you don’t have to do yoga if you don’t want to, or you can do just the yoga if you prefer. At 6:30, there’s a quick break before moving on to slackline instruction, led by Walsh.

During the instruction portion of the day, you’ll learn how to get on the line using one of several mounts, such as the sitting mount and the chongo mount. You’ll learn that a thinner line is better than a wider one, and that it’s better to walk straight down the line rather than turning sideways.

As far as the sport itself, there are different types of slacklining. There’s highlining, which is like the kind of stuff you see on TV specials where somebody walks a line very high off the ground. There’s tricklining, which is the act of bouncing on the line to perform aerial stunts. There’s waterlining, which is just setting up a line over a body of water so when you fall you make a splash. And then there’s longlining, in which you try to walk the longest line possible. (Batchelder, the five-year veteran, said he’s walked a line as long as 210 feet).

There were no high lines set up at Rollins Park, mostly because that’s a more advanced practice that generally requires safety harnesses, but they did have a trick line and a line a little longer than 100 feet set up.

All of this sounds kind of dangerous. Probably a lot of broken ankles and busted toes, right?

“You get slack tats, which is when if you slip off the line or you mess up or fall on the line, it’ll snap back up and hit you and give you a nice awesome welt, but I’ve never been injured,” Batchelder said. You do have to be careful, though: “My friend Clay did fall off one and he bruised his kidney.”

Nobody was hurt last Monday – no slack tats, even. All was well.

People mingled and laughed all day long. A woman walking her dog stopped by to check out the scene. A guy posted up at a bench for a few minutes to watch. A cell phone played cool music in the background (strangely absent from the playlist: Johnny Cash’s “I Walk the Line,” Stevie Ray Vaughan’s “Tightrope,” Toto’s “Hold the Line”). All in all, it was a pretty relaxing time.

And that’s the whole point.

Although the group has been organized through Facebook event pages thus far, it’s not an exclusive, members-only kind of thing. Walsh said he’d like to see more people come out – there were about eight Monday, even though he was expecting closer to 14.

The group is also looking for donations for the N.H. Med Bank, so the more the merrier.

If you want to get involved or learn more, search for Slack Off Concord or Slackline New Hampshire on Facebook, or check out HappyWholeLife.com to stay in the loop of what Havlicek Bell has to offer.