School’s always in for summer at St. Paul’s

Home » Articles » School’s always in for summer at St. Paul’s 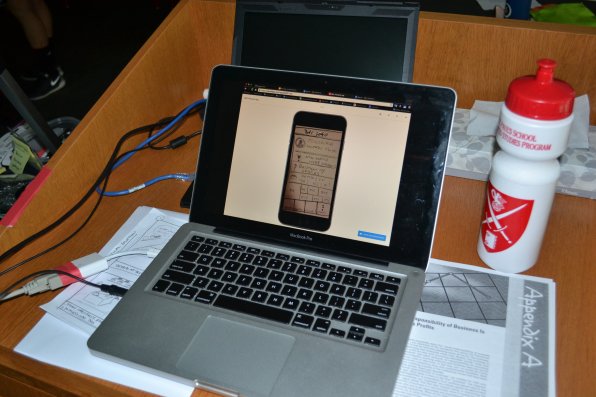 That’s what a prototype app on a phone on a computer looks like. 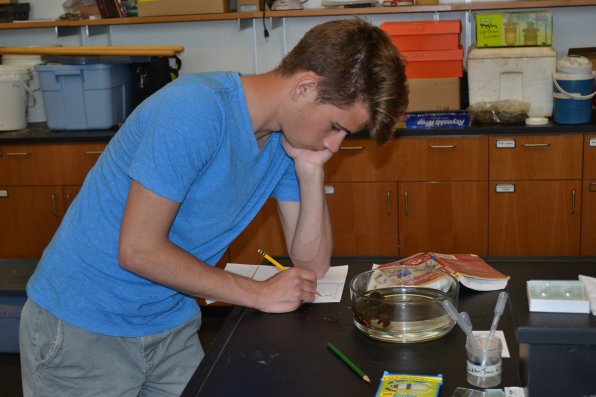 Zack Martin, a student at Manchester Central, gets up close and personal with a lobster. 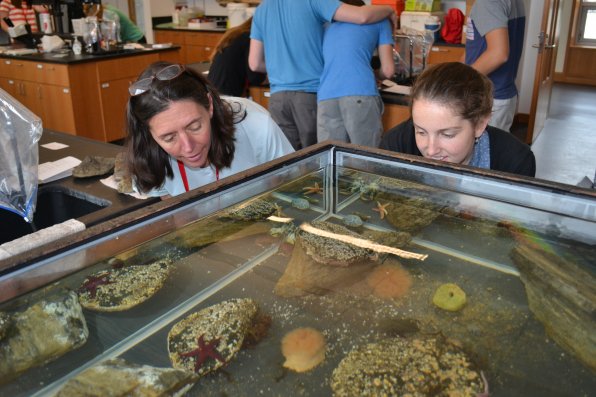 Marine biology teacher Marla Jones scopes out the holding tank with intern Molly Nickerson just one day after capturing the little critters from a tidal pool in New Castle.

Generally, it’s frowned upon to use your cell phone during class.

You have to be pretty sneaky these days to get away with checking out a Snapchat, updating your Facebook status or sending that “I’m so excited about learning” text to your BFF. And if you get caught you better quickly prepare for public embarrassment, loss of your phone for the rest of the day and a not-so-endearing look from your teacher.

But there’s one class in the St. Paul’s School Advanced Studies Program where having a cell phone in front of you is not only encouraged, but actually necessary. Innovation in Action is one of the newer courses offered as part of SPS’s summer studies program that dates back to 1957, and you won’t find anything like it anywhere in the state.

In just it’s second year, students in the class are getting a crash course in what it’s like to be entrepreneurs. And what better way to learn about starting a business then working with and meeting business owners.

So they took a field trip downtown, dropped off fliers and connected with some businesses like the Concord Co-op, Live Juice, Gibson’s and Delta Dental (which we know is not downtown).

“We wanted one central location to work with,” said course instructor Blake Sims. “Most of the stores are the ones we just walked into.”

They talked to customers, surveyed the owners and bounced ideas off of other students, trying to identify areas of need for a specific business.

Working in teams of two, the “company design challenge” required two solutions to improve the business, one digital and one non-digital.

“I tell them there’s no right answer,” Sims said. “It’s all about balancing the company and what they want and the customer.”

The digital side could be an app for that phone we’ve been talking about, or a crowd funding initiative, and the non-digital could be a new product line or rearranging the space to make for a more streamlined experience.

Concord’s Glynnis Cummings and Sam Worobey of ConVal had the Co-op and chose to create an app that helps speed up the shopping process. You put in your shopping criteria, whether it be something like gluten free or other dietary restrictions, and then scan items to see if they fit in with your needs.

“I go to the Co-op a lot, so I thought it would be great to work with them and see what they do,” Cummings said.

For the non-digital side of things, they thought of a check-out-as-you-go system or a redesign of the store, which would include samples up front – and we have to agree that is one heck of an idea.
And for the final two weeks of the program, each student will design their own business, create an expo booth and take part in a pitch competition.

When we stopped by last week, the marine biology program was just starting to examine some actual living things. They had taken a field trip to New Castle the day before to collect some organisms during low tide, and they were finally set to investigate.

“It’s the first time we’ve actually got to work with marine critters,” said Marla Jones, who has taught in the program almost every year for the last 20 along with her husband, Mark Holding.

After all, they are basically marine biologists for the summer, so might as well act like it. From lobsters to crabs and star fish to things we have no idea what they are, students like Jillian Provost and Kelly Varnell, both of Concord, spent their entire time at the ocean trying to find specimen to study. Then they studied them, documenting what they saw and determining what it was.

“I really like biology and chemistry and I was interested in this topic,” Provost said. “I wanted to see if I like it ‘cause I don’t really know what I want to do for a career yet.”

“I’ve always really liked science and marine biology is a section of science you don’t do a lot with in school,” Varnell said. “I really like taking a look at different eco systems.”

Provost and Varnell actually live about 10 minutes from St. Paul’s in the same neighborhood and have siblings who took part in the program, but Provost goes to Bishop Brady and Varnell to Concord High.
“It’s ironic that we ended up in the same class,” Varnell said.

The journey to New Castle is one of many field trips the class takes over the five-plus weeks, including a trip on UNH’s Gulf Challenger for water quality research, an adventure to Appledore Island and the Cold Regions Research and Engineering Laboratory in Hanover to learn about research efforts in the poles.

You don’t get those kind of experiences typically when you study marine biology during the school year.

“A lot of these classes are something you can’t take in a public school,” said Pierce Ellinwood, assistant director of the program and former intern and program alum.

The great thing about the program is that the students, who are all going to be seniors in the fall and come from public and parochial high schools from all over the state, as well as home schooled students, get to focus on one area of study for the entire five weeks. When applying, they pick their top three choices.

“We try to do our best to place the student in a class they want,” Ellinwood said.

So if you got into artificial intelligence, which we feel has to be about aliens, that’s what you learn about for almost six weeks. Classes, the equivalent of college 100 level course, are held in the morning, six days a week, Monday through Saturday. Each student also takes a writing workshop three times a week for a total of four hours, where they work on improving their writing and how to put together a college essay. But there are no grades, just a system of ranking to show how well the students understood the material.

“To immerse yourself in something from 8:30 to 12:45 every day is unique in this day and age,” Jones said. “It gives them a realistic view of what they’ll be looking at if they pick a field like marine biology.”
For the most part, the students remain on campus and live there. They’re allowed to leave campus on Wednesday and Saturday afternoons, as well as Sundays, but otherwise they’re in one of the SPS dorms.

“It’s a little glimpse into boarding school life, which is kind of a glimpse into college life,” Ellinwood said. “It’s really a cool opportunity.”

They eat three meals a day and participate in afternoon activities four days a week, like playing soccer, lifting weights or tossing the frisbee around. There’s also an expectation that students will spend the equivalent of class time studying outside of it.

For some it’s a way to get a jump start on a career, while others use it as a way to figure out if their area of study is something they want to purse.

There’s more than 20-plus areas of study, from intro to Japan to Shakespeare for performance, along with molecular biology to changing the world.

Of the 84 public and parochial schools in the state, 76 are represented in the program this year, totaling 267 students, just over half of the 500 applicants. The average class size is 13 and the student to faculty/intern ratio is 3:1. Out of the 37 interns this year, 19 are ASP alum.

“I’m directing a program I probably wouldn’t have gotten in to,” joked director Mike Ricard.
To learn more about the program, visit sps.edu/asp.