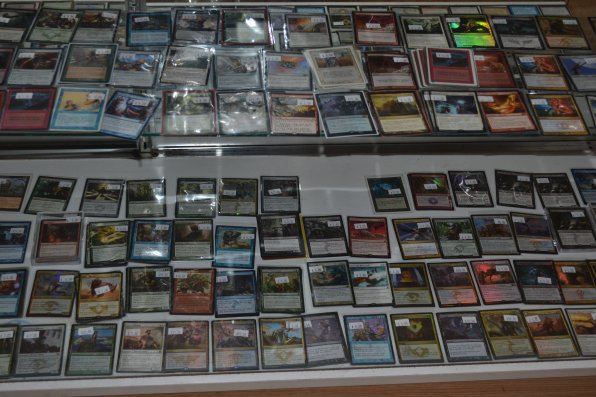 As you can see, there are plenty of cards to add to your collection when you’re waiting for the next match-up. 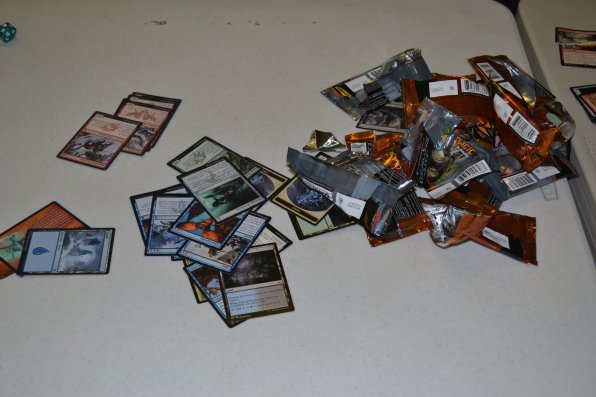 The aftermath of a draft. 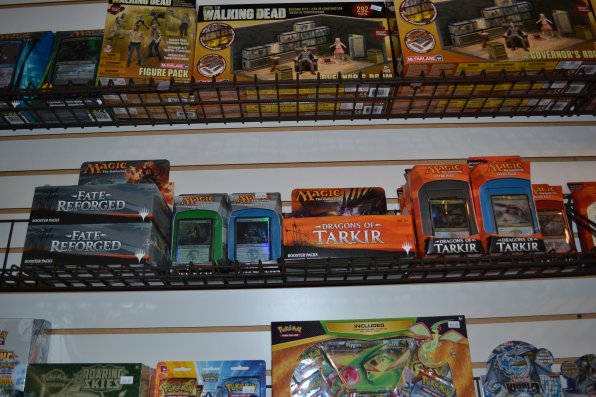 This is what you need to get your Magic career off the ground. 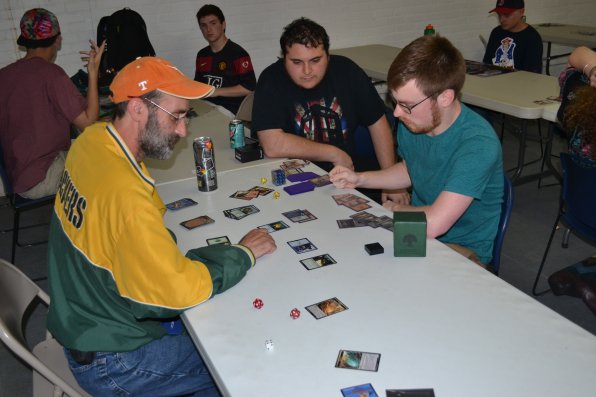 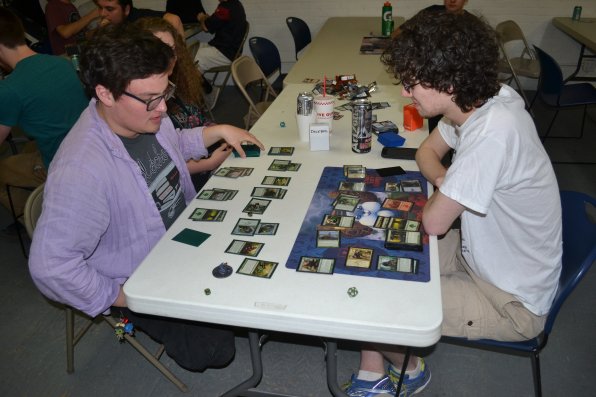 Let’s just say Jay Blair and Evan Collins are in the middle of one of those legendary Magic the Gathering battles.

It’s Friday night and the back room of Double Midnight Comics is a battlefield.

Lives are being taken left and right and nobody seems to have any interest in stopping it. Actually, it’s kind of encouraged.

No, this isn’t some sort of Night at the Museum type occurrence where superheroes and villains have come alive to square off in a fight to the death. This is just what happens every Friday from 7 p.m. to about midnight. It’s Magic the Gathering tournament night, and until you’ve seen it live and up close, you truly haven’t lived – or died for that matter.

There are no age restrictions or qualifiers to play. All you need is a basic knowledge of the game and the undeniable quest for bloodshed – fictitious, of course. And if you choose to play under the draft format, you don’t even need to bring your own deck.

“Anyone at any time can punk you into the ground,” Parker said.

Double Midnight Comics began hosting Magic tournaments years ago at their original location in Manchester, and when they opened a second spot on South Main Street in Concord about two years ago, it was easy to bring the idea along. Soon it became a hot spot for Magic players in this part of the state. Just stop by the store some Friday night and you’ll see.

There are two formats offered: the aforementioned draft scenario, and standard. The most popular these days is draft, where each player pays $13 to enter and gets two packs of Dragons of Tarkir and one Fate Reforged, the latest games in the Magic line, to build a deck. But there’s a catch – you don’t get to keep the 45 cards in your three packs.

“You only keep everything you draft,” Parker said. “A draft is a real gamble. It’s neat. There’s a whole different mentality to it. It’s a completely different way to play.”

When it comes to standard play, you bring your own deck made up of essentially the last two years worth of Magic sets and the cost is only $5 to enter.

The draft tournament is broken up into pods of eight to 12 players. You only play within your pod and each player gets three packs. Then the draft craziness ensues. You open up your first pack and take the card you either want the most for your collection or the one that will help you in the tournament.

“You have to weigh your options,” Parker said. “You might walk away with a $25 card that you might not use.”

The rest of the cards are passed around until they’re gone and it continues that way until all the packs have been opened and cards selected.

“They sort of make their decks on the fly,” Parker said. “There’s a lot of luck of the draw.”

Of the 45 cards you get, only about 23 to 25 go into your deck of 40, the rest is made up of manna, which is well known as land in the gaming circle, and allows you to play cards. Land is provided by the store in a big box on a back table. Some of the cards are left out because they’re not that good or just won’t be that helpful. There’s an art and strategy to building a deck and it comes over time.

“You can only do so much,” said Dennis Toutain, who has kind of a reputation around the store as a big-time player. “I put my deck together in my head. Hopefully you just find stuff that’s going to work. Some cards are only good in certain match-ups.”

Each pod gets 50 minutes to draft and deck build – then it’s on to the game play.

“It’s just for fun, something to do on the weekend,” said Ryan Vergato. “It’s either play Magic or do drugs and I don’t want to do drugs.”

The tournament consists of three rounds, 50 minutes each, where pairings are chosen at random by a computer program in the store. The match-ups are best out of three, so conceivably you could play anywhere from six to nine games in a Friday night. The players who go 3-0 in their match-ups get four unopened packs, while winners of two pairings get two packs.

Now we’re going to try and explain the game for you from a perspective of someone who dabbled a little bit in Magic back in middle school, but drew a complete blank when trying to remember. You start with 20 life (and you thought cats had it made) and there’s ways to add more during game play. You can play one manna (land) per turn and as many cards as your land allows. The better and more powerful the card, the more land it requires. You start with seven cards, alternate turns and draw one card after each round.

“There are cards that will only come into play later in the game,” Parker said. “There are so many nuances. There’s so much to this game.”

Some match-ups are over in a matter of a few turns, while other take the whole 50 minutes. It all depends on the level of skill sitting across the table from you.

“Some games you’re just locked down instantly and there’s nothing you can do about it,” Parker said.
You see a lot of the same faces each week, but the group is never completely the same. And if it was . . .

“If they all show up at the same time, it could get ugly,” Parker said.

For Parker, not only does it bring more excitement to the game he just so happens to sell at the store, but it also brings in money from drinks and snacks, as well as more card sales. Something we like to call a win-win. The only thing he needs to worry about is having enough packs in house.

“We’ve run into some scary moments where we’ve almost run out,” Parker said.

Talk about giving the masses a reason to riot.