Planning on making a quilt? Then check out these two local shops

Home » Articles » Planning on making a quilt? Then check out these two local shops 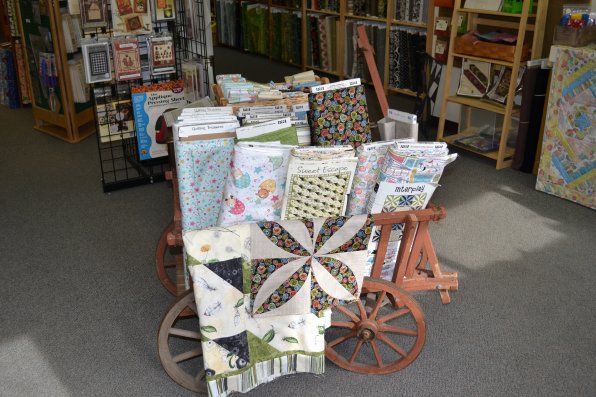 The sale cart at the Golden Gese. 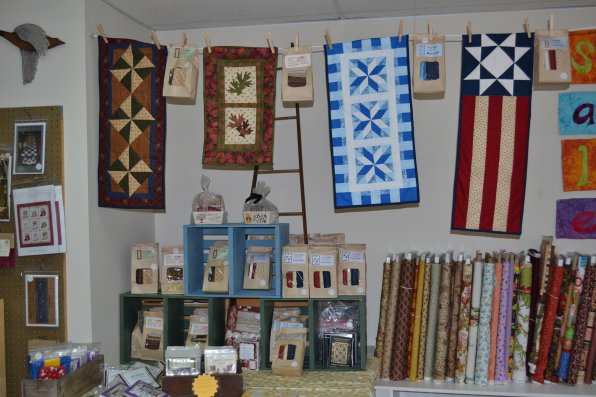 The best way to sell patterns is to make one and hang it on the wall. 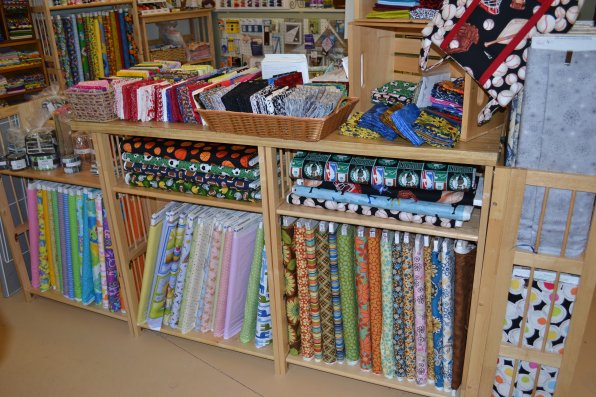 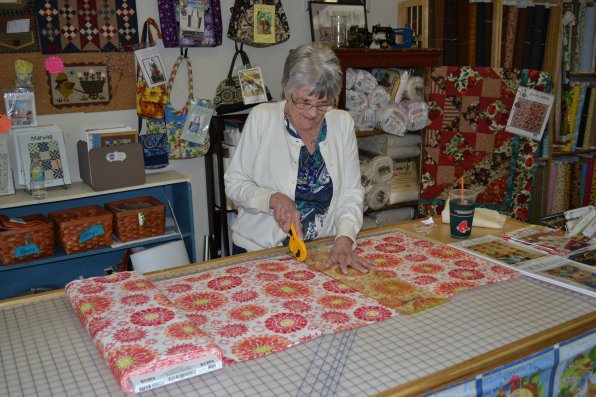 Nancy Gesen, owner of the Golden Gese, has plenty of experience cutting fabric after almost 29 years in business. 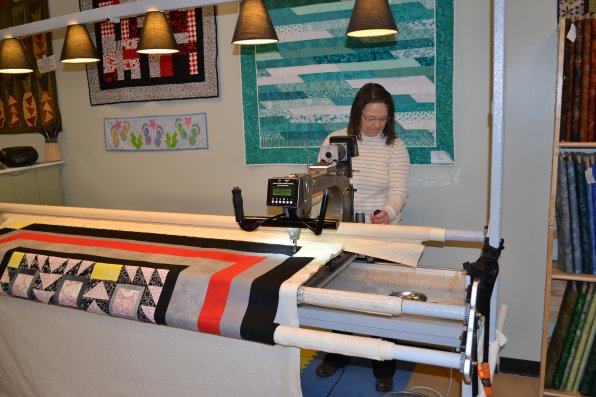 Betty Desmarais, owner of Lizzy Stitch, is a pro at quilting without actually looking at the quilt, thanks to her long arm machine.

You’ve probably driven by them on multiple occasions and never gave it a second thought.

But believe it or not, there are actually two quilt shops right here in Concord. We understand the oversight, because unless making large blankety things for people is on your list of hobbies, you’d probably have no reason to do a double take as you cruise by – which for the record is dangerous and never recommended. Although for those in the know, this certainly is old news.

The Golden Gese (pronounced like the bird but spelled that way because of owner Nancy Gesen’s name), has been a mainstay in the Concord quilting world for almost 29 years. Gesen spent the first 15 years in a basement on South Main Street before moving to her current and much larger location on Liberty Street, not too far from Concord High. Although we’re going to go out on a limb and say there’s not a wild stampede of business when the school day is over.

On the other side of town, on the corner of Sheep Davis and Pembroke roads (which is about 15 minutes by car or mere seconds if you have a teleporter), you’ll find Lizzy Stitch smack dab in the middle of a small strip mall. After three years in Warner, owner Elizabeth “Betty” Desmarais moved her shop to Concord in August 2013 in search of a bigger clientele.

Gesen and Desmarais grew up sewing, but neither had dreams of owning a quilt shop – it just kind of happened. Gesen was a dental hygienist who began quilting when her oldest daughter (now 56) was a baby.

“I needed something to do,” Gesen said. “I was staying at home and a new mom. Nap time was when I sewed.”

She would travel to shops in Meredith and Hillsboro Center, but once both of those closed she saw a need. And close to three decades later, we’d have to say she was right.

Desmarais worked in IT and had made quilts for family members and friends. She saw her hobby as a way to supplement her retirement, but decided to do it much sooner, even though it put retirement on hold a bit.

For a first time quilter, walking into one of these shops could be a little daunting. Gesen said she has more than 2,000 bolts of fabric, and we won’t argue since we didn’t count, but we did see plenty of racks.

“I have a good variety of fabrics,” Gesen said. “After all these years, I kind of know what my customers want. You have to bring in new fabrics to be successful.”

Lizzy Stitch, the shop’s name derived from Desmarais’s childhood nickname after her teeth went through her bottom lip in a car accident, is a smaller shop but still has well over 1,000 fabrics to choose from. So if you can think of a color or style, odds are you’ll be able to find it at one of the two places. We’re talking from Civil War reproductions to boutiques, flowers to fruits and veggies, solid colors to holiday themed.

“What I found is that I buy the fabrics I like, what I’d like to work with,” Desmarais said. “And I add stuff all the time.”

Both stores have patterns – and lots of them. And we learned the best way to sell a pattern is to make something out of it and hang it on the wall, something both shop owners like to do.

“You get a sample up there and it will sell,” Desmarais said.

They also have mats, rotary cutters, rulers and other tools to get you started.

But it isn’t all about going in to buy things. Sure, Gesen and Desmarais won’t complain if you do, but they also enjoy time spent with other quilting enthusiasts. That’s why they both have table areas where people can come and sew. Although when you get a bunch of quilters together, sometimes there can be a little more gabbing than sewing going on.

Desmarais offers classes each Wednesday evening, while Gesen is taking a little break from it right now and is happy with just opening up the shop for sewers to work. On occasion, Gesen will take on the task of finishing a project for a customer, but usually it’s one of her part time employees who does. She’s made a lot of quilts in her day, apparent by the fact she has a quilt for every bed in her lake house and just about every relative has at least one. She also has quite a few lying around her house and on the walls of the shop.

“I’ve made so many quilts over the years,” Gesen said. “My first (done all by hand) took me 10 years to finish.”

Part of that retirement plan for Desmarais we mentioned earlier was the purchase of a long arm machine that, in the simplest terms we can think of, puts the quilt together. It takes the piecing, which is the cool design of the cover, and combines it with the backing and batting (the middle comfy layer). She does about two quilts a week and presently has enough to keep busy for the next six weeks – and that doesn’t include any of her own personal projects.

“I’ve never hand quilted. I give those people all the credit in the world,” Desmarais said.

If you don’t have a clue when it comes to quilting, these are a couple of places to get started. They’ll help with fabric and pattern selections and space to do some work. They even offer free advice.

“People are afraid to put certain colors together,” Gesen said. “Sometimes we’ll have 25 to 30 bolts out before they make a decision.”

And don’t be surprised if you see some Christmas fabric come mid-summer. It takes a while to make a quilt, so they need to have material in plenty of time for the sewers to complete gifts. You’ve got to be ahead of the curve in this business because if you don’t have it, people will just go online. But there’s no substitute for the store setting.

“They want to see the quality of the fabric, feel it, see the true colors,” Gesen said.