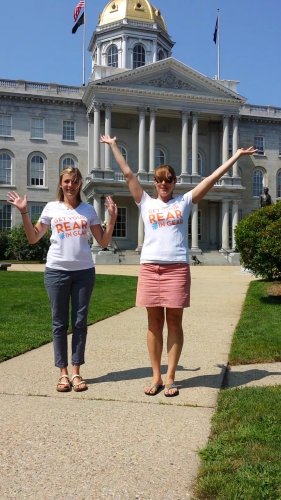 Is this a photo of Get Your Rear in Gear organizers Katie Robert and Sarah Moeckel doing the hokey pokey on the State House lawn? Why yes, yes it is. We recommend putting all of your hands and feet in and joining the cause Sept. 27 at Gould Hill Farm in Hopkinton.

Some things are just bound to catch the Insider’s attention. Like the words “inflatable colon.”

We can’t really imagine a scenario in which that wouldn’t immediately perk our ears up, but it’s especially effective when connected to a charitable event built on collaboration with tons of Concord people and organizations. That’s how the first Get Your Rear in Gear 5K Run/Walk, put on by the New Hampshire Public Health Association, wound up on our radar.

But mostly it was the inflatable colon.

The event will be held Sept. 27 at Gould Hill Farm in Hopkinton and will feature a kid’s fun run, a 5K walk and a 5K timed run. It will also include music from 93.3 The Wolf, plenty of food, raffle prizes – and the inflatable colon, which organizer Katie Robert of the New Hampshire Public Health Institute said could be positioned near the end of the race.

“That will likely become part of our finish line, (so runners can) run through the colon,” Robert said, and we’re not entirely sure whether she’s joking or not. “We’ve had so much community support. It’s been really nice because I’ve lived in Concord and worked in Concord all my adult life, and it’s nice kind of seeing the personal relationships. It gives you that warm and fuzzy.”

Indeed, although the event is not being held within the city limits, Concord’s fingerprints are all over it. The Public Health Association is based here, and donations and contributions to the event have come from numerous Concord outlets.

Cimo’s South End Deli and The Works Bakery Cafe have donated food, and Akasha Massage and Bodywork will be setting up to do offer post-race massages. There are raffle prizes from Joe King’s and also from Runner’s Alley, which will also act as the spot to pick up your bib the evening before the race. The Barley House has also offered to donate one dollar for every burger of the week that is sold throughout the weekend.

Saymore Trophy will be donating medals and helped create some signs, and Speedy Printing & Copying provided what Robert called “a ton” of big posters, small posters and postcards to spread the word.
“I’m definitely amazed at the donations,” Robert said.

The race was born out of the Public Health Association’s quest to get behind a charity event “where members could get involved and help support a good cause,” Robert said. Robert’s mother has been fighting colon cancer for the last 10 years, so she researched charities and pitched the idea, and she and Sarah Moeckel – both of whom were on the membership committee at the time – took on the task of organizing the event.

And it’s looking like plenty of families will be there. Robert wasn’t certain what kind of turnout to expect for the inaugural installment of the race, but as of the middle of last week there were already more than 120 people registered.

There’s been similar progress on the donation side, where Robert was told to expect anywhere around $1,000 or $2,000 – there’s already been more than $6,000 raised.

Robert and Moeckel feel like they know some of the people registering and donating already, too. The emotional nature of the topic and the hands-on requirements of planning have led to some rewarding relationships.

“There’s a couple of women in particular that have really been active helping to promote the race, and I’ve gotten such a good vibe from them,” Robert said. “Those small things really make all the hard work totally worth it.”

It’ll be worth it for the cause, too. Robert said she wouldn’t be surprised if the total amount of money raised tops $10,000, and she’s hoping to make a run at $20,000. Even if they don’t reach that total this year, she’s hoping they can next year, because this is shaping up to become an annual event.

“We’re hoping it becomes an annual thing. With our first race out, we’ve made our connections, people know the event, and because we have the national support, I think it’s going to look like a pretty polished, well-run thing,” Robert said. “I’m hoping we get some good visibility and it gets bigger. I wouldn’t be surprised if we crack $10,000 (raised) and head up toward $20,000 the way things are going. But if not this year, it’s always a great goal for next year.”

To register for the event, visit coloncancercoalition.org, and be sure to visit the Public Health Association’s Facebook page at facebook.com/nhgyrig for all the updated happenings.