Finishing is the only option for Barbrie in Spartan Death Race 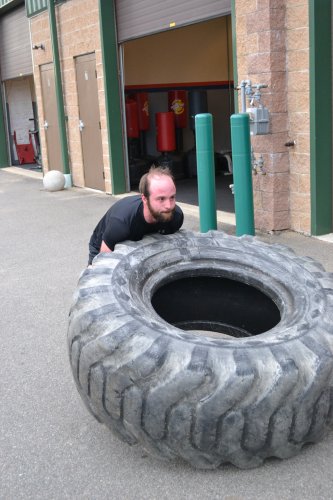 We always thought tire flipping was only part of the world’s strongest man competition. Turns out it happens right here in Concord, too. 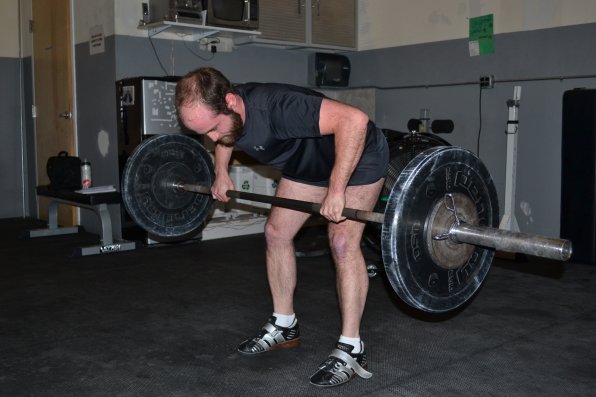 Adam Barbrie picks things up and puts them down in preparation for next month’s Spartan Death Race in Vermont. And don’t worry, if Barbrie doesn’t finish, he’ll still come home alive.

Adam Barbrie doesn’t really know what to expect when he arrives at the Spartan Death Race next month.

That’s because the race’s organizers haven’t told any of the 300 competitors what they will be required to do during a weekend in the woods of the Green Mountains.

What Barbrie, a 29-year-old computer network tech at PC Masters, does know is that he must arrive on the afternoon of June 27 with all the supplies he thinks he might need for up to 72 hours and that he should not expect to get a lot of sleep. He will also be asked to perform strenuous physical activities with only a moment’s notice. He’s also pretty sure if he doesn’t finish, he won’t have to die.

When it comes to the staying awake part, Barbrie isn’t too worried. He once spent 58 straight hours without closing his eyes (minus the blinking part of course), so what’s the possibility of another 14 mean in the long run?

But this won’t be anything like those all-nighters you pulled in college drinking beers at the local frat house. That’s unless they forced you to do some of the craziest athletic things you could think of – and we’re not talking about full contact beer pong.

So Barbrie knows he’s in for one heck of a weekend when he travels to Pittsfield, Vt. The race title itself should require a quick mental health check for all 300 entrants.

“Many people will say I’m nuts,” Barbrie said. “It’s kind of hard to explain a race that starts with death. It’s definitely for a different mindset.”

But the way Barbrie looks at it, at least he knows something before he arrives for what could be anywhere from two to three days of pure and utter pain. That’s because there is no official end to the race. It all depends on when they decide to declare it over.

As of now, Barbrie has a list of essential items he assumes he will need. He will bring an ax (because almost every year participants are made to chop wood for a few hours), a knife, bug spray, sunscreen and a water filter (because no water is provided). And of course food, like peanut butter and banana sandwiches, because you guessed it, no food is provided either. A week or two before the start, Barbrie will receive a list of up to 10 items he must bring and keep with him at all times – but that’s about it.

“A lot of it is the excitement of not knowing,” Barbrie said.

While the Spartan Death Race isn’t actually supposed to result in the loss of life, it’s main purpose is to get everyone who signs up to quit before completion. (Or before literally dying.) But Barbrie plans on being one of the few and the proud to make it until the end – whenever that happens to be.

“They always say things to make you want to quit,” Barbrie said. “They want you to quit. They’re looking for your breaking point.”

The whole idea behind the race is to challenge the mental and physical toughness of each competitor. That’s why everything is one big secret and why Barbrie has spent the last two years at Fun Intelligent Training preparing for just about anything. His death race debut was supposed to be last year, but a concussion kept him from competing.

“It’s basically whatever they feel like making you do,” Barbrie said.“I hope I find something I’m going to struggle with. I want the struggle. I’ve never quit anything in my life.”

So Barbrie spends anywhere from three to five days a week training at F.I.T. He does power lifting to increase his overall strength, most importantly his back and legs. It helps with his grip, as he will likely be required to continuously swing an ax for hours on end. There are sprints and circuit training to improve stamina and performance under difficult conditions.

“He’s a very highly motivated inpidual,” said Tony Pica, head coach at F.I.T. “I haven’t come across anybody who takes it as serious as Adam.”

Unlike a triathlon, iron man or marathon, there is no map or certain way things are supposed to go. There’s a 40-mile course through the Green Mountains and anything is fair game. It will test just about every bit of his will to survive and probably then some. In years past, participants have been ordered to build granite stair cases, hike for miles carrying rocks or cut a bushel of onions.

“They have to do a little bit of everything, so it’s a total body thing. You’ve got to be well rounded,” Pica said. “You never know what you’re going to get with a race like this.”

But Barbrie loves this kind of stuff. He has to in order to sign up for a race that includes death in the title. To prepare, he has done more than 30 obstacle course races, like the Tough Mudder, and GORUCK events that can last up to 12 hours. It’s the difficulty that keeps him going back for more.

And what Barbrie’s expecting for is the unexpected. Nothing is like the Spartan Death Race and he knows that. But he’s ready for whatever awaits him in the deep woods of Vermont.