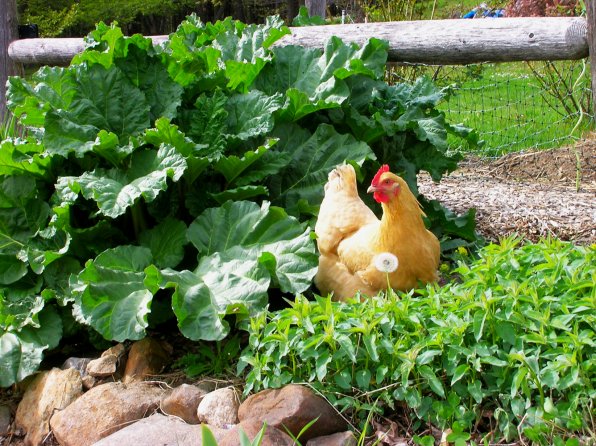 Chickens frolic amidst the rhubarb.

Rhubarb does not emerge softly from the soil in the spring. It explodes out of the ground, punching through the dirt with its pink-green fists. Those fists are tightly wrapped leaf buds, crinkly and small at the start. Upon discovering sunlight, the leaves rise into the air on their sturdy stalks, unfurling as they go.

When I was a kid, we had a giant rhubarb plant at the corner of our rock garden. It looked like a jungle plant to me – no plant with such enormous, lush leaves could be from Michigan! In fact, I was right. Rhubarb originated in China where its roots were used for medicinal purposes. It came from China to the Roman Empire, then to the rest of Europe and, finally, to America.

In the 19th century, folks started to look beyond the medicinal properties of rhubarb's roots and began to use the stalks. Sugar was the key, allowing people to transform this extremely sour plant into wine and desserts. As kids, we didn't always wait for this transformation. We ate it raw!

My mom showed us how to pull rhubarb by grasping the stalk firmly at the base, twisting it a little and giving it a good tug. It came away from the plant with a satisfying little pop. Then, of course, the leaf and the base needed to be trimmed. It was impressed upon us at an early age that the leaf was full of oxalic acid and poisonous when eaten. When the trimming was done, we would sit with our bowl of sugar, dipping in the ends and happily crunching away. It was a powerful sour-sweet sensation and, like all spring tonics, best taken in small doses.

Now, if rhubarb can grow in Michigan, it is certainly happy in New Hampshire. In my 25-plus years in this state I have been acquainted with more than one mighty plant. The rhubarb at the end of our driveway here in Concord is a transplant from Madbury. Rhubarb is no delicate perennial. Once it gets a good start, it can live for up to 10 years. A good start is achieved by choosing a nice sunny spot and adding a healthy helping of aged manure to the planting hole. To maintain a strong, vigorous plant, it is good to add some nice organic compost each spring and make sure it's well watered in dry months. We also give our plant a good cover of leaves for its winter sleep. One fall that cover was mistaken for a leaf pile and sucked up by the thoughtful city leaf collectors.

One of the most often asked questions about rhubarb is “How much can I take?” Go easy, is my advice. Harvest time is late spring to early summer. The first year after planting you shouldn't pull any stems at all. The second year is the “taste” year, so you can pull two or maybe three stalks. After that, the roots should be well established and you can start pulling more, always leaving at least two thirds of the stems unpicked. A good rule of thumb is to only pull stems that are about the size of your thumb or a little larger. The more red or pink in the stalks, the sweeter it is (that is, if you can call rhubarb sweet!).

At some point, rhubarb plants send up a flower stalk. The experts say not to let rhubarb bloom because the flower takes energy straight from the plant. When I first saw the giant flower bud, I had to let it bloom just to see what would happen. I was rewarded with an elegant plume of tiny white flowers.

I encourage you to plant rhubarb this year so you can witness the explosion next spring. Set it out front, where it will make a good neighbor-conversation-starter. Two of my neighbors have shared our rhubarb crop. Our plant straddles the property line with my next door neighbor, so it gets used by both of us. My neighbor across the street makes rhubarb pies for friends at the nursing home each year. When she runs short of her own rhubarb, she avails herself of ours.

Claudia Altemus tends her gardens in Concord. For more information about growing rhubarb and other perennial food crops, join the Capital Area Organic Gardeners on May 16 at 7 p.m. at the Grace Episcopal Church in East Concord. More info at ccognh.wordpress.com.