Need a lift to Montreal? Chip Marshall is your man

Home » Articles » Need a lift to Montreal? Chip Marshall is your man 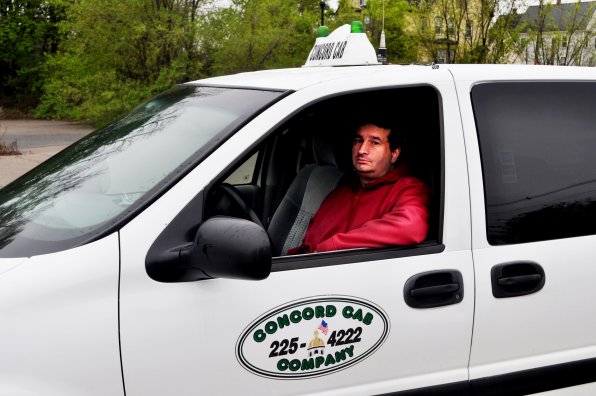 Chip Marshall is just waiting for the first person to hop in and ask him to "Follow that car!"

How long have you worked for the cab service?

Almost 10 years. And I've been a part-owner for about five.

Are you on-call 24/7 or are there times when people can't get a cab?

No, we're open 24/7. We're down in the city the whole time, and there's usually two cars on right up through the evening. You'd be surprised how many people are out at 2, 3 in the morning, all through the week.

What are the most popular spots people get rides from?

The hospital is big, and grocery stores, mostly on Storrs Street. All of our drivers will help with carrying groceries and stuff like that. We definitely do a little more than some other cab companies will do. I put together a recliner for a women one time. And we've helped people move, just fill the van up with bags of clothes and smaller furniture items.

We do a lot of contracts, too, like picking up people for workman's comp. I sat in the parking lot of a hospital for eight hours waiting for someone to come out. You never know, every day is different and new.

I don't know; they just never really have been. My father and I tried to make of all our vans white, but now everyone that drives owns their own vehicle, sort of like independent contractors. But we try to make sure they are all vans of one type or another.

Who is your favorite famous taxi driver?

If I had to pick one, I'd say Tony Danza from Taxi. He was always the most amusing to me on that show. And that was a good show.

Has anyone left anything particularly awesome in your car?

Not really. People have left phones, tons of phones. Every now and then some money is dropped. And sometimes a bag of groceries or something. Nothing really weird or scary, though, thankfully.

Has anyone left anything that is not so awesome in the car?

Oh yes, people get sick or lose control of their functions. But that's what we're here for. They pay for any cleaning costs if they throw up in the car or anything, and we try to make that clear up front if we think someone might have some trouble. That's probably the most unpleasant part of the job. But in 10 years of doing this, it's happened to me just once. It was a lawyer leaving her company Christmas party, and a bunch of friends of hers decided they didn't want to drive her home. It gets pretty interesting at times.

How far do you drive people if they ask?

We've gone to Montreal, to New York City. We'll go wherever. We go to the Manchester airport all the time. I think the furthest was JFK in New York; it was a guy who lived in Manchester, and nobody in Manchester would take him all the way, so he called us.

Have you ever had anyone get in and say, “Follow that car!”?

No, I haven't had that opportunity yet. Almost all of our pick-ups are calls, we don't drive around looking for people.

Have you ever had an accident while driving the cab?

I haven't, but we've had a number of them. But of all the ones that have happened, only one was the cab driver's fault. Most of it is people running red lights a lot. People just don't pay attention. But all but one of them were minor fender-bender types.

Do you ever have someone else drive you around when you are not on the job?

Oh, yeah. Back when I had a couple of cousins around, we used to go to the bars every now and then, and I'd call the cab company. That's why we're out here at night. I'd be a fool to ignore that.

What do you prefer to be called: Cabbie, hack, cab driver, taxi driver?

Cab driver is usually what people call us. But we do a lot more than that. We do a lot of work with the elderly, at Havenwood, taking people to doctor's appointments and things like that.

Has anyone ever told you a memorable story while riding in the cab?

Oh yeah, I've heard some interesting stories. People definitely tell you sometimes a lot more than you want to know. That's why the job is interesting.

Have you ever busted anyone for hanky-panky in the back seat?

I haven't had that. (Fellow driver Nelson Wescomb added that “10, 12 years ago we used to have a lot of wild nights, but now we've got very little bar scene.”)