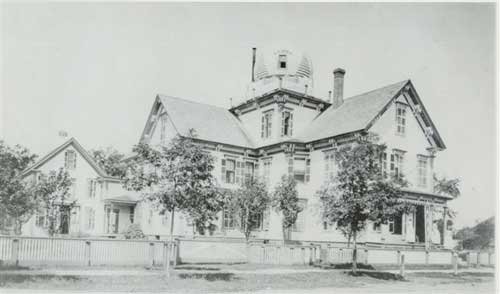 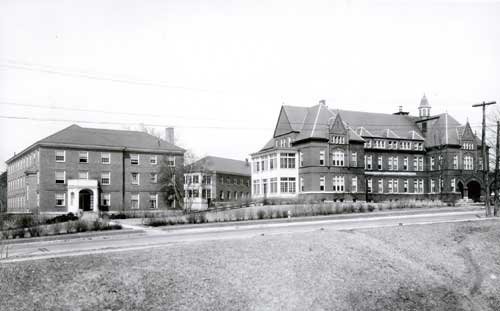 The Concord Historical Society reveals the answer to last week's question about what South End landmark is featured in the photo:

Pillsbury Hospital, the first general hospital in New Hampshire, was built on South Main Street in October 1891, and the cross-street bears its name. It was at the end of the public trolley line and named after George Pillsbury, a 19th-century Concord mayor. The hospital made its mark by pioneering new surgical techniques that demanded cleanliness and saved lives by preventing infections.

The Pillsbury Hospital is remembered today as one of the office buildings on the Concord Hospital campus. The story of how Concord matured into a regional health care center is a fascinating one, told by the Concord Historical Society in “Crosscurrents of Change,” the history of Concord in the 20th century. The book is scheduled for publication later this year.

Readers also chimed in with their own memories and historical tidbits:

Eveleana Gifford remembers the Pillsbury Hospital firsthand – she was there during World War II, before and after graduating from the nursing school. The building on the left, she said, was the residence for student nurses. There was a big living room for parties, and it was a popular spot for the nursing students to entertain their boyfriends. The building in the middle is the hospital annex, which she said is still standing. It was jokingly referred to as the “ivory coast.” On the right is the Margaret Pillsbury General Hospital, which, she added, was named for a relation of the Pillsbury Flour founder.

Here's a note from Charlene Mayo: “It was on the corner of South Main and Pillsbury streets. You can still see where the street bumps out on Pillsbury with three or four steps. They went up to the front door. George Pillsbury, of the family of Pillsbury flour fame, donated the money and the land for the hospital. It was dedicated by him and named after his wife (they had been married 50 years) in October 1891. The hospital was taken down around 1970.”

And last, but not least, a word from Earl Burroughs: “In 1890, George Pillsbury of Minneapolis, a former resident of Concord, returned to the state for a visit as well as to present gifts to different towns. He gave a monument to Sutton (where he was born) to honor its heroic dead in the war between the states. He also gave a public library building to the town of Warner, where he grew up, and then arrived in Concord to give to a worthy charity. When he learned of Concord's need for a larger and more modern hospital, he met with Dr. Conn and they worked out the many details before making them public.”

“The building was completed and furnished in 1891. . . . The first patients were transferred to the new hospital on December 15, 1891. In 1889 a school of nursing started up. Miss Harriet Sutherland was the superintendent. The Margaret Pillsbury Hospital would remain open until 1954 or 1955 – I spent one night there in 1952.”