The story behind Indian Pipes 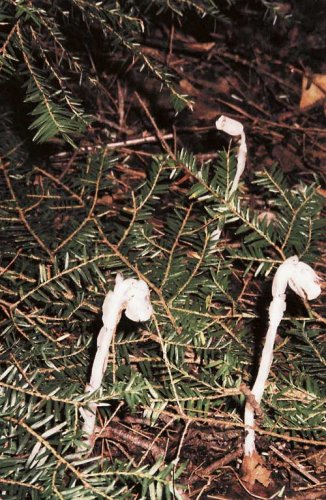 Hikers along woodland trails this summer are apt to see pure white waxy plants about 6 to 10 inches tall that are shaped like pipes. They are called by various names, the most common of which is Indian Pipes.

Although they look much like fungi, they are actually non-chlorophyll flowering plants in the heath family.

The Indian Pipe flower derives its nutrients from a fungus that in turn gets its food from the roots of such trees as pines, oaks, beeches and hemlocks. Wherever you find Indian Pipes, you are sure to see one of these trees close by, with unseen underground fungi serving as intermediary hosts in the transfer of food.

Since they have no chlorophyll and do not depend on the sun to manufacture their own food, Indian Pipes can grow in dark shadowy places where sunlight is in short supply. The stalk has a single flower, which in the fall produces seeds so tiny they have no stored food and must rely on a fungus to give them nourishment.

The plant's deathly pale flesh has resulted in much eerie folklore and across the years it has accumulated names like ghost plant, corpse plant, ice plant and fairy smoke.

Native American healers have mixed the plant's juices with water to use as a lotion to treat eye problems, which has given the plant yet another name: eye bright.

The plant's colorlessness amid the bold colors of summer causes many hikers to stop and ponder the flower's place in the natural world, but it is just one of about 3,000 species of non-photosynthetic flowering plants.

In the early 19th century, Alice Morse Earle wrote of the Indian Pipe, “It is the weirdest flower that grows so palpably ghastly that we feel almost a cheerful satisfaction in the perfection of its performance, just as we do in listening to a good ghost story.”

One person has described the plant as looking like a corpse's knotted fist reaching out of the grave. (Ed. – Awesome. We'll remember that next time we're hiking.)

When you walk through the New Hampshire woods and come across the Indian Pipe flower with its striking whiteness as a haunting apparition in the middle of summer's greenery, you may want to create your own story of flower ghosts and phantom fairy tales that can be told around the evening camp fire.