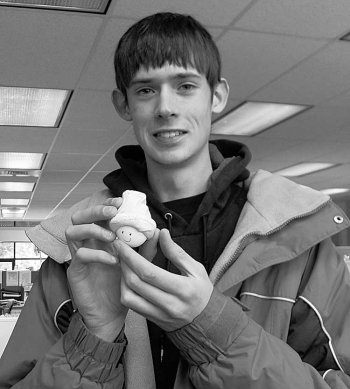 I have no designs on becoming a parent anytime soon. In fact, if I was to listen to a former teacher of mine, I wouldn't even get married until my mid-30s.

Additionally, being a guy, I never hired myself out as a babysitter and thus don't exactly possess many “taking care of young children” skills beyond the innate sense that dropping them on the floor is a no-no. So, of course, when I asked the Insider to give me something to do while home from college, they decided to have me take care of a baby for 24 hours.

Okay, it was an egg with a baby sock on its head. But it was supposed to represent a baby, much like those projects many people had to do in their high school health class. I was not one of those people, however, and therefore didn't even have any experience caring for what I was supposed to imagine was a baby.

Though the odds were seemingly stacked against me, I thought “what the heck” and drove to the Monitor to pick up my assignment.

I was greeted in the Insider cubicle by an egg that had had a smiley face drawn near the bottom, and a baby sock pulled down over the top as a kind of quasi-hat. After reviewing my instructions and guidelines, I left to go home, pondering what I could name my new egg. I tried first looking at it to see if anything sprang to mind based on appearance alone. When it didn't, I changed tactics and tried to find a cool name. All I got was Ace, and that seemed like a better nickname than real name, so I ditched it. Suddenly, a name hit me. Walking out to the car, I looked down at my egg and named it Buster.

I was immediately presented with my first problem – how best to safely get Buster home. My first thought was to put it in a cup holder, maybe lined with something soft. However, the family van doesn't have any cup holders. I next considered putting it in one of the door compartments, but none of them were big enough. All that was left to me was the passenger seat, which is where I put Buster. I started to put the seatbelt across him, but then realized it would just as likely crush him as hold him still. Not wanting to leave him totally unsecured, I finally decided on putting him between two mittens. Buster managed to stay put during the bumpy ride back home, and I realized to my surprise that despite it being only an egg, my head was on a pretty constant swivel between the road and the passenger seat.

Once I got home, I had to find a way to break the news to my family that I was now a father. Considering that it was only to an egg, and only for 24 hours, they took it quite well. For much of the next hour or so, I just carried Buster around with me in the house, setting him down for a while so he could watch me play Guitar Hero.

Eventually, we left for the movies to go see “Valkyrie.” Realizing along the way that I could very well be seen carrying around an egg wearing a light blue baby sock, I made the small concession of keeping Buster in my pocket – ostensibly to keep him warm. Once in the theater, I took him out and put him in the cup holder for the entire movie. He was back in my pocket for the ride back, and carried around again at home for a while. After dinner, he was again plopped down to watch another movie, this time “The Dark Knight.” Yes, I realize that both movies were inappropriate for babies, but he couldn't see a thing out of the cup holder during “Valkyrie” and I'm pretty sure he fell asleep during “The Dark Knight.” So there.

After the movie, I went downstairs with Buster to watch TV with my brother. Seeing that his sock hat had slipped down onto his smiley face, I started to roll it back up. Unfortunately, eggs being shaped the way they are, this resulted in me losing my grip on poor Buster. In an instinctive move to keep him from falling and exploding on the ground, I quickly brought him up close to my chest. In a tragic turn of events, I brought him just a bit too close to my chest and smacked him right into my sternum. Fearing that I would look down and see egg spilling all over, I was surprised to not see so much as a drop of yolk on my shirt. In fact, there didn't even appear to be a crack on Buster. I was turning him over and about to let go a sigh of relief at having dodged a major bullet when I saw it. On the back of his head was a large dent, augmented by a long crack on either side stretching nearly from top to bottom. My heart dropped – for a split second, I forgot that what I was holding was only an egg and not an actual baby. For as bad as I felt, it could very well have been an actual baby. Once I remembered that it was, actually, an egg, I took stock of the situation.

Miraculously, Buster was not bleeding at all, having suffered a rare kind of open skull fracture that doesn't involve any blood loss. After staring at him for a few minutes, I broke the news to my parents that I wasn't qualified to be a father. My mom, after assuring me that taking care of an egg is far different than taking care of a baby (which I fully agree with), suggested putting Buster on life support, which consisted of sticking a Band-Aid over the crack. I wanted to put him somewhere safe for the night, so I put him on the dining room table and left him alone until morning. When I woke up the next day, Buster was still alive down on the table.

Since the 24-hour mark had already passed, I declared the day a success – or as much as a day with a skull fracture can be a success. Rest assured, however, that when I have kids, I won't consider days with skull fractures to be successes.